Mega-fan has spent £20K following JEDWARD around the world!

Catia Sousa with Jedward outside Sky Studios in July 2011. See SWNS story SWJEDWARD: A die-hard fan has spent a staggering Ã20,000 following JEDWARD around the world and has attended more than 400 of their concerts. Dedicated Catia Sousa, 20, became obsessed with quiffed identical twins John and Edward Grimes after they shot to fame on The X Factor in 2009 and has not looked back. This year alone she has been to more than 50 Jedward events including concerts and fan meet-ups and has spent all her earnings, savings and student loan on them. Single Catia even took two years out after school to dedicate her life to the boyband and postponed her degree at the University of London until this year.

A die-hard Jedward fan has spent a staggering £20,000 following the identical twins around the world – attending more than 400 of their concerts.

Dedicated Catia Sousa, 20, became obsessed with John and Edward Grimes after they shot to fame on X Factor in 2009 and has not looked back since.

She has been to more than 50 Jedward events this year alone – visiting 18 cities in 10 days – and has spent all her earnings, savings and student loan on them.

Single Catia even took two years out after school to dedicate her life to the boyband and postponed her degree at the University of London until this year.

The biomedicine student recently took two weeks out of her degree and spent £1,600 flying to Los Angeles – to hand-deliver the birthday presents she bought for the singers.

But when she got there, the 24-year-old twins were nowhere to be seen.

Catia said: “It was the most spontaneous thing I’ve ever done. I had no idea where they were, other than that they were hanging around Hollywood and Beverly Hills.

“Someone tweeted a picture of them in Starbucks so I went there every day – but the one day I overslept they went in the morning and I missed them.”

“I didn’t find them for two weeks, so I couldn’t give them their presents. I bought them some Jeremy Scott shark shoes after their cameo appearance in the film Sharknado.”

Earlier this year Jedward did a tour of Europe and Catia made sure she not only went to each appearance but joined them on their flights and stayed in the same hotels.

On one occasion, she says she had to lend them £600 of her own money when they lost their credit cards and couldn’t pay for the hotel.

And she has spent so much time with the hyperactive pair over the years they have almost become friends.

“When I see them it’s just like seeing friends because I see them all the time, ” she said.

“I don’t travel half way round the world for my friends though. I have always preferred John, because he’s more chatty, but I get on with them both quite well.

“Everyone knows I’m their biggest fan, because they have even mentioned me in some interviews before. I get hate mail from people calling me a stalker.

“But I don’t consider myself a stalker, because I don’t go to their home or anything.

“I am the only fan that has been to everything they’ve done this year. I went to 18 cities in 10 days with them in the summer.

Her love for them might be lost on some, but Catia said the pair make their fans feel much more special than most celebrities and have been a constant support to her.

“They’re down to earth and genuinely enjoy spending time with their fans,” she said. “They always make an effort to connect with you personally and make you feel special.

“It’s an amazing feeling when rather than making small talk like you’re just another fan, your idols talk to you about memories you’ve shared together in the past.

“I think the reason I see them so much is because I can’t get that feeling from anywhere or anyone else.

“They make me so happy and after struggling with things at home, the overwhelming happiness they give me every time I see them- whether for the first time or the 500th time – is priceless.”

Her family and friends don’t always see eye-to-eye with her never-ending support for the singers, but it doesn’t deter her.

“Some of my friends are fans as well but none as extreme as I am,” she said. “My sister doesn’t like them at all and is always telling me I’m crazy.

“I prefer going to concerts with people but it can be difficult persuading my friends sometimes so if I have to go on my own, I will.”

Unsurprisingly she has already planned when she will see the twins next, but has made life more difficult and expensive for herself just to spend more time with them.

“I am going to see them in Hamilton on 7 November, but I will go via Dublin so I can catch the same flight as them,” she said.

“I don’t know exactly what flight they are on so what I normally do is either book a last-minute flight when I do know or buy every flight going their route that day and only take the one flight.”

And the singers’ more conservative new hairstyle, which they unveiled this week, doesn’t bother Catia one bit.

“I actually prefer them without their quiffs, I think they look better,” she said.

“They are trying to shy away from their image and get people to take them more seriously, so I think that’s why they’ve done it. They’re also writing their own music too.” 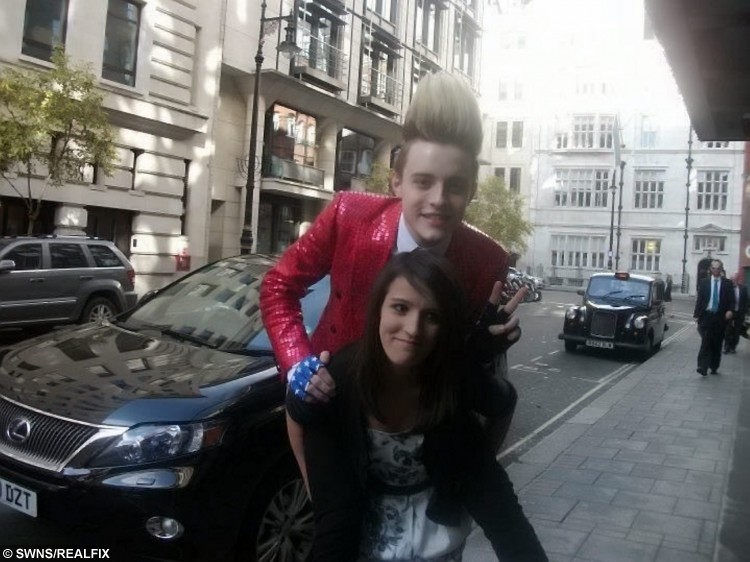 Bride and groom celebrate their big day with life-size wedding cakes of themselves!

Bride and groom celebrate their big day with life-size wedding cakes of themselves!