Picture shows Angie Cox of Doncaster, a naturist farmer. Angie has bee a naturist since she was three years old. The family of naturists run a campsite on the farm set up for naturists in South Yorkshire. See Ross Parry copy RPYNAKED : A sleepy rural village is set to bare all when it is inundated with crowds of people in the NUDE. Naturists from across the country will be stripping off to enjoy barbecues in the buff, naked darts and nude yoga at a week-long festival. Long-time naturist Angie Cox, who will host the Nudestock festival at their dairy farm, are looking forward to kicking off this years festivities. The sixth annual festival in the rural village of Wroot, South Yorks., will see people getting back to nature by ditching their clothes for eight whole days for the gathering - one of the biggest of its kind in Britain. Tom Maddick / Rossparry.co.uk

Long-time naturist Angie Cox, 34, is proud to get her kit off at the annual Nudestock festival which is hosted at her parents’ dairy farm in Wroot, North Lincs.

In fact Angie, who has enjoyed being in the buff from a young age, says she is the one who encouraged the rest of the family to get back to nature.

She said: “Mum saw how much fun I had, and as time went by, she decided it to give it a try herself.

“When I was almost three, we went on a day trip to the seaside. It was a scorching hot day and when we came across a nudist beach.

“Before long, we were a naked family of four, tucking into our picnic without a care in the world. And from that day on, we became fully-fledged naturists.”

Colin, 63, and Carol, 59, signed up with the British Naturism group and when Angie was a teen she became a member of the youth section.

The couple and their children continued to enjoy the naturist lifestyle, going for nude swims and holidays across the UK with fellow nudists.

But it wasn’t until 2005 they hit on the idea of opening their own campsite for like-minded men and women.

Colin said: “We couldn’t leave the farm because of the cows needing milking, so we invited some naturists friends over to spend the weekend with us. That was when we thought we could open up our own site.”

Since then, the couple have received visitors from across the country, working in conjunction with national organisation British Naturism, which manages the site and festival, which ﬁrst started six years ago.

Colin said: “It is always a good week and we can’t wait for this year’s event. We have great fun and everyone has a really relaxing time together. People often get the wrong idea of what naturism is all about.”

The couple and their children – son Tom and daughter Angie – now stage Nudestock at their Candy Farm home.

This May, nudists from across the country stripped off to enjoy barbecues in the buff, naked darts and nude yoga at a week-long event.

The farmland is normally devoted to grazing cattle but was turned over to a campsite and facilities for people who prefer going about their business in the buff.

Guests chilled out in a hot tub, took part in nude exercise and walks as well as a host of other family activities.

Angie said: “We were all born naked. Wearing clothes is like wearing a uniform – it says something about you and what you do.

“We are all the same underneath.

“When you take your clothes off, you don’t have people judging you. We all have bodies of different shapes and sizes but when you are a naturist, people don’t look at that. That’s the appeal of it.”

And the family say that anyone who has never tried naturism should give it a go, with members ranging from eight to more than 80 years old.

“It is liberating and is good for you,” added Colin.

“I would encourage everyone to give it a go. People can come along and see what its all about but there’s no pressure for people to get undressed.

“But more often than not, they see every- one else wandering around naked and feel left out, so before long, they are getting their clothes off too.”

“People think naturism is sexual, but its not. So many people think its to do with wife swapping but its nothing like that at all.

“And people think we walk around naked all day every day, but we don’t.

Further details about the festival are available at www.candyfarmcampsite.co.uk 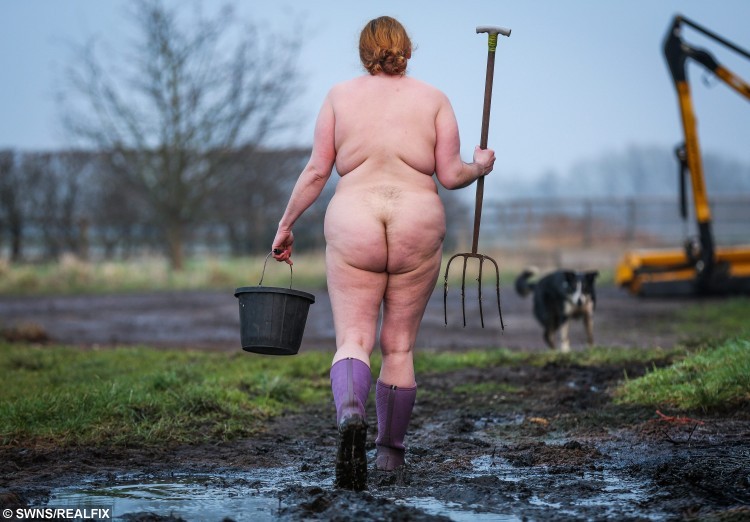