Newlyweds arrive at their reception in a fairground dodgem!

by RealFix
in Bizarre, Most Popular, Relationships
0

Collect of Jackie and Ray Naylor on their big day were they used a converted dodgem as their wedding car. The bumper car was put together by the bride's brother Paul Ward. See Masons story MNBUMPER; A couple had a bumpy start to their marriage when they turned up to their wedding reception in a dodgem. Jackie Naylor, 47, and husband Ray, 50, spurned the traditional horse-drawn carriage or limousine when they got hitched. Their carriage was instead provided by the brideÃs brother, Peter Ward, of Salmon Crescent, Minster, who has a growing collection of nearly 50 vintage bumper cars, some of which he has converted to be roadworthy. The vehicle took six weeks to get ready as it was sprayed white, had a Just Married licence plate installed, a bow tied around a Mercedes ornament on the bonnet, and tin cans tied to the back.

A pair of newlyweds’ marriage got off to a bumpy start – when they arrived at their wedding reception in a fairground dodgem.

Ray Naylor, 50, and bride Jackie, 47, spurned the traditional horse-drawn carriage or limousine for a bumper car provided by her brother Pete Ward.

Jackie quipped that she and her new husband had been “dodging relationships” after they each had two failed marriages before falling for each other.

She said: “We were both dodging relationships after two divorces but when we spotted each other at a beer festival it was love at first sight.”

The love-struck couple arrived at their Nottingham ceremony in a bumper car provided by Pete, 54, from Minster in Kent, who collects dodgems as a hobby and installs electric engines in them.

Jackie, who is a part time pottery painter and has two sons from a previous marriage, says she “didn’t really get a choice” about the unusual wedding transportation. 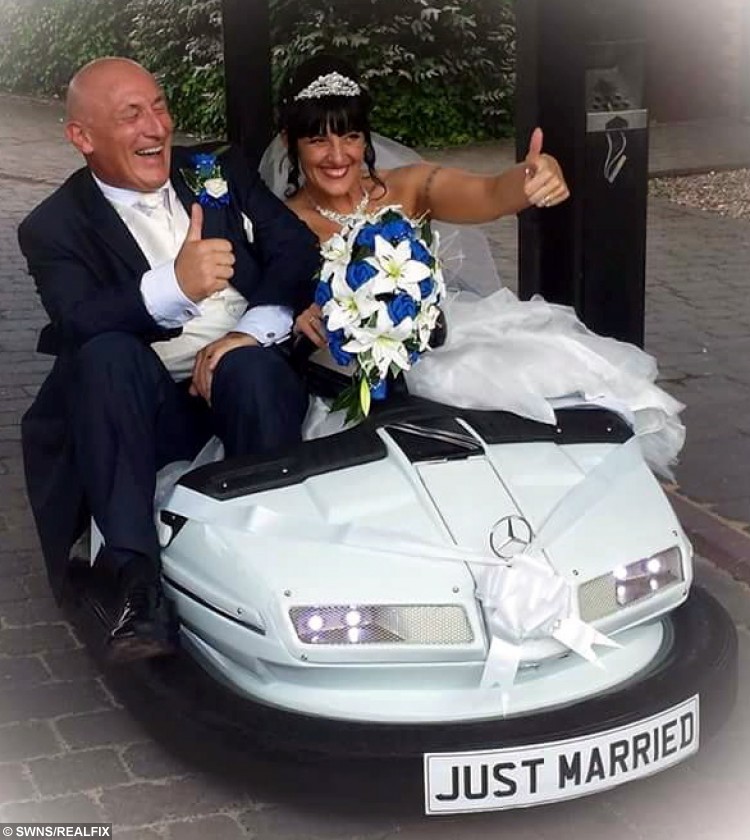 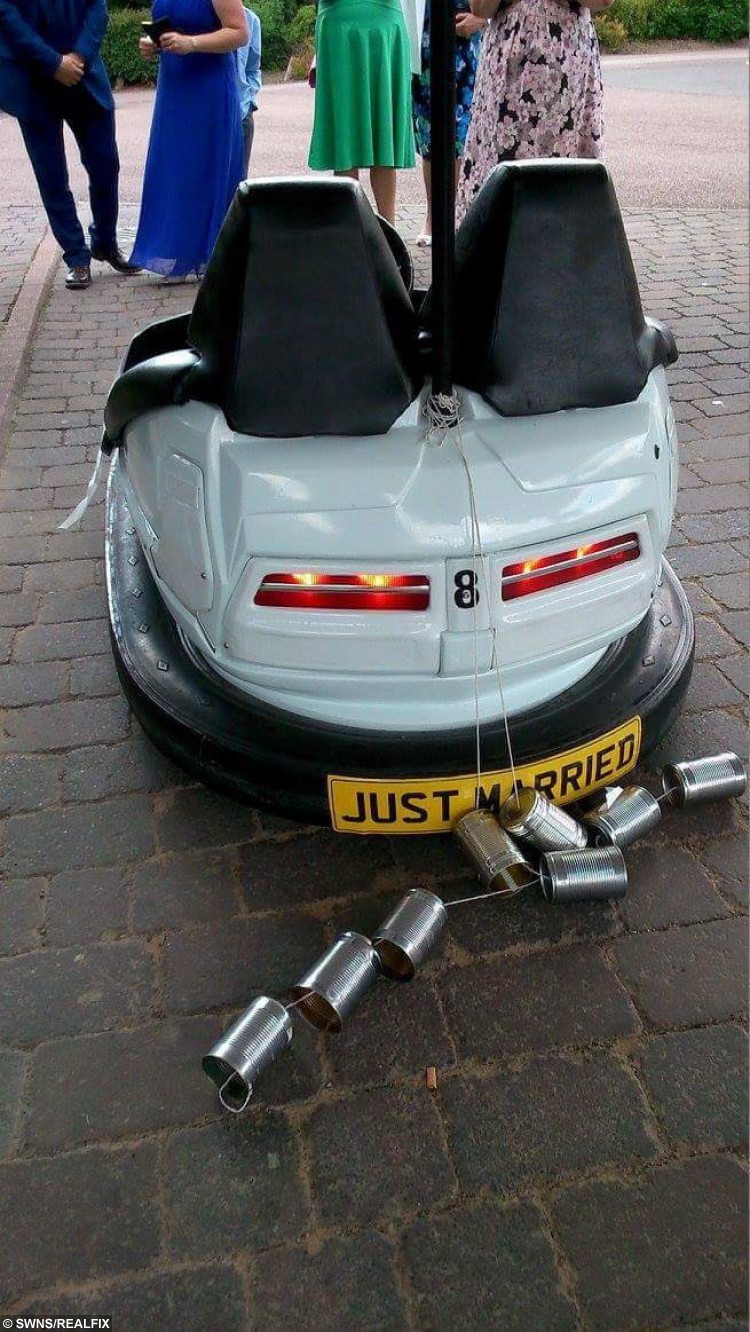 However, because Ray and Pete were so excited by the whole idea of it she “didn’t really mind.”

She said: “My only worry was getting into the car in my wedding dress, but Pete reassured me that it was absolutely spotless.

“If I had the chance to relive my wedding day I’d definitely have the bumper car again. It was brilliant – we all took turns driving it and even the staff joined in.”

According to Jackie, Ray, who was an officer in the Royal Marines and is now a quantity surveyor, “has quite a serious job so when he gets the chance to let his hair down – which is ironic as he’s bald – he jumps in feet first.”

Jackie’s brother has 50 dodgems, some of which he has fitted with mobility scooter engines so that they are ‘drivable’.

He bought his first dodgem over eBay for £50 and was inspired to search the site for dodgems after a close friend told him he was buying himself a dalek for his personal ‘man cave’. 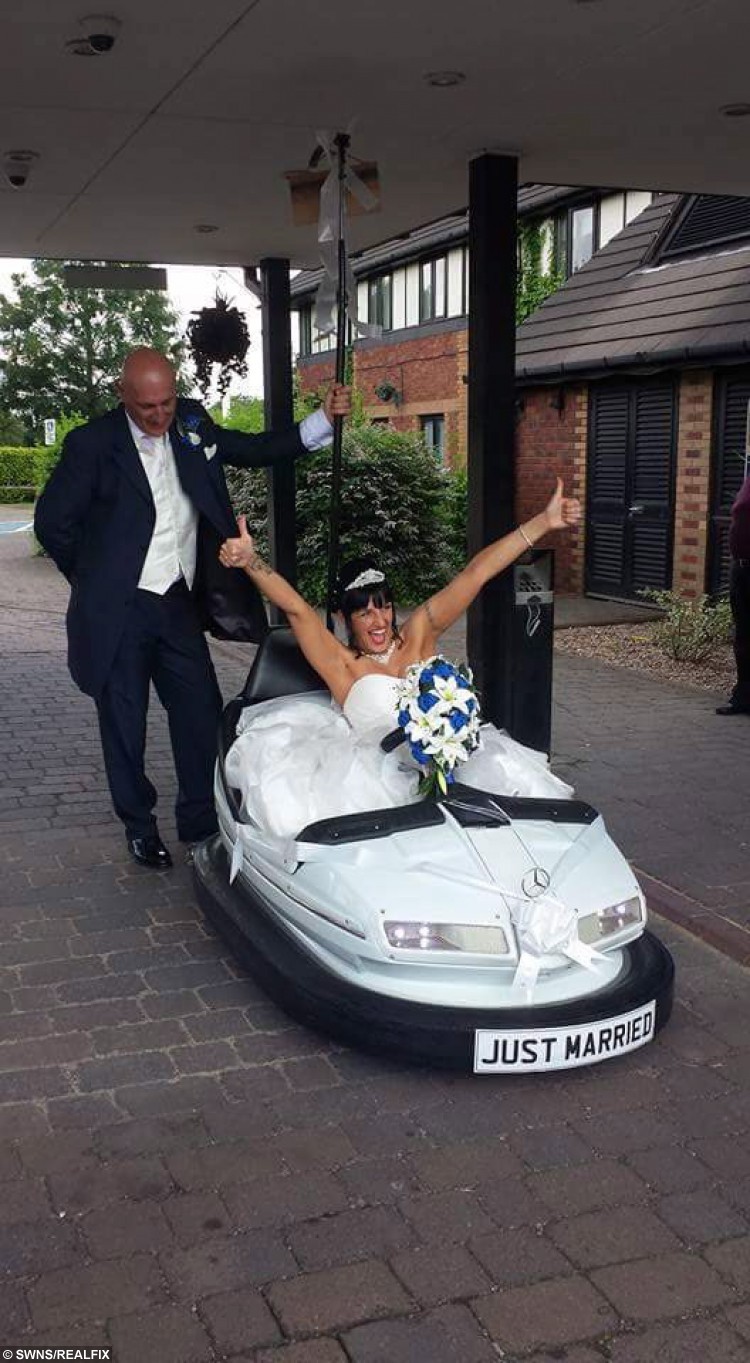 As he’s made a name for himself in the dodgem world, people – particularly fairground workers – often contact him when they’re planning on sending their old vehicles to the junkyard.

Pete was inspired to create the wedding-themed dodgem after he took a day out with Ray. The pair took one of Pete’s bumper cars round a McDonald’s drive-through.

He said: “He loved the smiles and attention he got, and at the end of the day he turned to me and said ‘you’ve got to do one for my wedding!'”

He added: “My sister and I are a chip off the same block – we’re both mad, so she loved it.

“Ray’s a big bloke so seeing him in a little bumper car was pretty funny.”

Pete says that although his dodgy hobby does take up a lot of his spare time, his wife is “used to his madness now.”

However Melanie, 52, who has been married to Pete for 24 years, says that her husband’s bumper obsession is “frustrating because it take up a lot of his time.”

She said: “He only told me he was collecting dodgems when we were going round to our friends’ for fireworks night and he worried that someone else would tell me before he did.”

“Originally I thought that his hobby would mean that he was at home more, as he’s one of those fellows who is out a lot.

“However he soon began working from a lockup so now he’s out of the house even more than before.”

Melanie and Pete have 17-year-old twins, Kelly and Nicky, who their mother says are ’embarrassed’ about their dad’s unusual pastime.

Melanie said: “Maybe one day when they’re older they’ll realise that the dodgems are fun and bring a smile to everyone’s face, but right now they’d rather not get involved.”

Ray was in the Royal Marines for 12 years and served multiple tours in Afghanistan, Iraq and a peacekeeping mission in Bosnia.

All pictures copyright of Paul Pearson. 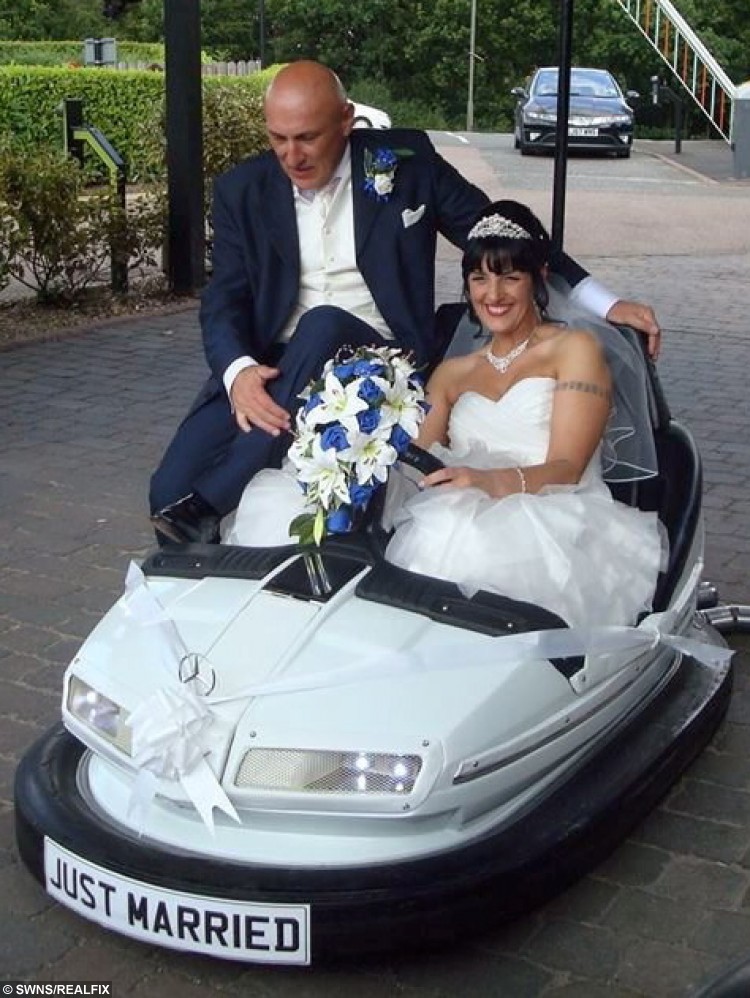