A shopper was left gobsmacked after spotting a TOPLESS Disney princess on a child’s swimsuit in Asda.

Chelsee Mosson, 22, said she was disgusted after coming across the x-rated image of Ariel from the Little Mermaid appearing to be nude.

Due to a printing error when being manufactured, the 1989 Disney’s character’s famous shell bra had not been printed giving customers an eyeful.

The university student made the shocking discovery on the rails at the supermarket at Ventura Park in Tamworth, Staffs., on Tuesday (20/6).

She had been shopping with boyfriend Daniel Bayliff, 22, a health care assistant, for clothes for their holiday to Greece next month.

But she says she was left stunned after spotting the colourful Asda George swimsuit for children aged 3-4 on sale for £7 with one major design flaw.

Today Chelsee, of Burntwood, Staffs., said: “We had been shopping for our trip to Greece for holiday clothes when I spotted it.

“I couldn’t believe my eyes. I thought ‘that isn’t right’.

“To see Ariel without her trademark shell bra has scarred me for life and ruined a childhood classic.

“She’s a much-loved Disney character from a children’s film. She should definitely not be in the buff, that’s for sure.

“I grew up watching this film and it’s certainly not how I remember her looking. It’s outrageous.

“How on earth nobody has spotted that is beyond me. It should not have slipped through quality control and then shop floor staff should have noticed it too.

“It was right on the front of the rail – anybody could see it. Its disgusting really, a child could get really confused by that.

“Its really bizarre. Me and my partner were quite shocked about it.

“We both said if the design was to have a bikini top sewed onto it, it should have had a bikini top printed on too just incase something like this happened. 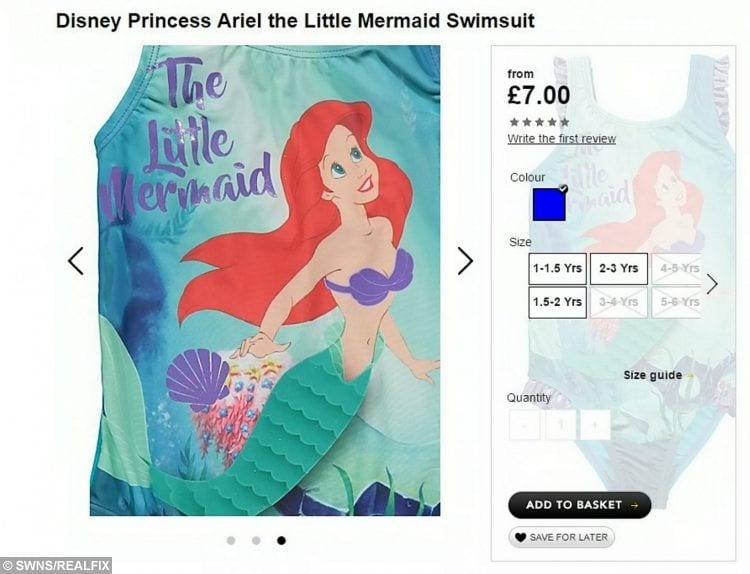 “They need to remove it from the shelves immediately.”

Chelsee, who has just graduated from Staffordshire University with a sports development and coaching degree, contacted Asda on Twitter to ask for an explanation.

She wrote: “Absolutely mortified to see this on Asda’s shelf this evening @asda A 3-4 year old swimming costume. What’s going on?”

She added: “They just replied and said it was a printing error on the costume and the manager had been informed.

“But it makes you think whether any others could have slipped through the net.

“It might be the idea of some people’s weird fantasy – but it should definitely not be on display in a supermarket and sold for children to wear.

“Imagine if you spotted a kid wearing that on your summer holidays, you’d be absolutely mortified.”