Take two Darth Vaders, a Storm Trooper and a Wookie and you’ve got yourself one heck of a wedding

Lee Bowder and Pip Stephenson at their Star Wars themed wedding in Chesterfield. See Ross Parry copy RPYSTAR : The force was strong at Chesterfield Registry Office on Friday when a cast of characters from a galaxy far, far away arrived to celebrate the wedding of two of their own. A stormtrooper stood guard as a wookie, two Darth Vaders, an Imperial Guard and a Princess Leia arrived along with many other guests more traditionally attired. Fulfilling their destiny were Lee Bowder and Pip Stephenson from Selstone, who are both active members of the East Midlands Garrison, a Star Wars ÃcosplayÃ organisation based in Derby. Groom Lee Bowdler, dressed immaculately in a cream jacket and red cravat, said: ÃI just thought it would be nice for the area and might put a smile on people's faces.

A Star Wars mad bride and groom had the force behind them when they were joined at their wedding by a wookie and TWO Darth Vaders.

Lee Bowdler and Pip Stephenson fulfilled their destiny as they said their I do’s and proved they are the Obi-Wans for each other.

A stormtrooper stood guard at the ceremony while a wookie, two Darth Vaders, an Imperial Guard and Princess Leia arrived to join the celebrations.

Lee and his bride Pip are both members of the East Midlands Garrison, a Star Wars “cosplay” organisation based in Derby.

Groom Lee, dressed in a cream jacket and red cravat, said: “I just thought it would be nice for the area and might put a smile on people’s faces.

“Pip wasn’t into it to start with but now she loves it and dresses up as a Shadowtrooper and a Twilek.”

Bride Pip, in a beautiful sequinned dress with a train as long as an Imperial Star Destroyer, said: “We just wanted all our family and friends see us doing what we like to do.

“And it also means that everybody doesn’t have to go out and buy a new outfit.”

The group get together every fortnight to attend conventions and raise money for good causes.

When the couple, of Selstone, were to be married, the chance of having a Star Wars themed wedding was too good to pass up.

Darth Vader, aka Glenn Baggaley, who was there with his wife Paula, said: “We’re just a group of people who are really passionate about Star Wars. 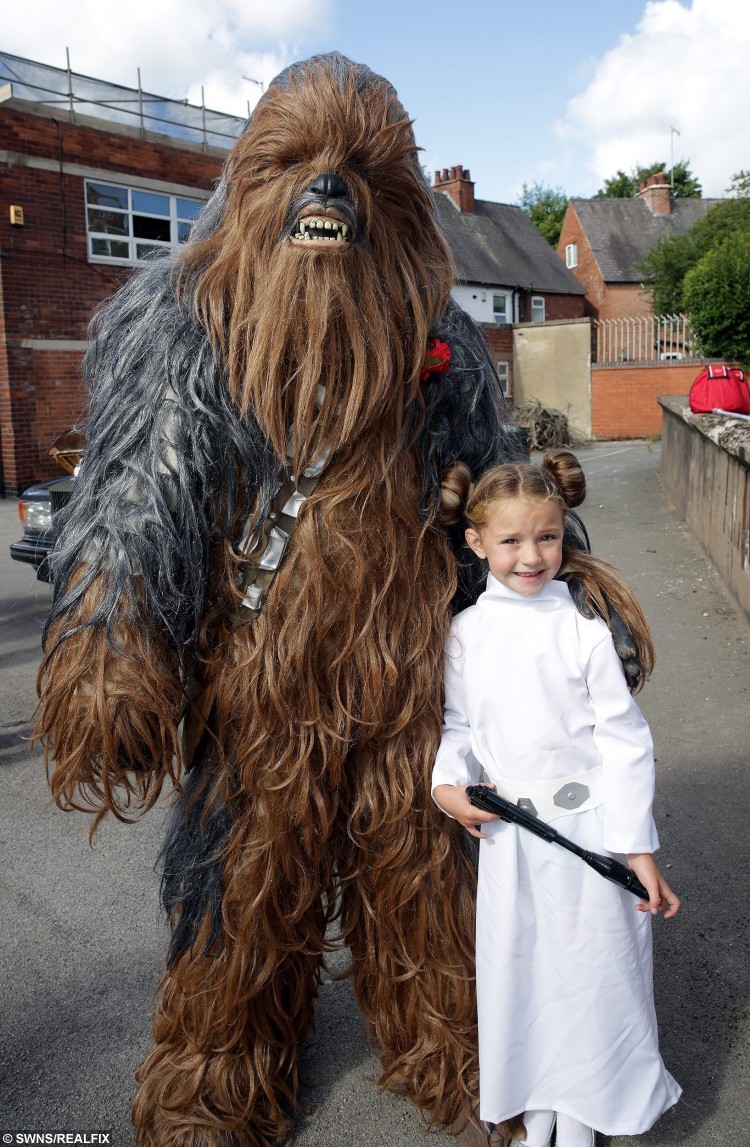