Steve Holden and his wife Karen Ruffell pictured on their 'Pirates of the Caribbean' themed wedding day. See SWNS story SWPIRATES: A groom thrilled his future wife by transforming into Jack Sparrow - for a Pirates of the Caribbean themed wedding. Eccentric Steve Holden, 57, has always been a big fan of the Hollywood blockbusters and had proposed to his partner Karen Ruffell, 52, while dressed as the outlandish pirate. On their first date she told him she would only ever marry Jack Sparrow, the character played by Johnny Depp, so after they got together Steve seized the opportunity to ask her while in full regalia on a pirate ship - in the Caribbean. And they then turned their local Holiday Inn into a pirate scene for the big day, and tied the knot in front of an expectant crowd of amateur pirates.

A groom thrilled his future wife by transforming into JACK SPARROW – for a Pirates of the Caribbean themed wedding.

Eccentric Steve Holden, 57, has always been a big fan of the Hollywood blockbusters and had proposed to his partner Karen Russell, 52, while dressed as the outlandish pirate. 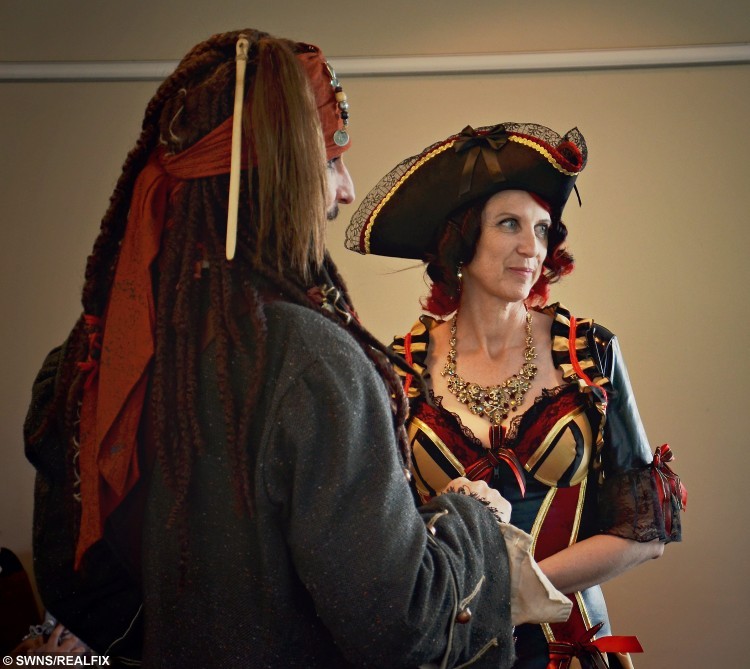 When they started dating, she told him she would only ever marry Jack Sparrow, the character played by Johnny Depp.

Three years later Steve seized the opportunity to ask her while in full regalia on a pirate ship – in the Caribbean.

And earlier this month they turned their local Holiday Inn into a spectacular pirate scene for the big day, and tied the knot in front of an expectant crowd of amateur pirates.

He pieced together an exact captain Jack Sparrow replica costume and decorated the hotel with human skull candle holders.

He had a friend specially make up some masts, and adorned one on each table.

Karen was dressed as a common wench, but stuck with the black, red and gold colour scheme of the wedding.

Steve said: “We even had a six foot cut out of Johnny Depp, and a local impersonator walking around chatting to the guests.

“I went dressed as Jack Sparrow as well. I had the outfit made for me and grew a beard and died my hair.

“I would say that I don’t have the features of Johnny Depp, but the look was close.”

“I was going around in the persona of him for ages to get it right, and people put up with me being quite a lemon.

“Karen was dressed as a wench, but it was all red black and gold, and her hair was dyed black and red, she looked absolutely stunning.

“It wasn’t your regular wedding; we took it away from that.

“We’ve both been married before, so we didn’t want to do the formal stuff.” 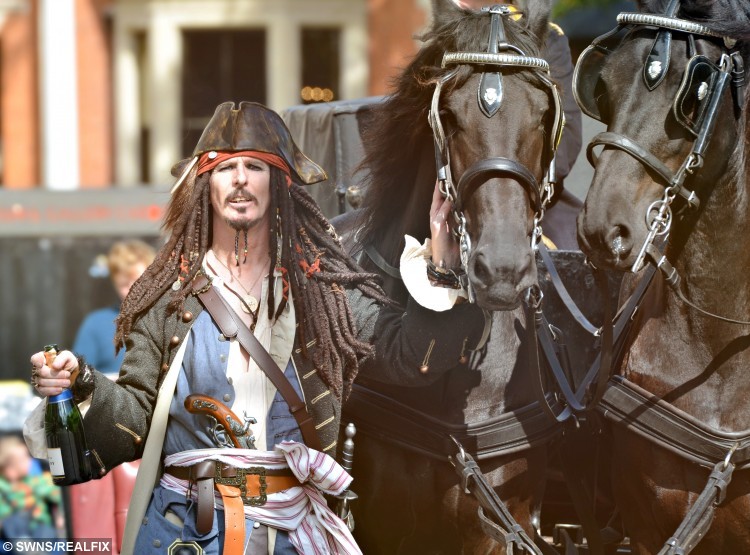 The couple first got together in December 2010 when they were both going through divorces, and lived on the same road in Cardiff, Wales.

They instantly struck up a rapport, and realised they had much in common, including their love of the Pirates of the Caribbean films.

At a party Karen told Steve that she would only agree to marry him if he dressed as a pirate, on a pirate ship in the Caribbean, and Steve decided to take up the challenge.

On a holiday to St Lucia in January 2014, Steve seized his chance and rented out a ship in the harbour before managing to distract Karen and rushing to change into his prepared pirate costume.

After a brief pause Karen accepted, and Steve was tasked with preparing the wedding – which he decided would only be fitting if it carried on with the wedding theme.

Steve, a customer service representative who has four children Michael, 26, Michelle, 32, Amelia, 8, and Amber, 6, from a previous marriage. He also has two grandchildren Chloe and Leah.

He said: “I love the films Pirates of the Caribbean.

“I went through a divorce myself, and I started chatting to a neighbour who lived down the road, I’d known her for 30 years.

“We got chatting and she was going for a bad time, and it came up that she also liked Pirates of the Caribbean, and I asked her out for a meal in the evening.

“At a party I said one day I would marry you, and she said no way, as I have terms and conditions, and one of them was that she would only marry Jack Sparrow.

“So I said I can sort that out, and she said it had to be in the Caribbean on a ship.”

“We went on holiday to St Lucia, and there was a ship in the harbour called the Black Magic. It was just like a pirate ship so I organised to hire it out.

“It was just me, the captain, and Karen, and she was looking around the ship. I asked them to take her away to the front of the ship and I went down to get changed into a cheap pirate outfit, and proposed to her there and then.

“From then on we were planning on going back to the Caribbean to get married, but we couldn’t afford it, so we brought it to Cardiff.

“It took so much coordination to get everything there and ready, but we didn’t want a normal wedding.

“I got skulls of different sizes and turned them into candles with molten wax, it took me ages.

“I got masts on each of the tables made by a friend, then I decorated them with the sails.”

“There was treasure, doubloons and all sorts to make it look authentic.

“There were old fashioned barrels stacked around, I had pirate chests made, with blacks and reds and gold. We also had fake ivy instead of flowers.

“I had a jar with a heart inside it, from one of the films.

“We just wanted a day when no one was bored.” 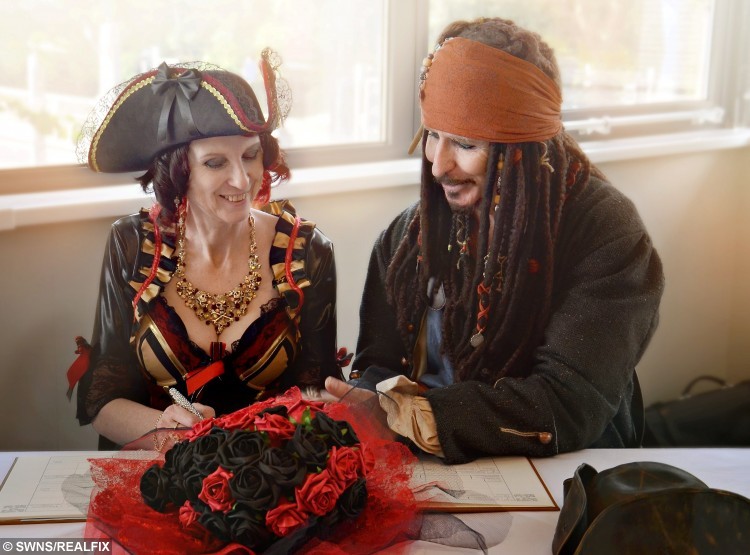 Steve said they returned to St Lucia for the honeymoon and went back on board the Black Magic.

He said: “They gave us a certificate to say we were married out at sea, in the Caribbean, so by the pirate code we are now man and wife.

“It was nice to fulfil the promise I made her that it would happen.”

Karen, also a customer service representative, has three children Liam, 31, Hayley, 34, and Michelle, 35, said: “I was in total shock, it started off as a joke – then three years after we got together he proposed dressed as a pirate.

“I had forgotten about the initial conversation, but it was a nice shock.

“The wedding was perfect. As soon as the Pirates of the Caribbean music came on as I walked down the aisle, everything was just like a dream.” 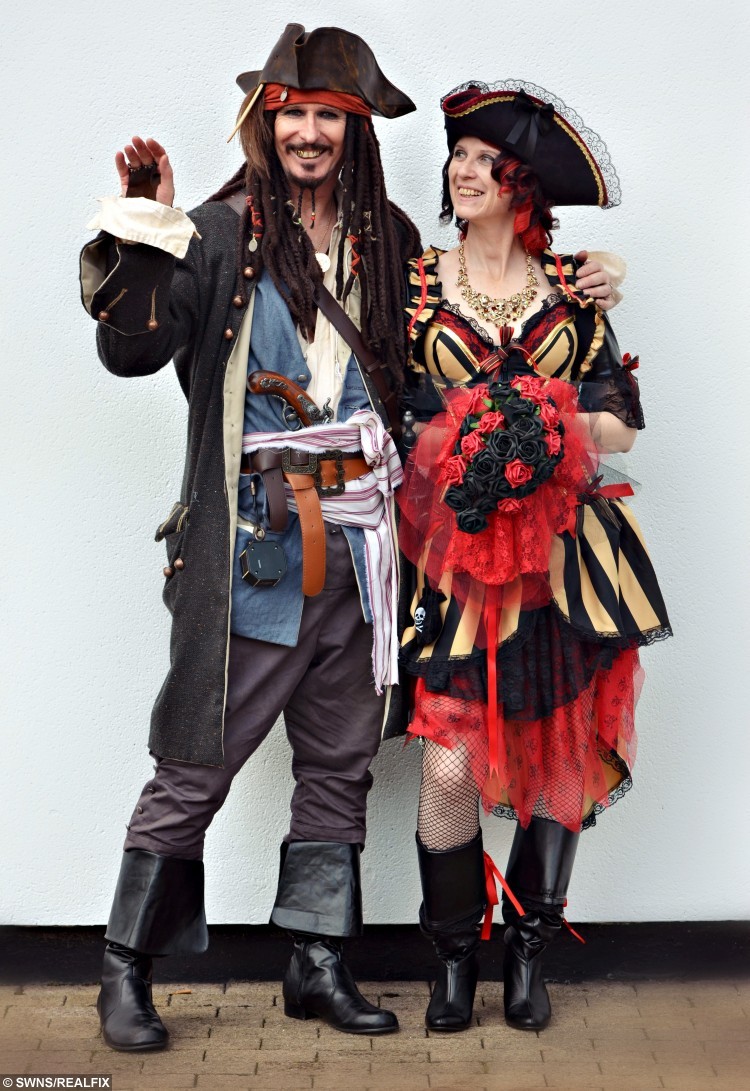 Fearless 90-year-old jumps out of a plane to fulfil lifelong ambition!