The shocking way this gran is unwittingly getting high on crack cocaine!

Suzanne Chilton, 69, who claims she has been getting high off the crack cocaine smoked by her neighbour. See SWNS story SWHIGH; A grandmother living in an elderly people's complex claims she has been getting high off crack cocaine fumes as she opened the window of her retirement home. Suzanne Chilton, 69, says she has been able to smell the fumes, coming from the flat next door, for almost a year. As a result she is often left feeling dizzy and breathless.

A granny is getting high on crack cocaine – because fumes from drug users are wafting into her flat.

Suzanne Chilton, 69, says her council block is over-run by junkies who are smoking drugs in neighbouring properties and communal corridors.

At first she thought the “funny smell” was cleaning chemicals until her street-wise daughter informed her it was actually crack cocaine and cannabis.

The retired personal assistant said the smell, which has been seeping through her doors and windows for almost a year, leaves her feeling “dizzy” and “light-headed”.

She was even HOSPITALISED on one occasion after feeling “completely breathless” when her flat became swamped by the pungent whiff.

The mum-of-one has now sealed all of her windows and doors with draught excluders but says it’s still not enough to stop the fumes entering her home.

Suzanne, from St Andrew’s, Bristol, said: “It’s got worse and worse over the course of the year.

“We now have to put up with this smell on a daily basis.”

“When it gets really heavy and there’s a lot of people there it comes under my door and through the windows, it happens most days.

“I’m starting to become quite ill because of it. I’m suffering, and I’ve told them this but they just carry on – it’s driving me to despair.

“It makes me feel unwell, it seeps under the door and makes my chest and my head funny.

“One evening I was doing the washing up and I had to go and sit down, my head was spinning and I was all dizzy and light-headed.”

Suzanne said the smell first started around 12 months ago when a large number of people arrived at her neighbours’ home. 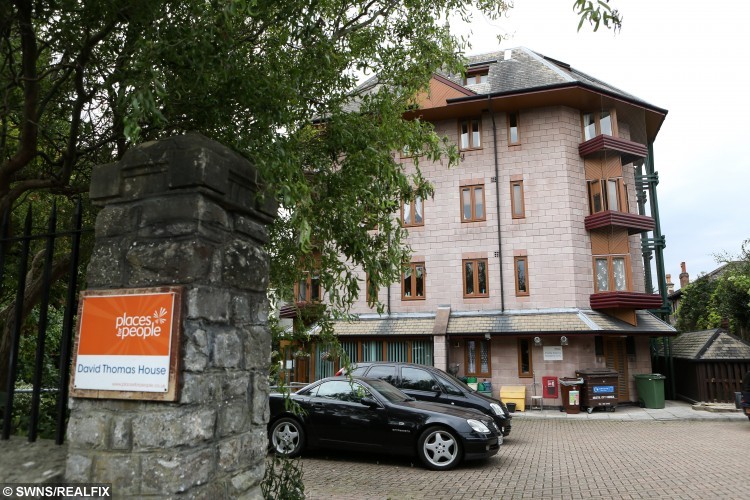 Though there are 29 flats in David Thomas House, Suzanne worries she is one of the worst affected, as fire doors prevent the smoke from leaving her floor.

She has attempted to stop the smell by buying draught excluders and plugging her windows, but she says it doesn’t work.

She added: “Some nights I start to become quite unwell, I’ve tried blocking up the doors and windows, but it doesn’t work and I should have to do that every night.

“Where are my rights? I have a right to be able to breathe surely. I had to go to A&E one night because I just couldn’t breathe.”

“It’s been a complete nightmare, it would be easier to live in hell. It’s been such a terrible year.”

Suzanne has now handed a petition to Places for People, who run the housing block, in a bid to bring in security guards to prevent the drug use.

She said: “I have been constantly complaining to the landlords for months now, but I just get ignored.

“I’ve written everything that has happened down, but nothing has come to anything. I feel like I am writing and complaining to myself.

“It would be easier living in hell than here at the moment. It just shows we are treating the elderly like we are nothing.”

A spokesperson for Places for People, which runs the block, said: “We’d like to reassure Mrs Chilton and other residents that we take all going at all times of the day and night.

“We take reports of this nature seriously and any behaviour which breaches our tenancy agreement is dealt with.

“We are working closely with the police, partner agencies and residents, and will continue to do everything in our power to ensure the wellbeing of residents.”

A spokesperson for Avon and Somerset police confirmed they were aware of the allegations made by Mrs Chilton.

He said: “We are aware of the issues reported in relation to drugs related anti-social behaviour at a property in St Andrew’s.

“We have been in contact with the housing association responsible for the property and the reports have been actioned appropriately.

“If you are experiencing ASB of any kind you can report it to us on 101, via our website or through Crimestoppers if you would prefer to give information anonymously.”