This GIANT pizza isn’t quite what it seems…

David Duncan with a three foot square cake made to look like a pizza on display at 3D-Cakes in Edinburgh.See Centre Press story CPPIZZA; These are the amazing pictures of a cake that is shaped like a pizza in giant take-away box. The 3.5 ft sq masterpiece was created by staff at the 3D Cake shop in Edinburgh in just one day and weighs more than 70 kilos. The giant pizza sits in a box made to look like a Dominos take-away and is situated in the shopÃs display window. David Duncan, 31, owner of 3D Cakes, said it was just one of many Ãdramatic and interestingÃ projects his team take on.

Hungry customers looking to chomp down on a slice of this giant pizza are in for a sweet surprise because it is actually a CAKE.

The 3.5-ft sq masterpiece was created by six staff in just one day and weighs an incredible 70kg.

It sits in a box made to look like a Domino’s Pizza takeaway and has been placed in the window display at Edinburgh’s 3D Cakes store.

David Duncan, 31, the shop’s owner, said it was just one of many “dramatic and interesting” projects his team take on.

He said: “We’ve done a giant pizza cake for our window display. Pretty much everyone that walks by stops to take a photo. They are all quite impressed.

“It just one of those things we do to bring attention to the more dramatic and exciting cakes.

“It’s a giant pizza box made of cake and we’ve created the pizza itself with icing on top. It took us a day to do it and there was six of us working on it.”

“It has peppers, jalapenos, mushrooms and salami all on the pizza. It’s all airbrushed detailed to make it look realistic, you can see it looks burnt round the edges.

“It’s a cake to look like a realistic pizza but a blown up version.”

“Just for the realistic look of it, we’ve done it in a Domino’s box, iced to look like Domino’s from the back.”

David, from Edinburgh, and his team recently made a six-tiered cake to celebrate the Queen becoming Britain’s longest serving monarch, decorated with a sparkling crown.

They even made a giant cake for Prince William two years ago so he could donate it to Yao Ming, a 7ft 6 Chinese basketball player.

David added: “We made a cake for Prince William at the end of 2013. We created a great giant rhino cake that was over four and a half foot long and we delivered it down to London.

“We’ve got a picture of it on our wall.

“He was donating it to Yao Ming for his birthday so there is a picture of the big basketball player next to the cake with Prince William.

“It was for all the work Yao Ming has done for the rhinos and his conservation work.

“We created a cake for the Queen as she was to become Britain’s longest serving monarch. And it was a six tier high cake with a union jack bow and sparkly crown top piece.”

3D Cakes have two shops in Edinburgh that create both wedding and novelty cakes.

They also have a cake school and shop in Glasgow and a supply store in Newcastle. 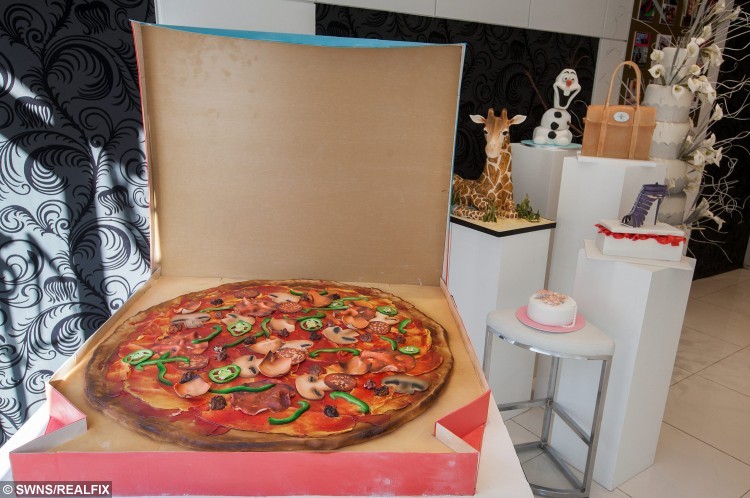 Backlash for police after rescuing 'newborn baby' from locked car