Fella the pig at his home in Soham, Cambs. Real life Babe Fella the pig was rescued from a slaughterhouse and now spends his days going for walks on a lead and he even BARKS along with the other family dogs. See swns story MNPIG. Emily Keates, 25, and her American partner Dustin Graziotti, 28, rescued crossbreed micropig Fella from a meat farm in Essex when he was just three months old. The vegan couple couldn't bear the thought of him being 'turned into sausages' and rescued him, taking the tiny piglet home wrapped in blankets. Next week the pig will celebrate his first birthday, but instead of rolling in mud he is much happier cuddled up on the sofa or going for a morning stroll.

Fella the pig is a real-life Babe – who goes for walks on a lead, answers commands to sit and wait and even tries to BARK like a dog.

The crossbreed was rescued from a slaughterhouse by owners Emily Keates and her partner Dustin Graziotti when he was just three months old.

The vegan couple couldn’t bear the thought of him being turned into sausages and took him home to live with their three small terrier dogs.

Fella has since celebrated his first birthday but instead of rolling in mud he is happiest cuddled up on the sofa or going for a morning stroll.

He gets on well with dogs Benny and Teddy but bullies new arrival Stanley by circling him and grunting, which is natural pig behaviour towards a newcomer.

Sales worker Emily, 25, from Soham, Cambs., said: “We’re head over heels in love with Fella, he’s so affectionate and precious.

“I’ll never forget the day we rescued him from the meat farm, it was quite haunting.

“All the pigs were squealing. It was as if they were crying out for help and we both knew we had to take Fella home with us.”

“The farmer said he would be turning him into sausages, the thought of which makes me feel sick and disgusted.”

Emily originally wanted a micro pig and was due to buy one from a breeder but she cancelled the deal.

She then contacted a meat farm and the farmer agreed she could visit and buy one of his piglets for £70.

The couple wanted a girl and the farmer put tiny Fella in her hand and they decided on her – only to find out he was a boy.

To keep the pig Emily had to get licence from DEFRA, as well as a movement licence.

This entitles her to take Fella out – but she must inform DEFRA if she goes more than five miles from her house.

Fella is now as big as a German Shepherd but still has another six months of growing to do and could be half as big again when he is fully grown.

He has a daily diet of boiled vegetables, bananas and a few odd scraps from the kitchen.

Emily said she always wanted to get a pig to show other people they are not just for food.

She added: “We just wanted to show people that they are just like dogs. They feel pain, they have emotions. Our plan was always to bring him up as a dog.

“It’s just like having another dog, but in fact Fella is easier and cleaner than the dogs.

“He sleeps with the terriers in our spare bedroom and is allowed to go everywhere in the house, apart from our bedroom.

“He’s fully toilet-trained so doesn’t make much mess at all.

Read here about the FOX that thinks it’s a DOG! 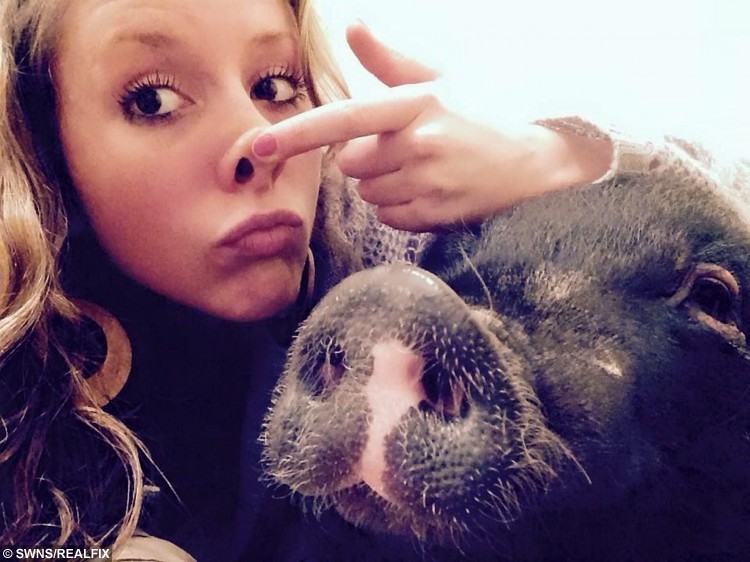