Residents were left terrified after hail stones "the size of golf balls" hammered down during a freak storm causing thousands of pounds worth of damage to properties.

Residents were left terrified after hail stones “the size of golf balls” hammered down during a freak storm causing thousands of pounds worth of damage to properties.

The extreme weather event battered cars and homes in Daventry, Northants, leaving one resident with more than £5,000 worth of damage to his Audi cars.

Shocking video footage shows huge hail stones raining down in a garden causing a deafening sound at a house in the Lang Farm area of the East Midlands town.

Edward George, 31, captured the drama in his conservatory, and said one of his Audis was left with £3,000 worth of damage and more than 200 dents to the bodywork.

He said the hail also punched holes through his garden furniture and dented neighbours’ cars along his street.

Mr George, who lives with his wife Radka and their two-month-old son, said he had never seen hail stones this big.

The engineer said: “My outdoor furniture has had holes punched through it. Every person’s car parked outside has been dented.

“It was never strong enough to smash a windscreen but enough for a golf ball effect.

“It was torrential rainfall – then all of a sudden it went to heavy hail. It all happened so quickly.

“I ran into the conservatory to take the video. As soon as I sent it to my friend he asked ‘what about the cars?’.

“They’re the biggest hailstones I have seen.”

Damage to residents’ cars will be covered by insurance companies – but will cut their no claims bonuses. 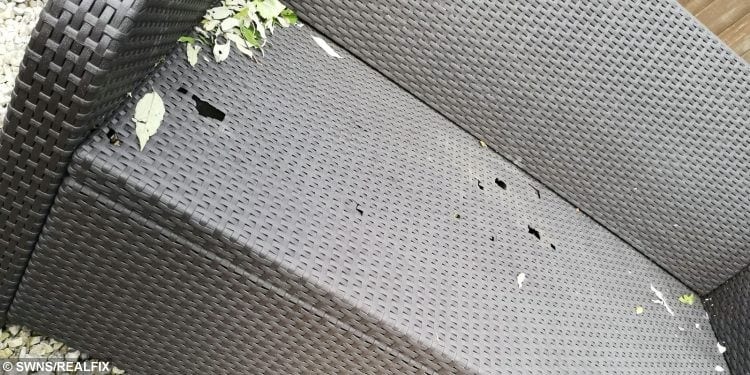 Another neighbour, who did not want to be named, added: “It was pretty scary, it sounded like the roof was going to come in.

“They were about the size of golf balls and did a right number on my car. Its going to cost a fortune to get the bodywork fixed.

“You see these sort of things in Australia and places like that – but never here in Britain.”

The Tornado and Storm Research Organisation (TORRO) – a privately supported research body – is investigating the storm and will present findings at its annual autumn conference in October at Oxford Brookes University.

TORRO Thunderstorm Division director Jonathan Webb said: “Large hailstones and a funnel cloud have been reported in the Daventry area.

“We will welcome any accounts of the hailstorm and photographs of the hailstones (with location and time), including damage, as these will be invaluable to our investigation.

“Any information on strong local winds or lightning damage will likewise be of great help with our research. ”

Footage Shows Workman Biting The Head Off A Live PIGEON