by RealFix
in Animals, Bizarre, Cute
0

A young farmer is hoping to pay her way through veterinary school by breeding – the world’s cutest LAMBS.

Vicky Wise fell in love with rare Valais Blacknose sheep – famed for their black faces and feet and fluffy white coats – that she bought six of her own. 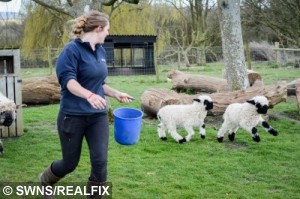 Now the 24-year-old is caring round the clock for her ram, ewe and four little lambs in a bid to fund her dream trip to study at the Royal Veterinary College from September.

Vicky, from Eastbourne, East Sussex, said: “They are just so cute – I fell in love with them the first time I saw a picture of them online and had to have some myself.

“I’m hoping that I’ll be able to breed them and produce enough lambs to pay my way through vet school.

“Valais Blacknose are in huge demand at the moment by people wanting farmyard pets – like alpacas, llamas and micropigs.”

Vicky cares for her mini flock at Middle Farm near Firle, East Sussex, since she got them from a breeder in Cornwall two weeks ago.

Ram Cedric, one, is said to be the “softest boy in the world” according to Vicky, who hopes he will be man enough to produce enough babies for her woolly enterprise.

She also has ewe Petra, four, and four girl lambs Liquorice and Bodmin, both five months old, and six-week-old sisters Uschi and Minka.

Vicky said: “The boy, Cedric, is absolutely gorgeous. You think rams could be dangerous but he is a complete gentle giant.

“I think they can probably take the title of world’s cutest sheep – but mine are a little rough round the edges as they live outside.

“I don’t have a favourite though – I love them all equally.

“Minke is so bold and feisty, while Bodmin likes the sound of her own voice and is always bleating.”

Animal-mad Vicky has worked at the farm for the last six years, and has previously been employed as a racehorse groomer, in kennels, a cattery, and in riding stables.