Pictured (R-L) Bob Parks know as Bonny Parks and Herbie Bright meet for the first time in 40 years. They were best mates, brothers-in-arms Ã but after losing touch for 40 years, they never realised they were living just three miles from each other. See MASONS story MNHEROES. And there were tears, and then beaming smiles, as ex-soldiers Bonny Parks and Herbie Bright, both now pushing 90, met up once more. In an amazing turn of fate, the Second World War veterans have been reunited four decades on, thanks to a fundraising dinner taking place in Cambridge next week. The Poppy Dinner, held at Queens' College next Wednesday, is in honour of the Royal Anglian Regiment, and is being organised by city businesswoman Vanessa Burkitt.

Two war heroes who lost touch with each for 40 years have finally been reunited – after discovering they were living just three miles apart.

Ex-soldiers Bonny Parks and Herbie Bright, both now pushing 90, fought alongside each other during some of the fiercest fighting of the Second World War.

The pair remained best friends after the war but lost contact in the 1970s.

Now in amazing twist of fate, they have had an emotional reunion thanks to organisers of a fundraising dinner for war veterans being held at Queen’s College, Cambridge, next week.

The Poppy Dinner is in honour of the Royal Anglian Regiment, and is being organised by city businesswoman Vanessa Burkitt.

She decided that every ticket sold would include a free seat for a soldier, and about 40 will be going along.

One of them is former Royal Anglian 24-year-old Tom Parks, and his father Robert, 61, who got in touch with Vanessa and asked if HIS father, Tom’s grandad, Bonny, could come too.

Vanessa said: “Of course we said yes. That’s what the dinner is all about.”

Robert said: “My dad said the chance to go to the dinner had stirred his memories of the war, and his great friend Herbie, who he hadn’t seen for 40 years.”

“This prompted my mum to look in the phone book on the off chance that there might be relatives in Cambridge who might know what had happened to Herbie.

“Dialling a number for an H Bright, we were amazed to find it was Herbie himself.”

The old pals met each other again on Thursday ahead of the dinner, and have agreed to meet up once ever two weeks, either at their homes, or a local pub.

In 1944, in the wake of the Normandy landings, they fought side by side, seeing action in Belgium, the Battle for the Rhine, and the push through Germany.

When the war ended, they remained in the Army for a few more years, serving in Palestine.

Herbie, 89, said: “I was originally from Shropshire and Bonny was from the Cambridge area, and at first we managed to stay in contact.

“Later I moved to this area, and often wondered about whether I might see Bonny again.

“I just never imagined we were living so close to each other.”

“It’s great that we’re still going strong, and it is lovely to see him again.

“We went through alot together.

“Wild horses won’t keep me away from the Poppy Dinner – because it’s brought us together again.”

Mark Poynton, chef patron of the Michelin-star restaurant, Alimentum, has created a special menu for the dinner, and other guests will include Cambridge’s Mayor Robert Dryden, Lord Walker of Aldringham, former Chief of the Defence Staff, and the Earl and Countess of St Andrews. 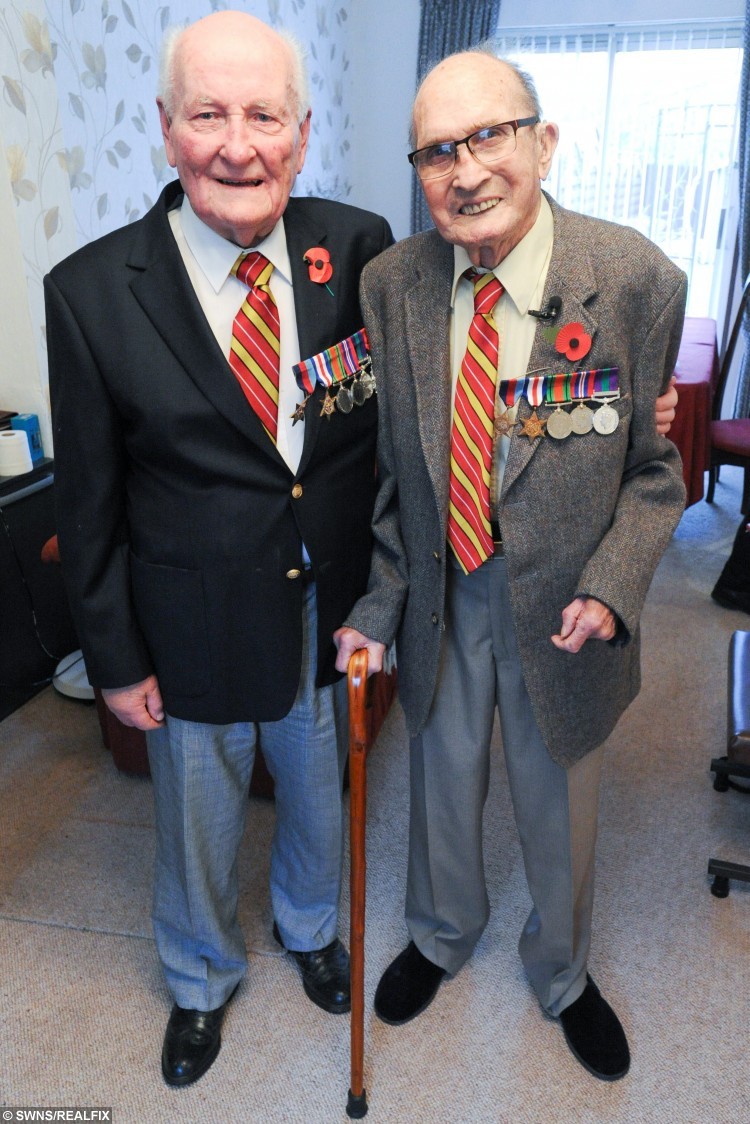