Father and daughter pole dancing team Dave and Hazel Roberts. See SWNS story SWPOLE: The world’s first father-daughter pole-dancing duo has made it to the final of a national competition. Dave and Hazel Roberts, of Gorse Hill, will take to the pole at the UK doubles championships in Birmingham on October 4. The national recognition marks the pinnacle of their pole-dancing journey, which got under way after a coincidence three years ago. The 50-year-old B&Q team leader discovered a talent for swinging round the pole when he accompanied a former girlfriend to Emily’s Pole Fitness in Cheney Manor. “I just kept going and I enjoyed mastering new moves and the strength I was building up. It was difficult at first because I was the only man, I’ve gone from 15 stone to 11 stone and I feel so much better in myself,” Dave said.

The world’s first father and daughter pole dancing duo have taken the dancing world by storm and have made it through to the national doubles finals.

Superfit Hazel Roberts, 24, and 50-year-old Dave both took up the hobby around three years ago without knowing the other was taking part in the unconventional exercise.

But once they realised they shared a love for pole dancing and decided to perform together – a decision they say has brought them closer together. 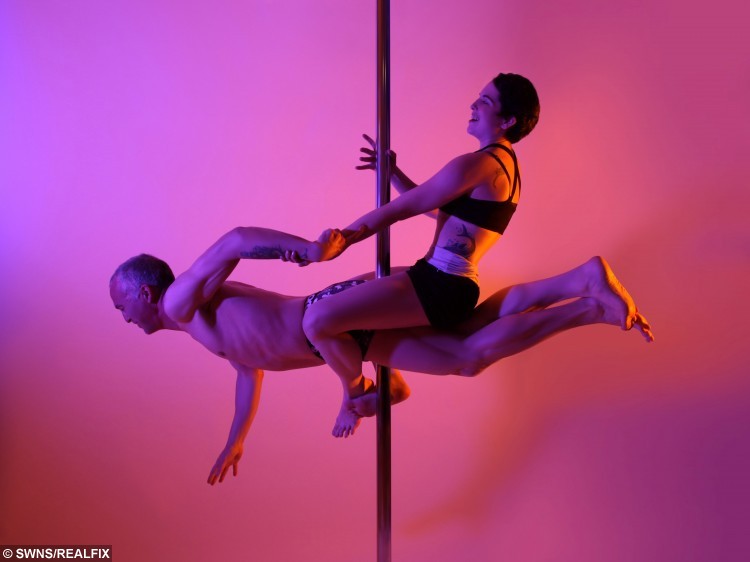 The pair dance on single poles, as well as taking part in doubles competitions, where they perform routines together on one pole.

They recently scooped first prize at a national championship and are set to hit the stage together again at the UK doubles championships.

Father-of-five Dave admitted he was initially worried dancing with his daughter would be “odd” the partnership was working well.

He explained: “We’re a close family anyway so it wasn’t difficult to get that close, you have to trust your partner and we do.

“At first I wondered myself if it was a bit odd because pole-dancing has this perception but there’s nothing like that at all in our routines.

“It’s a real strength exercise and we’re working together and we’re having fun too, that’s what’s important.” 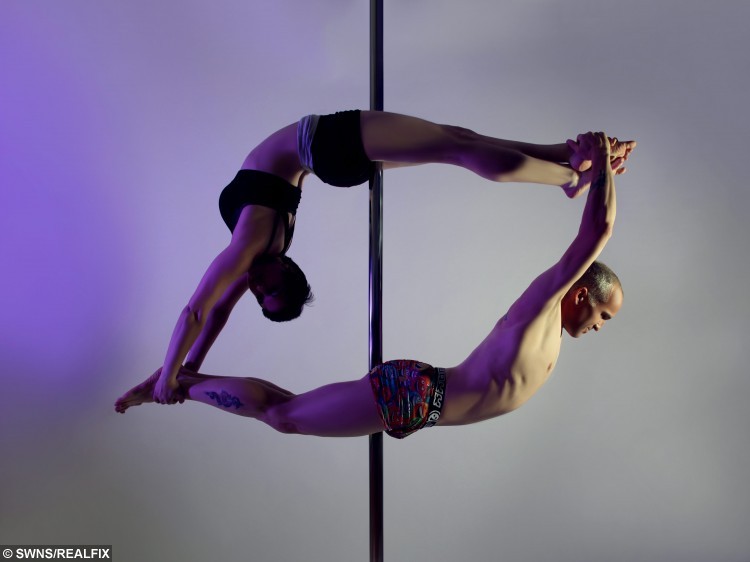 Hazel added: “I really enjoy performing with dad. If you’re going to trust anyone not to drop you it’s your dad.

“I’ve always been a daddy’s girl but this has definitely brought us closer together. Lots of people think it’s unusual or weird, but it’s not at all. It’s just good fun.”

Dave, a B&Q team leader, started pole dancing more than three years ago after he and his then-girlfriend were inspired by Bendy Kate on the TV show Got to Dance.

Shortly after, Hazel, who was studying marine biology in Ireland, took up lessons with her friends as it was becoming increasingly popular.

When Hazel, who works at Morrisons, returned home and found out her father had been attending classes they decided to partner up.

The pair have installed two poles in their home in Swindon, Wiltshire, and cram in practice together around their shift patterns. 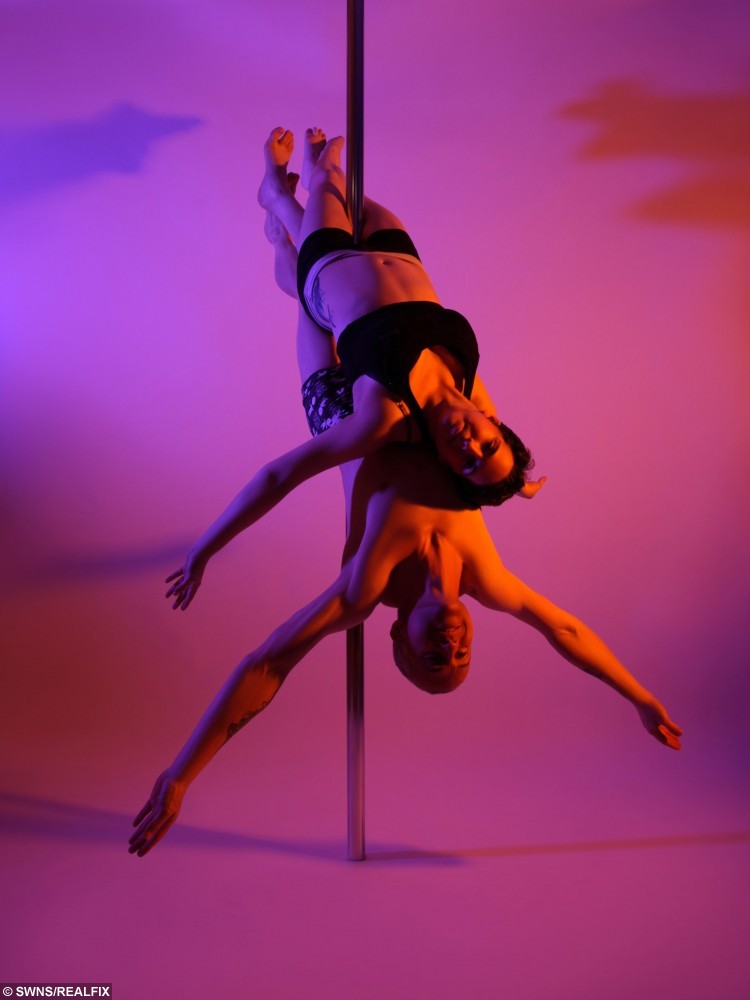 Dave added: “I think she was a bit shocked and surprised at first when I told her I was doing it but then she started going as well when she moved back to Swindon.

“I know I can’t drop her because her mum would kill me.

“I do get anxious when she flips off the pole and I hold my breath but we give each other discreet signals and it’s always been okay.” 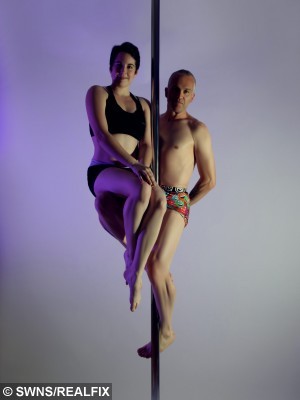 The duo take part in as many competitions as they can and recently scooped first prize at the Heir to the Chrome Awards doubles category held in Milton Keynes on July 4.

The pair’s Frankenstein-themed routine, which saw Hazel pulling Dave out of a body bag and later somersaulting off him, won them the coveted award.

Although neither of them were particularly confident dancers at the start of their venture, they received help from Donna Gant, who helps choreograph their routines.

Dave added: “We’re getting better, we’re gaining confidence and you might even see me somersaulting in the next one.

“At first, we thought we were the only father-daughter duo in the UK but reaching out into the pole dancing community we can see we are the only pair in the world.

“I don’t care what people think. I’m fit at 50, I’ve discovered muscles I never knew I had and I’m having fun. More dads should take it up.”

Dave and Hazel will take to the pole at the UK doubles championships in Birmingham on October 4. 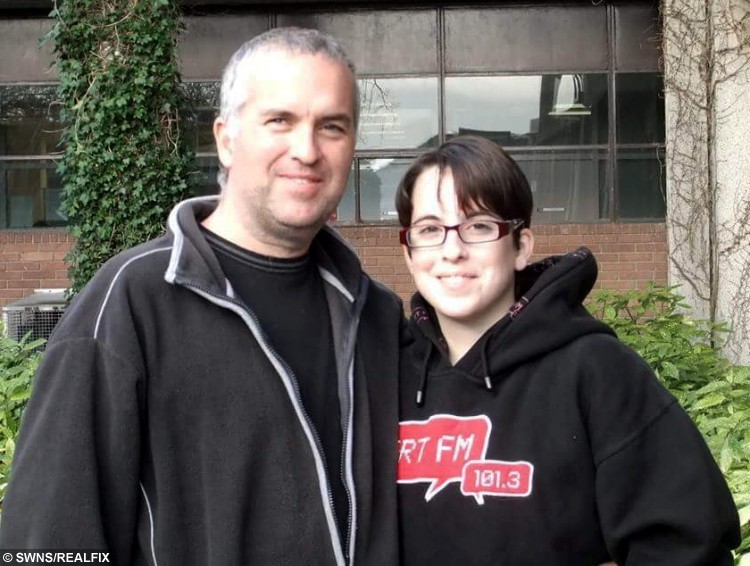 Still not worried about Giant Hogweed? You will be after this