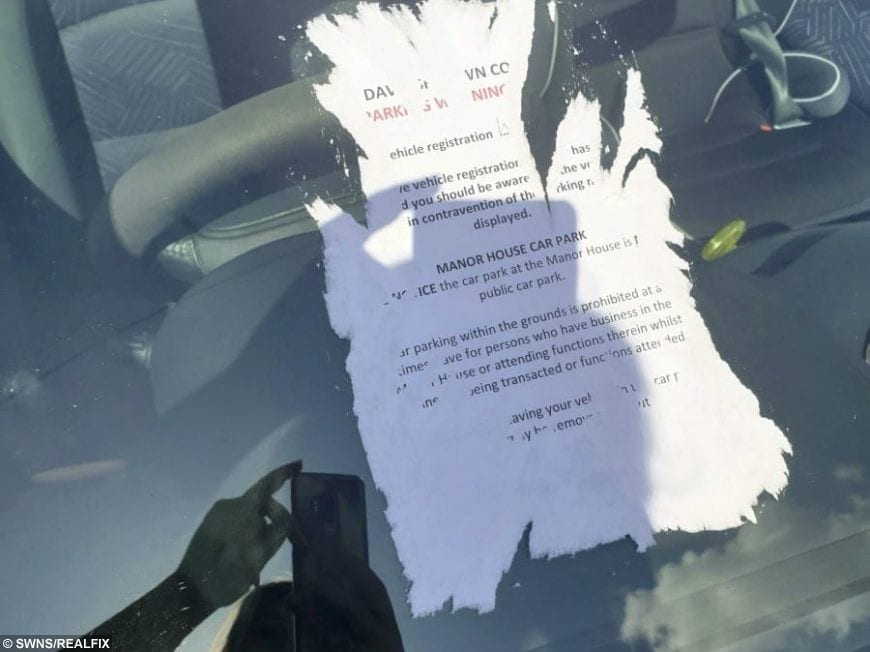 A woman was left fuming when she discovered her local council had GLUED a parking warning onto her car windscreen.

At around 10.30am the next day, Danielle returned to the Georgian wedding venue – only to find a parking notice stuck to her windscreen with strong glue.

When the part-time cleaner first tried to remove the notice, the paper ripped and left a thick layer of dried on the driver’s side.

Furious Danielle stormed into the Manor House, owned by Dawlish Town Council, and demanded to find the person responsible.

She claimed, though, that a member of staff tried to block her car by parking behind it, saying “he was going it to prove a point that my car shouldn’t be parked there”.

Danielle added: “So it was basically out of spite.”

Danielle had cleaning materials to hand and managed to scrub off some of the dried glue with an ice scraper – though some remains.

She said that she “understandably lost my temper when they told me it [gluing the notice] was to prove a point”.

Danielle said: “It’s totally unacceptable to do that to someone’s vehicle just ‘to prove a point’ rather than at least just putting the notice under my windscreen wiper.”

In a fit of rage, she contacted the police, who told her the glued notice couldn’t be classed as criminal damage because the windscreen hadn’t cracked.

Motorists such as Danielle who are not using the venue are banned from using the Manor House’s car park – something she freely admits.

But she claimed that she couldn’t find parking spaces in the area without stopping on double yellow lines, and figured “many other residents” use its car park.

Danielle explained: “I never use the car park when there is a function going on or clearly quite busy. It is only when I can’t find a space anywhere else close by, as we as residents have huge difficulty finding parking around there.

“I had driven around looking and when couldn’t find one and as it was around 6pm decided that it would be okay to put it there just overnight.

“I knew the gates would be getting shut at around 7pm.

“I’m aware if I didn’t park there it wouldn’t have happened, but my point is how they dealt with it by damaging my windscreen and the utter spiteful actions of them.”

Though Dawlish Town Council ruled in 2013 that the Manor House car park was only to be used by guests, many resident defy this verdict and park there.

A spokesperson for Dawlish Town Council confirmed that a “washable water-based adhesive was used to affix a notice to a car”.

They also claimed that Danielle’s car was not blocked in out of spite, but because “there was a shortage of spaces due to bookings in the building”.

They said Danielle asked “for the vehicle to be moved and requesting to know who had posted the notice to their windscreen”.

The spokesperson added: “The vehicle owner acknowledged they should not have been parked in the car park but stated they had done so on numerous occasions.

“When the member of staff moved their car as requested, the person used expletive language to verbally berate staff.

“At this point staff declined to engage with the person any further.”

Devon and Cornwall police said: “An officer will attend to speak to whoever stuck the notice on the car to refrain from doing so in the future.”