Would you tie the knot in the buff? Check out this big fat NAKED wedding!

A couple got married in what is thought to be Britain’s first naked Pagan wedding – in the middle of a rain-soaked wood.

Naturists John and Helen Donson stripped off to tie the knot in front of dozens of like-minded naked friends.

The ‘handfasting’ ceremony – a Pagan wedding – took place in their heart of their ‘spiritual wood’ at the Pines Naturist Club in the Forest of Dean, Glos.

Airbus worker John and Helen met three years ago at the funeral of Helen’s former partner – and John admits it was love at first sight.

He said the domestic cleaner opened his eyes to an entirely different world when she introduced him to naturism.

John, 61, who work for aviation manufacturers Airbus, said: “As soon as I saw her I knew there was something special there.

“She brought me here and I was quite apprehensive about it, but I quickly got used to taking my clothes off and now I love it.”

Helen, 48, said: “As a girl my mum would try to get me to put my clothes on but I always used to run around naked.

“I hate clothes. I only wear them as a necessity but can’t wait to get out of them.”

They were then tasked with working together to free themselves of the bind without untying the knot – a symbol that they can work through difficult times together.

The pair, from Chippenham, Wilts., completed their nuptials by declaring ‘I love you’ in Norwegian.

But they will have to wait, and put clothes on, before they are legally wed because Pagan weddings are not recognised under UK law.

The ceremony was conducted by Pagan priest David Abel and priestess Melanie Sopp who were fully clothed. 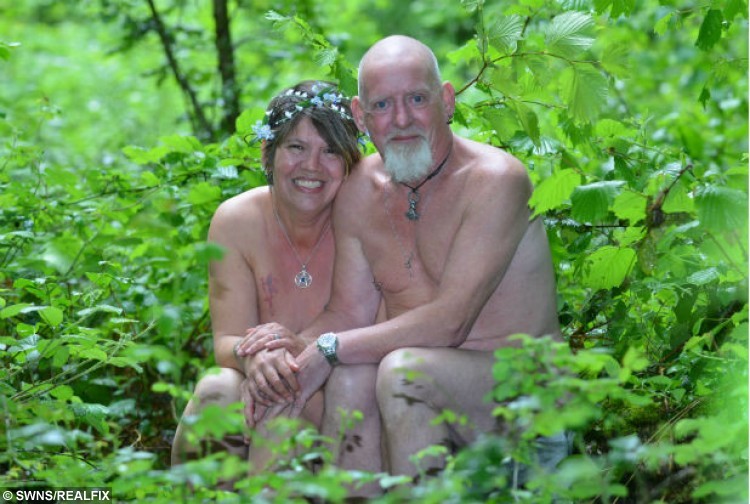 David, a former Methodist minister, said: “I was quite uncomfortable with the thought of conducting a naked ceremony when I was first asked.

“I thought to myself that my Methodist congregation would have been horrified at the thought of it.

“But I went along with it and it has been liberating.”

Handfasting is a Pagan tradition that dates back at least 4,500 years.

Barking mad! These two dogs will be together fur-ever after getting hitched

Barking mad! These two dogs will be together fur-ever after getting hitched