You’ll definitely want this to happen next time you’re stuck in a traffic jam!

The unusual moment that the stranded motorist ont he M5 in Devon were entertained by a string quartet. See SWNS story SWQUARTET: Motorists left stranded on a motorway were treated to an impromptu roadside concert - by a STRING QUARTET. The M5 was closed after several animals became agitated after a vehicle pulling a horse box broke down. But with traffic brought to a standstill a talented quartet got out of their cars, set up their instruments and delighted travellers with their beautiful music. Footage of the roadside concert was filmed by Helen Delingpole, 45, of Ferndale, Wales, who wrote: "A horse escaped on the M5 today on our way back from Devon, causing a complete stand-still and a string quartet to play."

Drivers stranded in a motorway jam were treated to an impromptu roadside concert – by a STRING QUARTET.

The M5 was closed in both directions after a horse box broke down and the animals inside became agitated.

So a talented group of musicians who were travelling home from a performance decided to pass the time by staging a gig in the outside lane.

They set up their instruments and amazed their fellow motorists by performing one of the world’s best-known pieces of classical music, Pachelbel’s Canon.

Footage of the roadside concert was filmed by Helen Delingpole, 45, of Ferndale, Wales, who wrote: “A horse escaped on the M5 today on our way back from Devon, causing a complete stand-still and a string quartet to play.”

The band, who were on their way back from a wedding in Devon on Sunday, have been stunned by the reaction to their performance between junctions 26 and 27 on the Somerset / Devon border near Taunton.

Alison Gillies, 37, of Bristol, who plays the cello in the band, said: “We were on our way back from playing at someone’s wedding and we got caught up in the traffic jam, then one of the quartet jokingly suggested it and we thought why not? 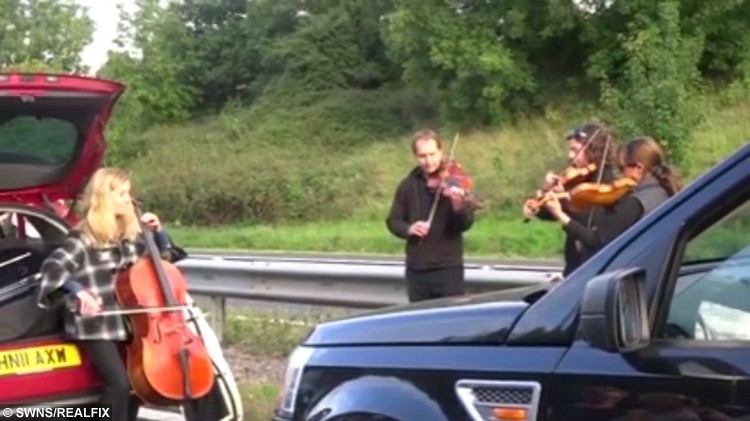 “A crowd of people came over, and everyone seemed to like it, it was great.

“People seemed to just come over, they saw us unpacking and everything so it wasn’t much of a surprise for them, but they got into it it was really nice.

“We were playing so we didn’t really notice at the time, but there was quite a crowd. We got a round of applause at the end and a woman came over and gave us some sweets.

“It was the more unforgettable gig of the weekend.”

Alison said that traffic was at a standstill northbound for around half an hour and they played just one number – Canon in D Major by Johann Pachelbel.

The band are not a regular quartet and had been put together for the wedding.

Another member of the group, Lu Jeffery, 31, of Portishead near Bristol, said: “It was a lovely moment, one the quartet will treasure.

“Between us we have played some of the most incredible concert venues globally and the one afternoon you play the M5 it all goes crazy.” 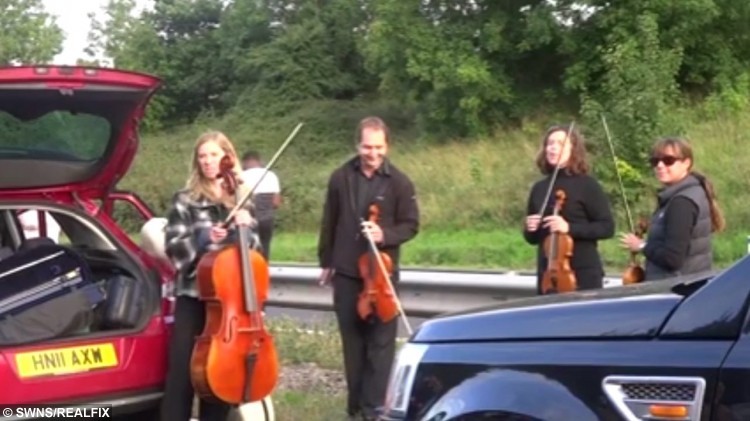 Highways Agency officials and a vet were all called to deal with the situation yesterday.

The horse transporter stopped at the hard shoulder, but the horses inside became agitated and tried to escape while traffic roared past.

A Highways Agency spokesman said: “We’ve temporarily halted traffic in both directions while we assist with a broken down vehicle transporting horses.

“Expect delays both ways. There are agitated animals at risk of escaping from their transport – traffic stopped, vet on scene.”