A vile PURPLE attack when a scorned ex-lover saw RED

They quickly became a couple and ex-soldier Daryl all but moved into Kerry’s house. But when Daryl moved gyms, saying he didn’t like his regular one any more he became suspicious that Kerry wanted to stay.

He begged her to leave, saying he didn’t like the men there staring at her and he believed she was flirting back,

When he called her a slut for wearing ‘skimpy’ yoga pants she thought it better to just quit the gym altogether. It was the first sign of Daryl’s jealousy. But not the last.

As soon as he’d finished work, he’d arrive at her workplace, and wait with her until she finished, sometimes until late into the night.

He’d search through her phone and accuse her of sleeping with any men whose posts she had ‘liked’.

His paranoia went so far that even if he went to the garage to get cigarettes, she had to go with him.

If he went away on business, he would Facetime her and make her show him around the flat they shared to prove she was alone.

One day she woke up to his boot over her head.

She curled up in a ball and Daryl just laughed and said, ‘You silly slag. You’re not worth it’.

Daryl even blackmailed Kerry into getting engaged, telling her, ‘If you don’t, I might kill myself’.

When Kerry finally plucked up the courage to leave him, during a row, she threw the ring in the bin.

Before he let her go, Daryl forced her to search through the bin and find it, threatening to glass her in the face if she didn’t. 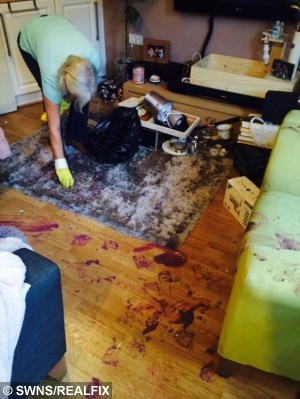 Terrified, Kerry ran straight to her mum’s house, where she called the police.

The police issued a harassment order and directed Daryl to come to the station to sign it. Daryl pleaded with her to retract it, but she refused.

On a night out with friends, a few days later, Kerry had seen messages online that Daryl was out, and that he was drunk.

The police told her he still hadn’t signed it.

Too scared to return home in case he was there waiting for her, preparing for world war three, she stayed with friends.

In the morning she woke up to messages on her phone asking her if she’d been home, if she’d seen her house.

Then she had a call from a neighbour saying her home had been vandalised.

She rang her mum and the police and was taken to her home. 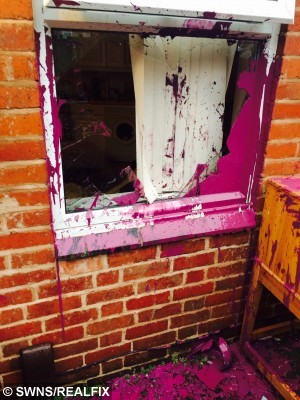 When she got there she couldn’t believe the damage.

The front of her house was covered in bright purple paint. Her window was broken and someone had trod paint around her home after breaking in.

There was paint all over the living room floor, a towel, the chair, all up the stairs and on her chest of drawers and curtains.

Kerry was devastated that not only had someone broken in, but that they had vandalised her home too.

“Where’ve you been? Shagging every bloke in Nuneaton?”

Kerry handed the phone to the officer who told him stay where he was and the police went and arrested him.