​A brave mum managed to fight off four knife-wielding thugs who forced their way into her home and threatened to stab her daughter – using only a pink toy car.

The men barged into Tina Foster’s family home demanding “money, gold and valuables”, put her son in a headlock and threatened her 17-year-old daughter at knifepoint.

But mum Tina was having none of it and started battering the attackers with the thing closest to hand – a large toy plastic car.

The 46-year-old, from Canterbury, Kent, was upstairs decorating one of her daughter’s bedrooms on 8 August when she heard the commotion.

Her 19-year-old son Mason and daughter Lara Footman had been confronted by two of the men as they were cooking lasagne.

The mum-of-six said: “One of them put my son in a headlock and a fellow who was over 6ft grabbed a knife from the worktop and pushed my daughter to the ground.

“He was saying he was going to stab her.

“I heard a load of shouting from downstairs.

“As I was walking down the stairs, I saw two other men in my hallway.

“I picked up my daughter’s toy car and hit one of them over the head with it and the two of them ran back out the door. I don’t know what made me do it.”

Tina tried to hold the door closed to keep them out, but they tried to force their way back in. 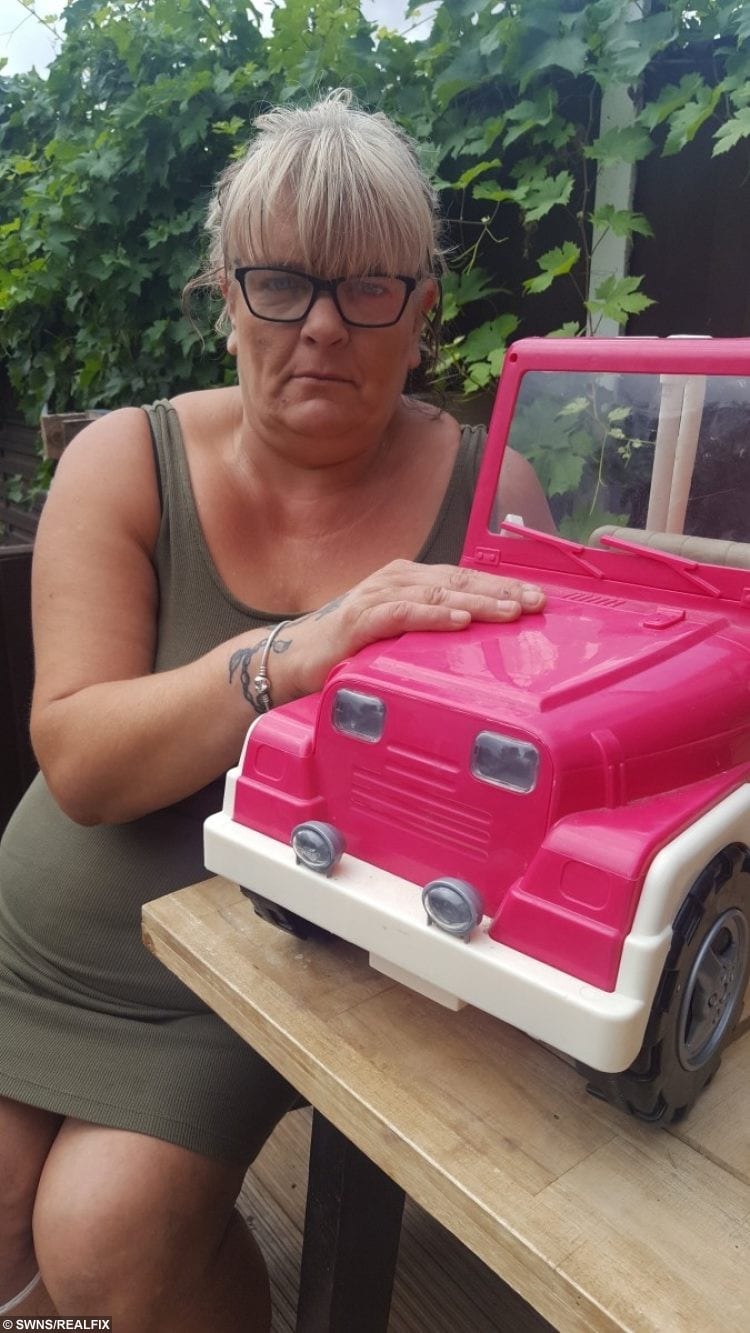 She said: “They were kicking and punching it trying to get back in.

“I hadn’t realised there were two more in my kitchen. But they soon pushed past me and ran up the road.

“My son managed to get out of the headlock and I think I must have disturbed them when I came down the stairs.

“I reckon it would have been a lot worse if I wasn’t there.”

Tina immediately called the police after the 15-minute ordeal. She says she and her daughter were both crying afterwards, while her son was in shock.

Her eight-year-old daughter was in the living room at the time, but did not see what happened.

While the intruders left the house empty-handed, the frightening ordeal continues to haunt the family.

The following day, Tina bought CCTV cameras as she fears the group might come back.

She added: “That’s the only way I’ll feel safe in my own home with my children.

“It was really scary.

“My children are still having flashbacks. My daughter is scared and doesn’t want to be in the house on her own now.

“I’m still in shock – I keep thinking about it. We’ve lived here for seven years and have never experienced anything like this.”

The men were seen driving off towards Russet Road in a green metallic 4×4.

One of them was tall with brown hair and was wearing a white t-shirt. Another was of medium height and large build, and wearing black round glasses.

The third was 5ft 5ins, with ginger hair and wearing a red t-shirt which he used to cover his mouth.

The family were unable to describe the fourth man.

Before the men entered, Tina had been keeping her front door propped open with a stairgate to allow a draught to run through her house.

She said: “I never normally have my door unlocked for anything.

“It was awful to be in that situation. I don’t know why we were targeted.”