‘Cold-blooded’ carjacker mows down granddad leaving him for dead

FILE PICTURE - Linked to todays NTI story NTITHUG, December 4, 2015, about the sentencing of Andrew Jones who left Reg Stocking with horific injuries following a carjacking FILE PICTURE - Reginald Stocking pictured in hospital recovering from a carjacking. A man has been found guilty of a car-jacking attack which left a 78-year-old man wheelchair bound, a court heard. See NTI story NTICARJACK. Andrew Jones, 34, was convicted of grievous bodily harm and robbery after he left Reg Stocking lying in a pool of blood in West Bromwich. A jury at Wolverhampton Crown Court also found him guilty of a burglary using Mr Stocking's car as a getaway. Jones, of Sandwell, West Midlands was remanded into custody to await sentencing on 4 December. He was also found guilty of witness intimidation. Mr Stocking's blue Peugeot 207 was taken outside his home in Chapel Street, West Bromwich. Jones hid before jumping into the car while Mr Stocking opened his driveway gate, said West Midlands Police. Mr Stocking tried to stop the Jones but he was hit and dragged by the car which left him in a critical condition with serious head injuries. Jones used the car as a getaway vehicle to steal a TV from a property in Groveland Road, Tipton just hours later. He stored the TV at his ex-partner's flat in Kendrick House saying "ask no questions and I will tell no lies".

A “cold-blooded” carjacker who left a have-a-go-hero granddad with horrific injuries after he mowed him down and left him for dead outside his home has been jailed for 14 years.

A court heard career criminal Andrew Jones, 34, lay in wait as the pensioner returned home in his Peugeot 207 at 9.20pm on May 10.

The retired security guard had dropped his wife-of-63-years, Sylvia, 81, off at their home in West Bromwich, West Mids., following a night at the bingo.

But as he was opening the gate to their driveway at the side of the property Jones jumped into the car which had been left with its engine running. 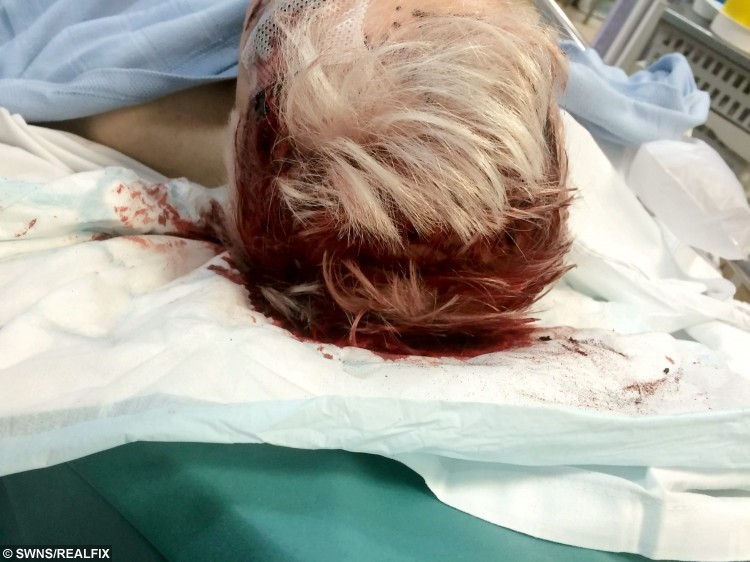 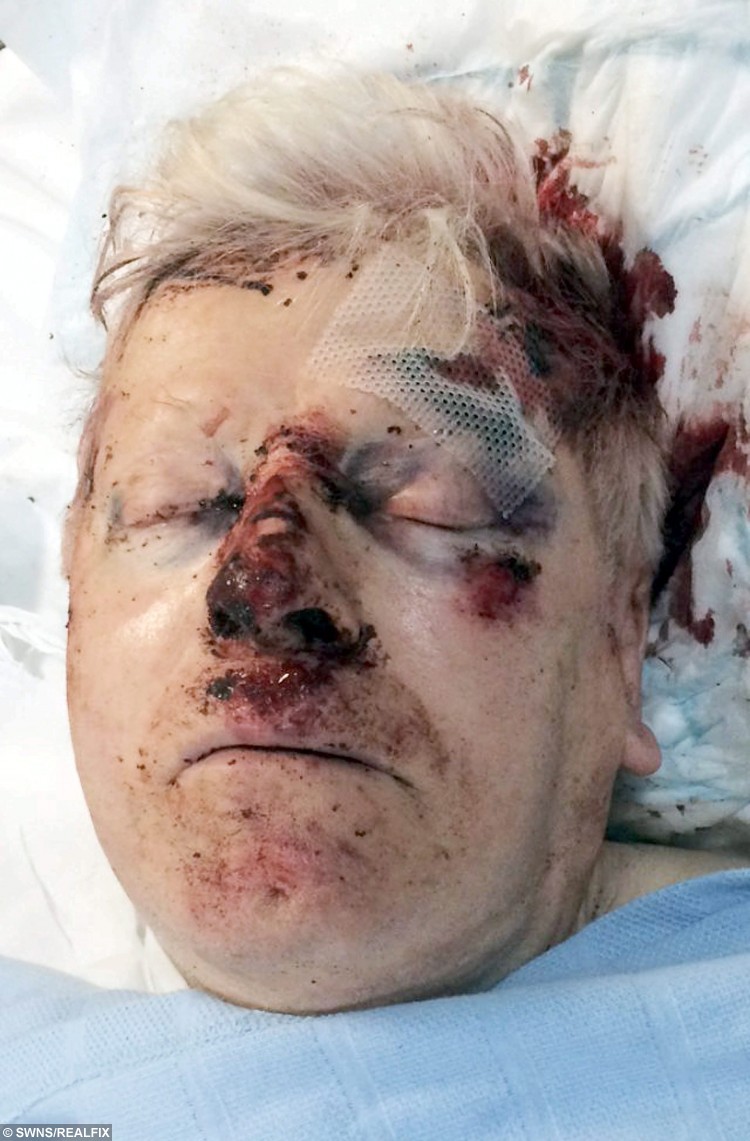 Brave Mr Stocking defiantly fought back but ended up banging his head on the door before falling underneath his vehicle.

Instead of stopping to help, the callous thug sped off causing the granddad-of-three to be dragged under the car before leaving him lying in a pool of his own blood.

Jones then used the vehicle as a getaway vehicle for a burglary where he stole a television from a house in Tipton, West Mids., just hours later.

Meanwhile, Mr Stocking was rushed to Sandwell General Hospital where he was treated for “life changing” injuries.

Police managed to track Jones down after studying CCTV footage which showed him walking along the street near to Mr Stocking’s home.

He was found guilty of robbery, causing grievous bodily harm with intent, burglary and witness intimidation after an eight-day trial at Wolverhampton Crown Court. 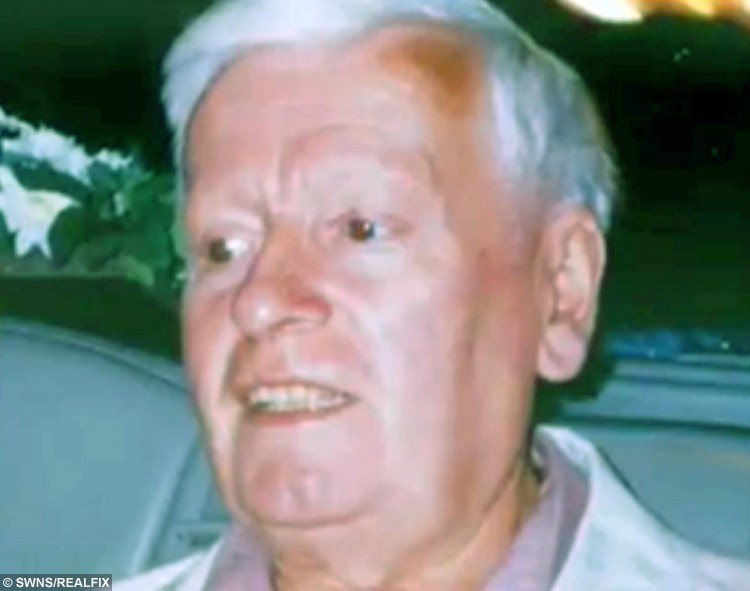 Jones, of Oldbury, West Mids., was jailed for 14 years with a four year extended licence period at Birmingham Crown Court.

Sentencing him, Judge Stephen Eyre QC said:”You started to do what you have done more than 20 times before which was to take the car which did not belong to you.

“Mr Stocking intervened, it is clear that you had a choice. You could have ran away, Mr Stocking would not have been able to stop you.

“It’s clear you resisted Mr Stocking and decided to carry on taking the car.”

“Mr Stocking ended up under the car. You had another choice. You drove off in the car dragging Mr Stocking along.

“You reversed and drove off at speed. Mr Stocking was dragged under the car for several yards and was left lying in the road.

“When you had to get away from Mr Stocking you knew he was under the car and you used the car to drive away dragging him along, in effect using it as a weapon against him.

“You were intending to cause him serious harm. Your behaviour at the time was callous and cowardly and you persisted in the callous attitude thereafter.

“It is apparent if it is necessary to do so you’re prepared to use serious violence on those who get in your way.”

Jones, who appeared via video-link, showed no emotion as he was jailed and sat with his arms folded in front of him for most of the hour-long hearing.

The court heard Mr Stocking, who was not well enough to attend the hearing, used to be fit and active but had been left housebound after the attack.

Prosecutor Cathlyn Orchard said the pensioner had been diagnosed with post traumatic stress disorder by his doctor.

In his victim impact statement, which was read to the court, Mr Stocking said: “Since this incident I spent eight weeks in hospital.

“I am now at home however I’m virtually housebound. I can’t walk properly, I’ve had to have a stair lift installed at my home.

“I used to be fit and active for my age. I used to drive and help other people go out and about.

“I used to go in my garden and tend to it. Now I can barely walk to my garden. I used to be my wife’s carer, now I have to rely on her.

“I’m unable to eat properly due to the loss of my teeth. I get depressed sitting at home not being able to do anything.”

“Our lives have totally changed. We used to go on holiday three or four times a year, this will not happen now.

“My life will never be the same again.”

The court Jones met up with his then girlfriend Stacey Johnson, 26, who he asked to bring him an ice-cream, after stealing the car and used Mr Stocking’s money to buy drugs.

He then used the Peugeot to drive to a house in Tipton which he burgled in the early hours of May 11 before dropping the stolen television back at his partner’s flat. 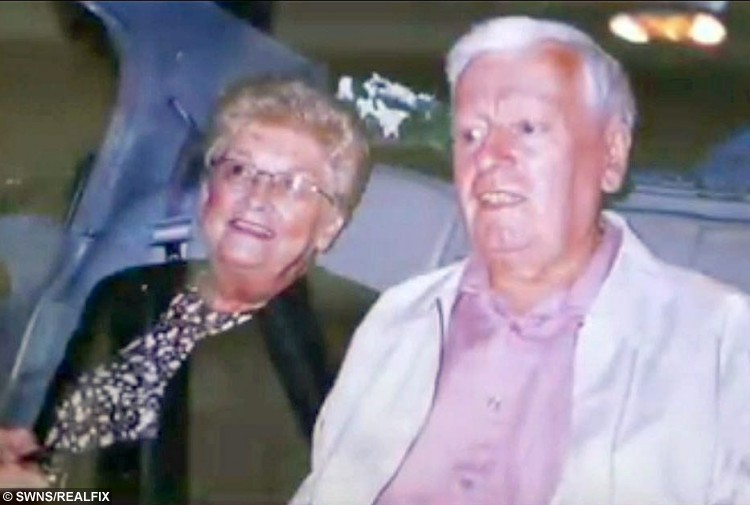 Miss Orchard said addict Jones had appeared before the court on 46 other occasions – with 24 previous convictions for vehicle taking or theft of a vehicle.

He was also on licence at the time of the carjacking after he received a 78 month prison sentence for wounding with intent in August 2011 when he stabbed a victim 11 times.

Jas Mann, defending, said: “The object of that transaction was robbery which went very wrong indeed as far as the victim is concerned.

“This was not planned and this was not the conventional use of a weapon. It was impulsive and opportunistic, not cold and calculated.

Speaking after the hearing, Mr Stocking’s son David, 48, said Jones should have been jailed for life.

He added: “My reaction is that it (the sentence) is not enough but it will have to do.

“He has ruined my dad’s life and I would rather he was locked up for the rest of his life.

“His lack of remorse is sickening, he has been like that all the way through, he is a total scumbag.”

Detective Inspector Pete Rowe, from West Midlands Police, added: “Jones had no thought for the man he left lying critically ill in the road.

“He was so callous in his actions that only hours after the robbery he committed a burglary, using the stolen car.

“He planned his crimes and lay in wait for the man and his wife to return home from an evening out.

“He then used the car in a burglary and implicated his ex-partner by storing stolen goods at her flat.

“Jones thought he was above the law but this was one crime where we were determined to bring those responsible to justice.”

Stacey Johnson pleaded guilty to handling stolen goods at an earlier hearing and received a 12-month community order and was ordered to pay costs of £300.

‘Vampire’ jailed for slashing a friend and drinking his blood

'Vampire' jailed for slashing a friend and drinking his blood