Sent under embargo - no use before 18.00pm October 11 2015 Pia Christopheros with her husband Andreas from Truro, Cornwall, who was was left scarred for life after a man hurled acid in his face. Also pictured is the couple's two-year-old son Theo. See SWNS story SWACID; A man has been jailed for carrying out an acid attack on the WRONG victim leaving a father-of-one scarred for life in a case of mistaken identity. Property developer Andreas Christopheros, 29, suffered a permanent loss of vision and horrific burns when David Phillips flung the corrosive material in his face. Phillips, 48, attacked Andreas on his own doorstep in Truro, Cornwall, after travelling more than 300 miles from his own home in Hastings, East Sussex. But police yesterday said he was not the intended victim and described it outside court as a revenge attack on the wrong man that was "Ill-prepared and ill executed."

A dad scarred for life in a horrifying case of mistaken identity has spoken of the moment his attacker said: “This is for you, mate” – and threw ACID in his face.

Property developer Andreas Christopheros has described how David Phillips, 48, hurled acid over him because he thought he had sexually assaulted a member of his family.

Phillips travelled more than 300 miles from his home in Hastings, East Sussex to Truro, Cornwall – but turned up on the wrong doorstep.

He threw the corrosive liquid as Andreas answered the door, leaving the property developer permanently blind and with horrendous burns.

His wife Pia, 33, also burnt her feet as she rushed to her husband’s aid after the attack in December last year, while their toddler son lay crying upstairs.

The couple watched as Phillips was jailed for life at Truro Crown Court on 9 October.

Now, after ten months of skin grafts and eye surgery, Andreas has told of the moment he opened the door to a man he thought was delivering a Christmas parcel.

He has also called for stricter regulations on the sale of the acid – which can easily be bought in shops – and said that he will never accept the apology of the man responsible.

In graphic detail, Andreas has described how he was “screaming”, his face was “melting” and his eyes were “on fire” as he tried to wash the toxic car battery acid off.

The courageous dad-of-one, who now has to wear a transparent, silicone ‘compression’ mask to protect his skin, said: “It all happened so quickly.

“I remember idly watching a red Peugeot Partner van driving slowly towards the house. I think I assumed it was a Christmas parcel being delivered.

“I opened the door and a man I had never seen before was standing on the doorstep. He was holding a large beaker in his hand.”

“In one moment, he shouted, ‘This is for you, mate,’ and flung his arm up towards me.

“I barely got a look at the person on the doorstep before he threw the acid straight in my face.”

The beaker, filled to the brim with corrosive acid, hurtled towards the ceiling and sent a spray of acid across Andreas’s face and neck, showering down onto his torso.

“Thankfully I realised what it was straight away. I ran to the other end of the house to douse myself in water.

“All the time I was screaming at Pia to phone 999. She was barefoot so suffered burns to her feet as she walked through the acid.

“My face, arms and body were burned. My shirt was disintegrating and I could feel my face melting.”

An ambulance arrived after 20 minutes and Andreas was rushed to his local hospital before being flown to Swansea hospital, one of the UK’s major burns units.

He was placed in an induced coma and kept in intensive care. Doctors told Pia he was unlikely to survive the night.

“It was the longest night of my life,” said Pia.

“I could only look at Andreas and will him to live. The burns, his eyesight – they were all things we could overcome.

“I just couldn’t lose him.” 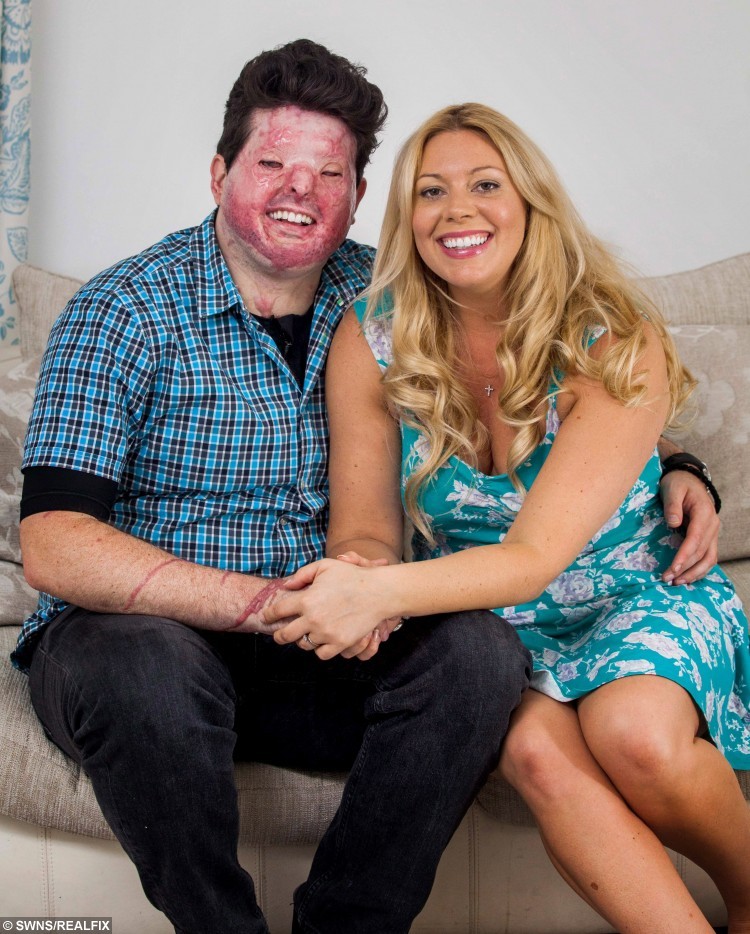 Miraculously, Andreas came around in intensive care. He was unaware at the time but he was on death watch as there was a very high risk of infection.

Blinded in his right eye and with little hope of saving the vision remaining in his left, he was devastated that he might never be able to see his son Theo, now two, ever again.

“I panicked that he wouldn’t recognise me. Would I look like a monster to him?

“I was also concerned about the way Theo would react to the face masks I had to wear. I didn’t see him for six weeks.

“When I did, Theo took one look at me and then ran to Pia, burying his head in her arms.

“Then he looked back at me, held out his arms and shouted: ‘Daddy, Daddy, it’s you.

“He launched himself into my arms and clung onto me like a little monkey. He wouldn’t let go for about 40 minutes.”

Moments after waking up, Andreas signaled for a pen and paper and wrote: ‘Who would do this to me?’

But within minutes he had the whole room laughing, asking: ‘Can I have a pint of cider?’ 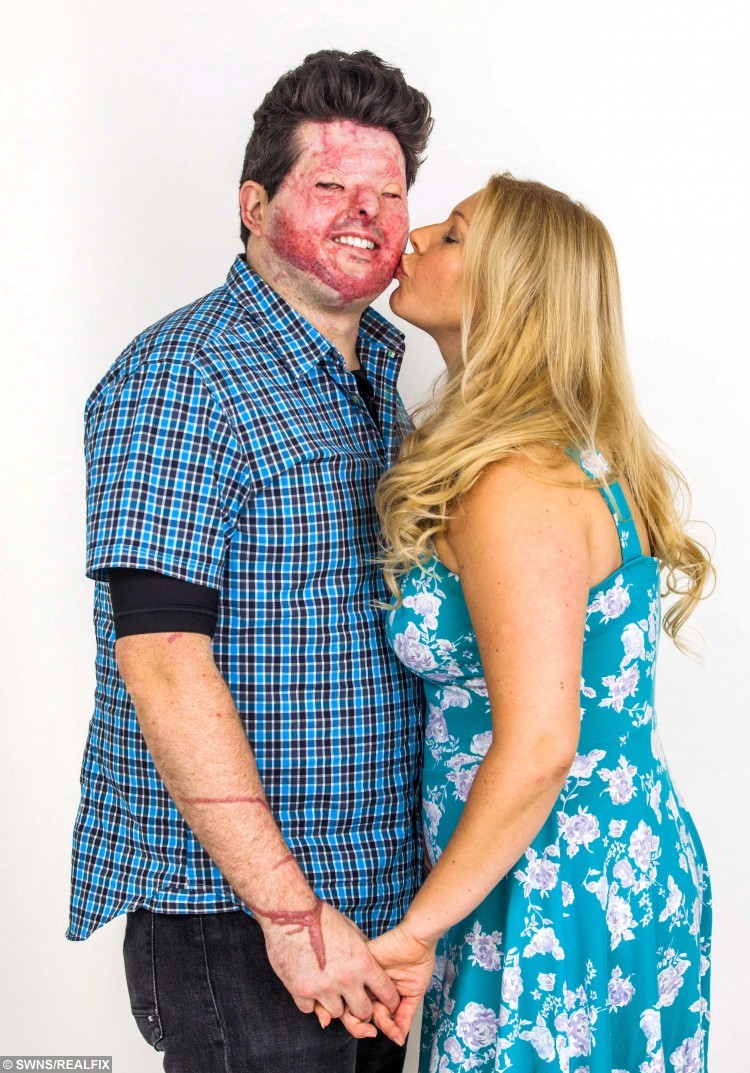 From the moment Andreas woke he was questioned by the police and believes he was under suspicion.

“They were very intrusive,” he said. “They interviewed me straight away. I can barely remember it because I was so sedated.

“But they had to do it there and then as they knew there was a risk I would die, so they had to gather as much evidence as they could just in case.

“I didn’t feel like a victim for a long time. I felt like the criminal as my life was torn apart inch by inch.

“Officers took all of my belongings, all my company files, our phones, Sat Navs and cars while they were trying to establish a motive for the attack.”

“It was only up until about two months ago that I was told they were satisfied I had nothing to do with it and it was a case of mistaken identity.”

“I thought ‘finally’. I’d been telling them that all along and for six to seven months police thought I was connected to something untoward.”

Speaking yesterday after Phillips was handed a life sentence with a minimum of seven years, Andreas said he would never accept his attacker’s apology.

He said: “Life was the right decision.

“As I walked past, Phillips touched his heart and said, ‘Sorry.’ I said nothing. Nothing at all.

“His actions were stupid. I don’t know how he ended up doing what he did, or who gave him the wrong address.

“But I just can’t see a way of ever accepting his apology.

“His defence was predominantly based on the idea that he was in an impossible position.

“But every man has a choice in their actions, even if they are plagued with emotion and revenge. He was not in an impossible situation.” 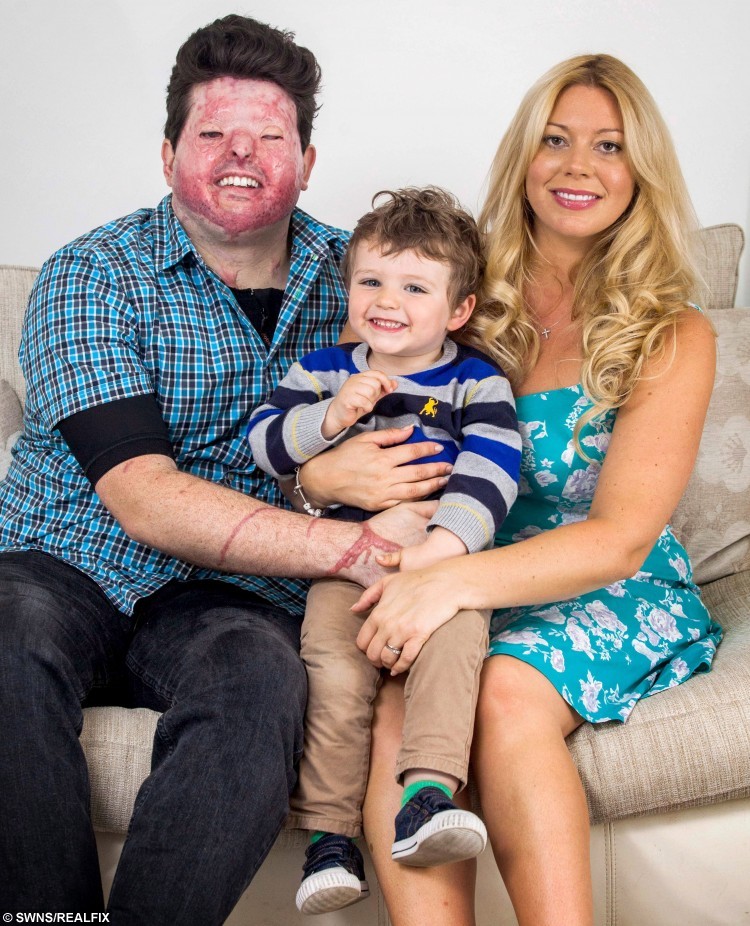 Now, ten months on from the day he was attacked on his doorstep in a picturesque Cornish hamlet, Andreas is calling for car battery acid to be a licensed substance.

“There is no doubt in my mind that this should be a highly restricted substance.

“It is readily available because it is widely used, but that doesn’t mean it shouldn’t be a licensed substance.

“It is absolutely ludicrous that anybody can get their hands on it. In seconds it can ruin someone’s life.”

Andreas’ injuries originally left him unable to look at himself, and he had mirrors boarded up.

“There have been times when I have howled with hysterical tears, but I am never going to allow what happened to define me.

“My injuries will haunt me for the rest of my life, but I am determined that they are never going to overwhelm my life.”

Andreas said the support he received from Devon and Cornwall Police, the NHS and the Katie Piper Foundation, for burn survivors, has been incredible.

He is fundraising for the foundation, and hopes to help them continue their work rehabilitating fellow victims of acid attacks. 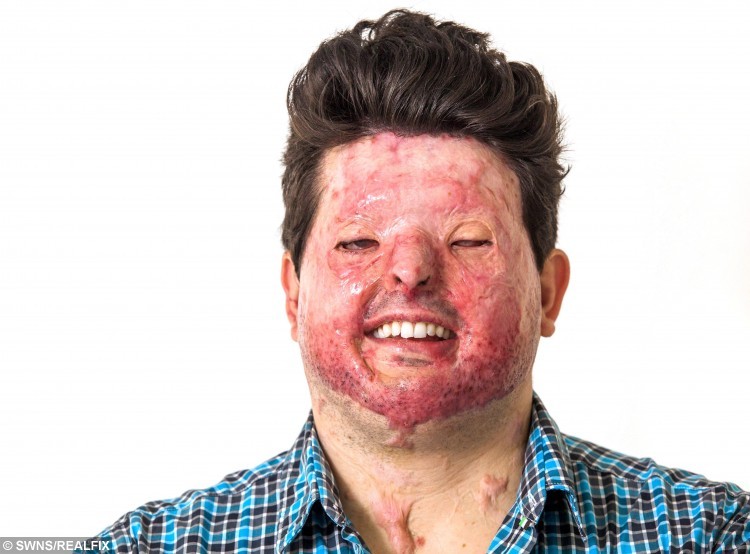