Constance and Penelope Harris arriving at Truro Magistrates' Court. SWTWIN: Identical female twins Penelope and Constance Harris, 25, of Porthleven in Cornwall have been jailed for 18 weeks and 14 weeks respectively in Truro for a string of robberies of food and alcohol from supermarkets. The court heard they were "distracting" staff in supermarkets to steal food and alcohol.

Twin sisters have been jailed after a series of shoplifting offences where they used their identical looks to distract shop workers.

Penelope and Constance Harris, 25, used their physical likeness to confuse security at various stores to leave with trolleys of stolen food and drink.

It is thought they would both get trolleys and one would buy small items while the other would walk out with a trolley full of food and booze. 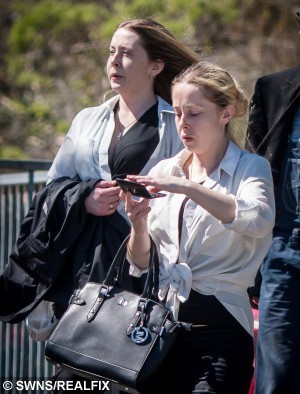 But because they wore the same clothes and looked the same it would appear to staff and on CCTV that only one had been in the shop.

The sisters, of Porthleven, Cornwall, had used similar tactics at Tesco, Marks & Spencer and Co-op stores to steal a total of £1,000 worth of food and alcohol.

Constance wept as she was jailed for 18 weeks while Penelope was given 14 weeks in prison.

“Our record shows you have a complete disregard for court order and nothing seems to have had an effect.”

“We have now both reached the end of the road and both of you are going to prison today.”

Both woman, both drug addicts, had previously pleaded guilty to several charges.

They were jointly charged with stealing goods worth £382 from Tesco in Carbis Bay, Cornwall, on February 2 and items costing £198 from Marks & Spencer in Hayle on March 8.

Penelope also faced charges of stealing alcohol and meat valued at £533 from Tesco in Pool on March 5 and stealing £91.79 from Coop in Hayle.

Prosecutor Alison May said: “They have both made full admissions to working as a team in order to raise funds to support their habits of street drugs to buy food.”

The court heard that the twins were overheard discussing distraction tactics before one pushed a trolley out the door loaded with alcohol and food.

Robin Smith, defending Constance, said: “As far as the joint offences are concerned the two girls volunteered themselves for arrest following a call from a police officer.”

He said drug treatment agencies had detected a “real commitment” from them to now act on their drug habits.

In addition to the jail time, the sisters must also pay compensation of £99 each to Marks & Spencer, an £80 victim surcharge and court costs of £55.