***EMBARGOED NO WEB USE BEFORE 15.00 October 04 2015 BST/GMT*** Ben Harwood a convicted criminal with long term girlfriend Barly Marshall of Mansfield, Nottinghamshire. In February, 25-year-old Ben Harwood was sentenced to a year in Nottingham Prison for possession of cannabis, production of a class b drug, possession of live ammunition and aggravated burglary. However, in July Harwood slipped over while in jail and broke his leg in two places - he was hospitalised for 11 days at QueenÃs Medical Centre, Nottingham. In that time, his partner of six years, Barley Marshall, 22, says she visited him EIGHT times, for six hours at a time. Barley, who's unemployed, claims she and Harwood had manual sex 'numerous times' in the hospital bed while her lover was handcuffed to the bed - in the company of two 'prison officials'.

A serving prisoner was serviced by his girlfriend while he was handcuffed to a hospital bed – in front of prison officers, she claims.

Ben Harwood, 25, romped with randy girlfriend Barley Marshall, 22, five or six times while he was recovering in hospital from a broken leg, she reckons.

Unemployed Barley says she brought the convicted burglar, who was serving a 12-month sentence, KFC and performed ‘sexual contact’ with her man – under the eyes of two prison officers.

Harwood, who served at Nottingham Prison, spent 11 days at the Queens Medical Centre in Nottingham, during which time Barley claims she was able to have ‘sexual fun.’

She said: “I couldn’t believe what we got away with.

“We ate takeaways together and had some sexual fun – it was like being on a normal date.

“I assumed security would be really strict because he was still serving time, even though he was injured – but nobody seemed to monitor us at all.”

Harwood – who was convicted of drug charges and aggravated burglary in June at Nottingham Crown Court – had been remanded in custody at Nottingham Prison since February.

But in July – just one month into his 12-month sentence – he was transferred to the hospital for 11 days after breaking his leg in a fall at Nottingham Prison.

‘On/off girlfriend’ of six years Barley says the injury meant they could have ‘romantic dates’ at the hospital, lasting six hours at a time.

She says she had ‘sexual contact’ with Harwood – despite him being handcuffed to the bed – and claims officials turned a blind eye to the steamy action.

Last month, Harwood was released after 186 days in prison.

The crook, from Mansfield, Notts., was jailed for possession of cannabis, production of a class B drug, possession of live ammunition and aggravated burglary.

Barley, also from Mansfield., said: “I could only visit him six times a month, and we never got to spend any quality time together because visits only lasted two hours at a time.

“I always got searched thoroughly and we were barely allowed to touch.”

But when Harwood slipped in the corridor of the prison in July, breaking his leg in two places, his injuries were too severe to be treated at the prison.

He was transferred from the prison to Queen’s Medical Centre in Nottingham, where Barley could have her steamy dates.

She said: “Obviously I was really worried about it him. I knew that his leg must be bad if they couldn’t treat it from inside the prison.

“But it turned out to be the best part of his sentence.”

“The day after he was admitted to the room, I arrived to find him handcuffed to the bed with a metre-long chain and his leg in a cast.

“There were two prison guards sat on chairs with us, but they didn’t even ID me or search me the first time I visited.

“I couldn’t believe it – I could have been anyone.”

Barley – who is currently unemployed – says she used her free time to visit her boyfriend for ‘dates’ lasting up to six hours a day.

She said: “I was allowed to stay as long as I wanted.

“We’d spend most of the time cuddle up and take selfies together with him in his boxers.

“We’d been apart from each other for a few months, so of course we took the opportunity to have some sexual fun.”

“We didn’t have intercourse, but we would stimulate each other under the covers while he was cuffed to the bed.

“The officers either didn’t notice or they just turned a blind eye.

“They knew I was Ben’s girlfriend so they must have suspected there would be sexual contact.

“We must have done it five or six times. It amazed me that we could get away with it.” 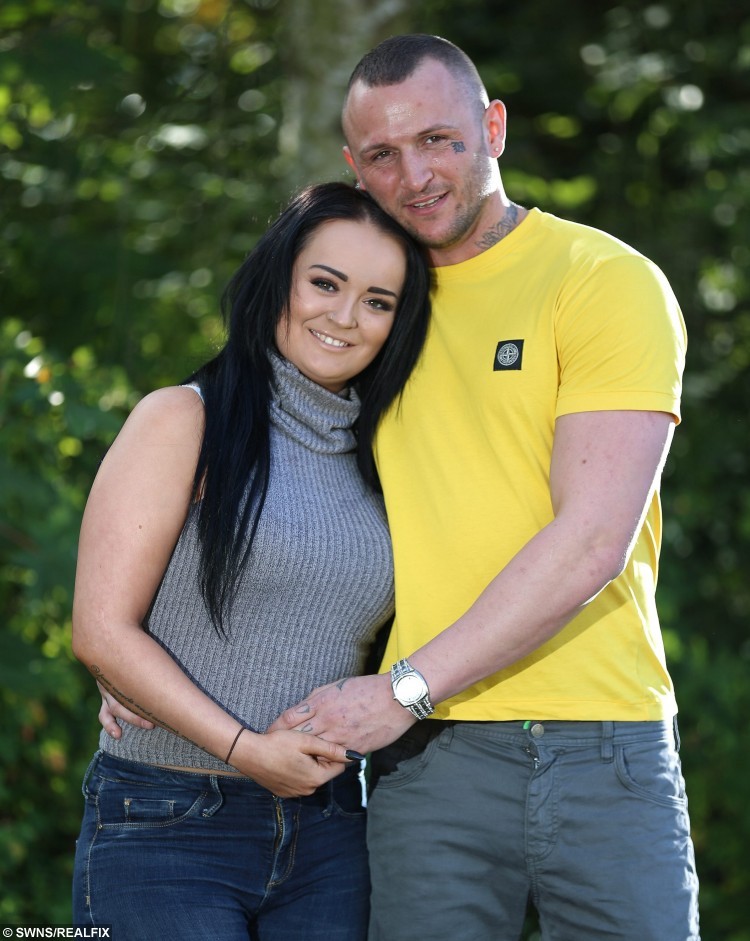 Harwood was eventually transferred back to the prison and supplied with crutches to continue his recovery.

Barley – who now lives with Harwood – said: “It shocks people when I show them the photos from the   because they assume security would be really tight.

“I was shocked too – you don’t expect prison guards to be so relaxed, which is why I’ve decided to share the photos.

“No-one can believe it when I tell them about our prison ‘dates’.”

The Prison Service have vowed to investigate the allegations.

A spokesperson said: “We are urgently investigating these allegations.

“Maintaining prisoner security on hospital escorts is paramount and we will take disciplinary action where professional standards have been breached by our staff.”

Could this be the world’s dullest calendar?

Could this be the world's dullest calendar?