Mandy Dunford outside her home in Middlesbrough. Mandy was stalked by her neighbour who has been released for prison without a restraining order. Police have offered Mandy money to increase security at her home 19 May 2015

When Mandy Dunford found her dream home she couldn’t wait to start a new life in the country.

The remote cottage with nine acres of land was the perfect place for Mandy, 54, to spend her retirement.

But living less than 200 metres away was neighbour from hell Kenneth Ward determined to turn Mandy’s dream into her biggest nightmare.

During a terrifying nine-year campaign, he drove the former police constable to despair by watching her every move.

Maggot-infested animal carcasses were left on her doorstep daily and Ken followed Mandy around her property wearing nothing but his socks and boots.

Mandy managed to capture Ken on camera and in 2011, he was handed a five-year prison sentence.

Incredibly, he’s now won the right to return to his ramshackle home.

Horrified Mandy says: “Ken Ward is the guilty one so why I am being punished for what he did to me?

“The courts have made the decision to let him back and they’re driving me out of the home I love.

“If he comes back I have no option but to leave because I can’t live my life in constant fear. When he was convicted I thought this nightmare had come to an end. It’s only the beginning.”

Mandy was fulfilling a lifelong dream when she moved into the house in December 1998.

She’d always wanted to live in the country and the rural property instantly won her over.

She says: “I had an image in my mind of what my dream house looked like and as

I drove up the country lane, I knew it was the one.

“I love horses so with nine acres of land and two barns, the place was perfect.

Although the place needed renovating, I could see myself living there for the rest of my life.

“There was a rundown cottage at the end of a track and I was curious who lived there.

“The estate agent told me it was a little old man so I didn’t give it much thought. He’d apparently lived there for years.”

Within minutes of moving in, Mandy says neighbour Ken was on her doorstep keen to introduce himself.

She says: “Ken lived with his brother and mum back then and they used the track running behind my house to reach their place.

“He seemed friendly and charming but it wasn’t long before he I noticed him wandering around my land. He was always dressed in army camouflage which I thought was strange and a little eccentric.”

“There were two run-down huts in between Ken’s house and mine which he’d been using for storage for years. They were full of old aeroplane relics and although I owned the land they were on, they weren’t harming anyone.

“Besides, I had the home of my dreams and I didn’t want to make a fuss so I didn’t object.

“But when Ken said he wanted to use some more of my land for storage I said no.

“I thought it was odd because he seemed taken aback that I’d actually turned him down. He was clearly a man who was used to getting his own way.

“It wasn’t long before he asked me again and although he was becoming a nuisance and a pest, he wasn’t in any way aggressive.”

Over the next six months, Mandy says Ken knocked at her door up to four times a day.

She says: “He asked for favours constantly but I was so busy with the renovations I didn’t have time to spare.

“He asked me to tow his brother when he broke down and in winter, he asked to use my 4×4 to get his shopping up the track because it was iced over.

“I didn’t mind helping out but the more I did the more he came to expect.”

“Then I got home home one day and couldn’t park on my drive for cars.

“I found out that Ken had advertised his home as a museum and he was in one of the huts showing people around. He’d actually told them to park on my drive.

“I was furious but he didn’t bat an eyelid.”

When Mandy arranged for a decrepit gate to be replaced along a bridleway at the back of her house, Ken’s behaviour suddenly changed.

She says: “The gate was falling to bits and I didn’t want my dogs to wander down the lane so I contacted the National Parks to have it replaced.

“The gate is on my land but for some reason Ken didn’t want a new one. I could see him swinging on it from my window trying his best to break it.”

“From that day on, Ken Ward never spoke to me again and I started to think I’d made the worst mistake of my life moving next door to him.”

Ken made Mandy his target and she was constantly on edge.

She says: “I opened my door one morning to find a pile of dead mice on my doorstep. Then it was piles of rabbit carcasses crawling with maggots. I knew it was Ken because his brother worked as a pest controller so he could easily get his hands on them.

“I found something new everyday and I dreaded going outside. If I wanted to take the dogs for a walk I had to put them in the car because I was scared they’d come to harm.

“I had nine acres but had to drive to walk my dogs because of Ken.”

Mandy, who lives alone, was at home one night when she heard a tapping at the window.

To her horror, she saw Ken peering in.

She says: “He never blinked and I can’t describe the cold, calculated look in his eyes as he tried to intimidate me.

“From that day on he was determined to make my life a misery.

“I was tending to my horses one morning when I glanced down the track and saw Ken standing outside his house.

“When I looked again, I realised he was looking at me through a pair of binoculars and his trousers were round his ankles. I couldn’t believe my eyes when I saw he was touching himself.

“I hurried back home thinking I must have been mistaken. Ken was trying to provoke a reaction and I wasn’t going to give him the satisfaction.”

Ken stepped up his menacing campaign against Mandy and he began parading around half naked almost everyday.

She says: “He didn’t say a word but every time I went out to see to the horses he was there, either staring right at me or hiding behind a bush.

“He sat outside for hours on end with a rifle, as though he was on guard duty.”

He fired his rifle into the air to frighten me but when he pointed it directly at me one day I went straight to the police.

“I thought he was going to kill me so when the police said they couldn’t do anything without evidence, I was devastated.

“It was my word against his and I’m sure people thought I was going mad. I couldn’t eat or sleep because I was terrified what Ken would do next.” 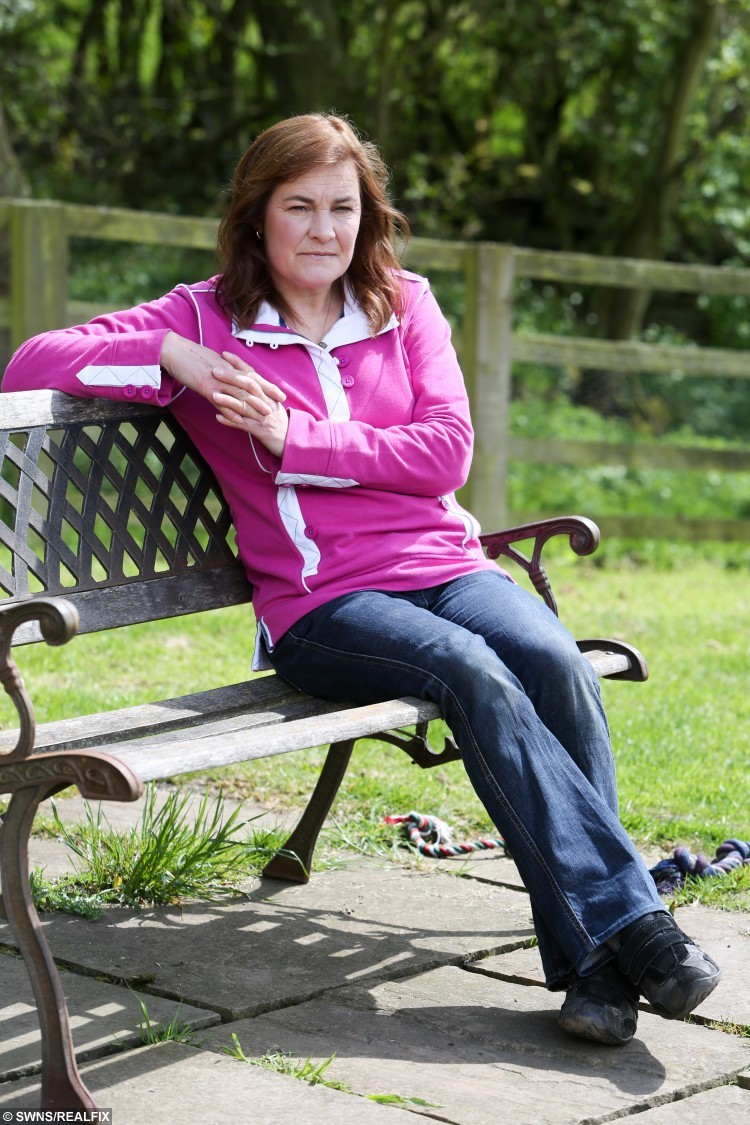 Mandy, a retired police officer, confided in a friend and they came up with a plan to capture Ken in action.

She says: “I bought a tiny camera off the internet which I managed to attach to a fence post when Ken was standing just feet away with his underpants around his ankles.

“I was terrified I’d drop it. During one of the coldest winters on record he stood half naked in snow. The man had no shame.”

Over the next three months, Mandy recorded 50 hours of footage and went back to the police.

When police raided Ward’s property they found a cache of weapons, including machine guns.

He admitted 11 counts of exposure, three charges of possessing a prohibited firearm and a range of other firearm offences.

A Sexual Offences Prevention Order was made, stopping Ken from going within just 200m of Mandy’s home.

It was then changed by Judge Peter Armstrong at a later hearing allowing him to approach her property from all sides.

She says: “The restriction means Ken can return to his house as early as next June and I’ll still be able to see him from my living room windows.

“I feel completely let down and I hold the court system entirely responsible.

“I can’t understand how they can let him back. They’re putting my life at risk and nobody seems prepared to do anything about it.

“Ken has shown he is the type of person to seek out revenge and who knows what he might do to me to get his own back.”

Mandy has since been offered £5,000 by police to step up security in and around her home.

It’s been suggested she uses the money to pay for a panic room.

She says: “Even the police are concerned they can’t protect me from Ken.

“I don’t want to be incarcerated inside my home with bars up at the windows because I want to be outdoors, walking my dogs and riding my horses.

“I can’t even sell up and move because the house is worthless, so I’ve had to buy another when I can go to should Ken come back. Who would buy my house with a convicted man living next door.

“I thought my nightmare was over and Ken would be out of my life forever.

“If only that was true.”

Take two Darth Vaders, a Storm Trooper and a Wookie and you’ve got yourself one heck of a wedding