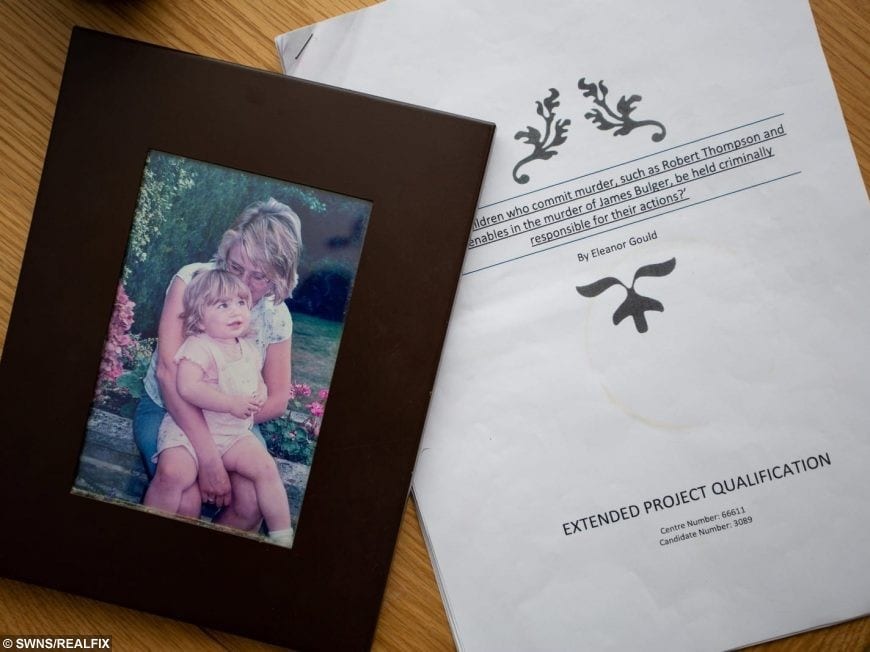 A mum fighting for a longer sentence for a teen who killed her daughter after she ended the relationship with him to focus on her A-Levels has revealed she had written an essay weeks before – about child killers facing proper justice.

Tragic Ellie Gould, 17, had written how youngsters who kill are ”unforgivable” just weeks before she was stabbed to death by Thomas Griffiths, then 17.

Tragic Ellie – who wanted to join the police – had broken up with him the day before saying she wanted to spend more time studying – so he knifed her thirteen times.

Griffiths, now 18, has been jailed for life with a minimum of twelve years six months – but the sentence is being reviewed after more than 100 complaints it was too lenient.

Ellie’s mum, Carole, has now revealed she had written an essay for her A-levels about child killers just months before as part of a college project.

Including details about the James Bulger case the essay was called: ”Should children who commit murder be held criminally responsible for their actions?’

Ellie’s essay, as part of her Extended Project Qualification, is strongly worded and emphasises that young people and children are criminally responsible for their actions.

One extract says: ‘Children should be held criminally responsible as each person has the ability to act in a way which they believe is to be right or wrong.

”Children have this ability and they have the understanding that murdering a person is one of the most detrimental and heartless things a person can do.

Carole, of Calne, Wilts, said: ‘“Ellie wrote an essay about child killers in the weeks before her murder.

“It was titled ‘Should children who commit murder be held criminally responsible for their actions?’

”She thought yes, they should, as every person has control of their actions and decisions.

“Ellie wrote about the murder of James Bulger. She wrote that the boys who killed him should be brought to justice, for James and his poor family.

”Ellie thought the sentences for child killers should bring justice for the victim and the victim’s family – so that’s what we’re fighting for.”

Ellie’s essay, as part of her Extended Project Qualification, is strongly worded and emphasises that young people and children are criminally responsible for their actions.

She wrote: ‘They should [also] be held criminally responsible for their actions to give [James Bulger’s] family the closure that they needed.’

She also discussed the effect of murder on the victim’s parents, a harrowing read considering the events in Ellie’s life just weeks later.

She wrote: ‘They were ordinary people who didn’t deserve to go through all of that pain and suffering.

‘Many people who commit crimes from a young age have natural desires to make bad choices and are not willing to change.

”[Children] should be held criminally responsible to keep society safe to ensure that they cannot commit similar acts that could be detrimental to themselves or others.’’

Carole added: “Ellie was switched on. She could judge a character well and loved watching detective programmes on the TV.

”She even thought about joining the police academy apprenticeship after sixth form.

“This was her first boyfriend, and there were no red flags to start off with.

”He was quiet, came over for dinner with our entire family and was quiet. Griffiths was a normal boy, not someone we thought was capable of what he’s done.

Carole added: “Our family has been devastated by the system. Ellie would be screaming at me to get her the justice she deserves.

“Her brutal end plays on my mind constantly. He has a devious and callous mind.

“I’ll never forgive Thomas Griffiths for what he’s done. It was violent and so out of the blue, it’s shocking that he was capable of such violence.

“The defence argued his crime wasn’t premeditated as he didn’t bring a weapon to the scene. Griffiths used his hands as a weapon, wrapping them round my daughter’s throat. Those were the first weapons he used.

“The sentence for Griffiths is nowhere near long enough. For me to lose my child, he should serve at least 17 years, the length of her life.

Ellie and Griffiths met in sixth form after being part of the same friendship group.

Ellie’s family is now appealing Thomas Griffith’s sentence, arguing it should be longer given the severity of the crime and the remorse letter lacking any empathy for Ellie.

The appeal decision is due to be read on the 6th December, to decide if Griffiths’ sentence should be reconsidered.

« Previous post 'I Avoid The Pet Aisle So I Don’t See Images Of Cats' - Woman Has Told How She Struggles With Everyday Tasks Due To Her Crippling Fear Of CATS
Next article » "Doctors Had Been Telling Me To Just 'Get On With It'"- Maternity Nurse Gives Up Her Own Baby Dream After Painful Periods Leaves Her Begging For Hysterectomy...Age 25