Jean Kelly who has been jailed. See Ross Parry copy RPYJUDGE: A vile niece who stole Ã36,500 from her 101-year-old aunt and left her begging for help from other family members has been jailed. Callous Jean Kelly, 62, plundered the bank account of her elderly aunt Laura Judge for six years, while other family members thought she was caring for their aunt. Mrs Judge had been due to attend the sentence via a live video link from Wakefield Crown Court; however Recorder of York Judge Stephen Ashurst explained that she had been taken ill and was no longer able to make the journey.

A vile niece who stole £36,500 from her 101-year-old aunt and left her begging for help from other family members has been jailed.

Callous Jean Kelly, 62, plundered the bank account of her elderly aunt Laura Judge for six years, while other family members thought she was caring for their aunt.

Kelly had been asked by Mrs Judge’s husband on his death bed to take care of his wife.

But instead, Kelly left her aunt sitting in a dilapidated house, stashing cards and messages sent by other relatives, and refusing to take her to hospital appointments – leaving Mrs Judge blacklisted with the NHS.

In a victim impact statement read to court, widow Mrs Judge told how her neice had “almost destroyed me”, leaving the pensioner, who had never owed any money throughout her life, faced with “dying in debt”.

Centenarian Mrs Judge had been due to attend the sentence via a live video link from Wakefield Crown Court; however Recorder of York Judge Stephen Ashurst explained that she had been taken ill and was no longer able to make the journey.

In her statement read to York Crown Court, poppy seller Mrs Judge said: “I want this statement to be read out in court.

“I want Jean Kelly to know how she left me afraid in my own home.

“I am much stronger than I was because of my other nieces who have since helped me.

“She almost destroyed me, they have restored me.”

Kelly, who sat in the court waiting room alone with an overnight bag packed before the sentencing, remained stony-faced as her aunt’s words were read out.

Mrs Judge’s statement continued: “Until 2007 I lived with my husband Ernest.

“We were together for 70 years and I miss him dearly.

“We had savings and I had a small pension – we have never relied on anybody for financial support and I have never been in debt in my life.

“Now I have bills I cannot pay and I will die in debt.”

Mrs Judge continued: “Since Earnest died I have been lonely and could not predict when Jean Kelly would visit.

“For the last few years I feared her calling.

“She has had a negative impact on my life and left me feeling vulnerable, anxious and with very little dignity.

“I knew she was stealing from me. I challenged her and she would become difficult, telling me I was wrong.”

Kelly, from Normanton, Wakefield, West Yorks., – who family members believe could have taken up to £45,000 – had been asked by Mrs Judge’s husband Ernest to look after his treasured wife just before he died in 2008.

They had no children of their own.

In her statement, Mrs Judge said she had not received any birthday or Christmas cards, that she had no money in her purse to pay the window cleaner and there was not much food in the house.

She also described how Kelly would bring her dogs round and leave hair and excrement in the house.

Mrs Judge described her dignity as at rock bottom.

She said: “I am hurt and very angry that someone could do this in my husband’s memory.

“I shouldn’t be having this type of stress at my time of life.

“It is unfair and it was an abuse of trust.”

Judge Ashurst described Kelly’s breach of trust as a “cynical exploitation of a vulnerable lady”.

Jailing her for three and a half years, he told Kelly, who was found guilty of theftand breach of trust: “For 30 years you have been accused and convicted for stealing from various family members and friends.

“Between 2008 – 2014 you stopped even lower by stealing from your aunt who was in her late 90s when you emptied her bank and post office accounts.

“You raided her savings for your own benefit when you were supposed to be caring for her.

“She had been reluctant to allow you to have anything to do with her affairs and it was only out of loyalty to her husband that she let you in.”

Judge Ashurst continued: “This is an extremely bad case.

“I would be failing in my public duty if I did not impose a sentence that was appropriate for the public’s revulsion.

The scale of Kelly’s deception was only brought to light when Jean and Alma Hunt, went to visit their aunt for her 100th birthday.

They found Mrs Judge, who was an active poppy seller until she was 98, frail, scared and upset. 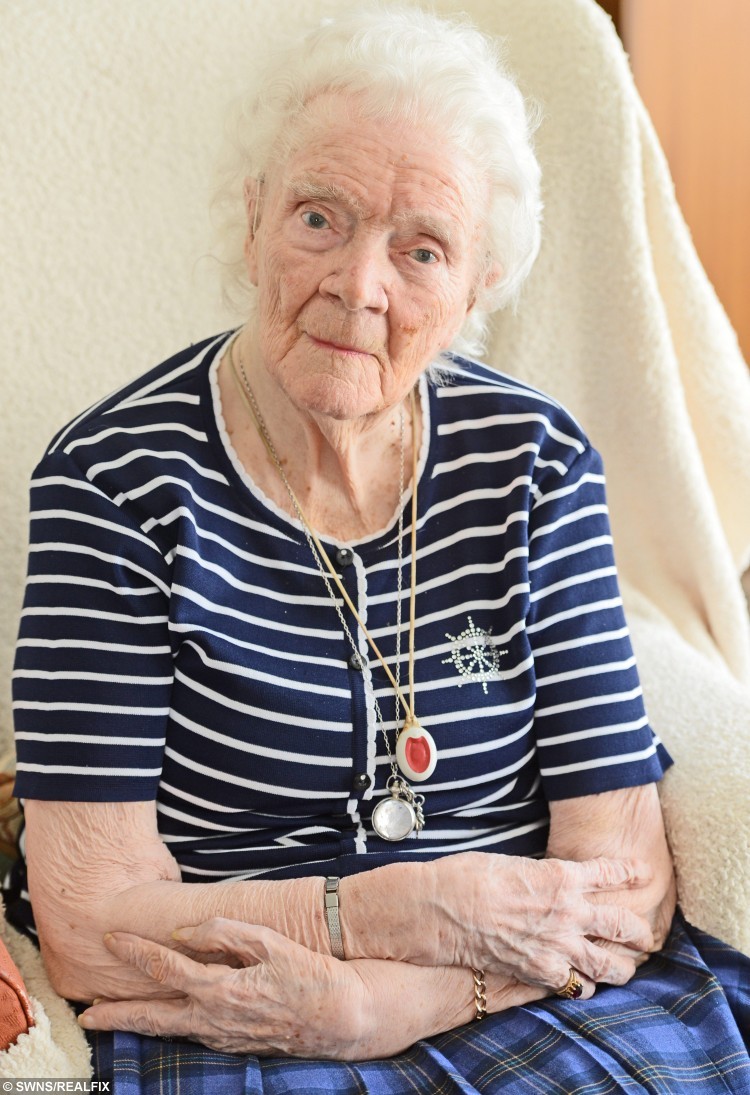 Speaking about the sentence, Jean Hunt who, along with her sister Alma Hunt, discovered the state her aunt had been left in, said they were “disappointed” with the length of time imposed.

Alma Hunt, 53, said: “We hadn’t been to see Auntie Laura for a while because our own mother was really unwell.

“We just assumed that she was being looked after by Jean Kelly.

“When we all came to visit her just before her 100th birthday, she was frail and upset and said she thought we had abandoned her.

“It was absolutely devastating. We’ll never forget that day.”

Jean Hunt, 56, who lives with her sister Alma in Normanton, West Yorks., said: “We were looking after our mum but if she had known what was going on, she would have sent one of us down to see Auntie Laura.

“It took us about a week to realise there were discrepancies in her bank account.

“We got the police in straight away.”

Mrs Judge, who was a Land Army girl in her younger days, described how frustrated she was that she had ever trusted Kelly to come into her house.

Sitting in her house in the village of Little Smeaton, North Yorks., she said: “I worked in the finance department for Boots for years so I know what I’m doing with money.

“I was absolutely staggered when I looked at my bank statement. It had gone down dramatically.”

Alma Hunt, who’s father Harry Hunt was Mrs Judge’s brother, described how Kelly had isolated Mrs Judge during the years she had been looking after her.

Alma said: “Jean Kelly said she was coming round to see Auntie Laura every day but we’ve since found out it was more like twice a week.

“She had stopped all the carers coming and there were dozens of cards from family members and hospital appointment letters that had just been left unopened.

“Auntie Laura had been blacklisted from the hospital because she’d missed so many appointments.”

“We’ve had to set everything up again. We’ve even got a picture of Jean Kelly on a book for the carers so they know not to let her in.”

In a final act of cruelty, Kelly denied the charges and Mrs Judge was forced to give evidence against her niece during the three-day trial at York Crown Court.

With her ordeal finally behind her, Jean Hunt said Mrs Judge is finally getting back to her normal self.

She said: “She’s much better now. Remembering what we walked in on a year ago – it was devastating.

“But she’s got so many more years in her yet. She’s back to being fighting fit.

“Most of all, she would just like her three-piece suite back.”

‘I’ve never been happier!’ Woman ditches her husband in favour of her 35 cats

The most hotly-anticipated charity calendar has finally arrived…

The most hotly-anticipated charity calendar has finally arrived...