Jamie Riddick. A young driver accused of causing the deaths of three people in an horrific Leamington car crash has been jailed for nine years. See NTI story NTICRASH. Jamie Riddick (21) pleaded guilty to three counts of dangerous driving. He was originally charged with careless driving. It followed the deaths of Emily Jennings, 27, Nathan Rhodes, 23, and Ryan Case, 25, who lost their lives after a Citroen Saxo travelling out of town on the A425 left the road and smashed into a tree and a wall on June 20. Emergency services were called to Radford Road near the junctions of Willes Road and Eastnor Grove around 2.45am but all three were already dead. Front seat passenger, 21-year-old Charlie Smith, was taken to hospital with serious injuries but survived.

A drink driver who only had a provisional licence when he smashed a car into a wall and killed three of his friends has been jailed for nine years.

Sozzled Jamie Riddick, 21, was twice the legal drink-drive limit when he lost control of a Citroen Saxo at 2.45am on June 20 last year.

Paramedics rushed to the A425 in Leamington Spa, Warks., where the car had careered into a tree and a wall.

Three of Riddick’s pals who were passengers in the car, Emily Jennings, 27, Nathan Rhodes, 23, and Ryan Case, 25, were confirmed dead at the scene.

He was jailed for nine years and disqualified from driving for 12 years.

The court heard Riddick, who wore a suit and a black tie, was two times over the legal alcohol limit.

He also drove the Citroen Saxo, which had no MOT, despite having no insurance and only having a provisional licence.

The court heard Riddick had drank half a bottle of vodka and hit his girlfriend before leaving the house.

He had offered his four friends a lift when they struggled to get a taxi but when he was quizzed by police after the crash he denied even driving the car. 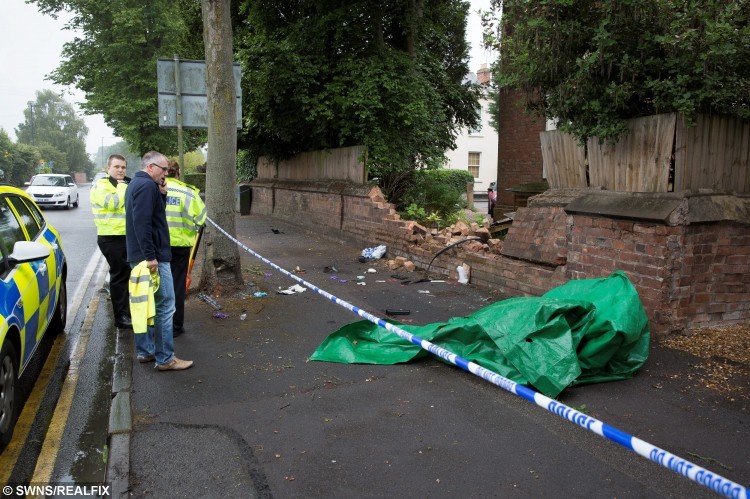 The court was told the Citroen was in a very bad state of repair with three under inflated tyres and worn brakes.

After the fatal smash, friends and family left flowers and cards paying tribute to the trio at the scene.

At the time witnesses said they were awoken by what sounded “like a bomb going off” and saw three bodies “strewn across the pavement”.

Carpenter Nathan lived in Southam, Warks., while tragic dad-of-two Ryan, from the nearby village of Stockton, worked for Praxair Surface Technologies.

Mum-of-one Emily was a beautician who lived in Warwick with her daughter Phoebe.

Paying tribute to her Emily after the crash, her mother Gill Jennings, 67, a retired council worker, said: “She was beautiful, very kind and she always wanted to help people.

“She was very clean-living and a wonderful mother to her nine-year-old daughter Phoebe.

“I had to identify her body. It destroyed me completely and ripped my heart out. The family is absolutely devastated, especially her little girl.

“She was just a special person.”