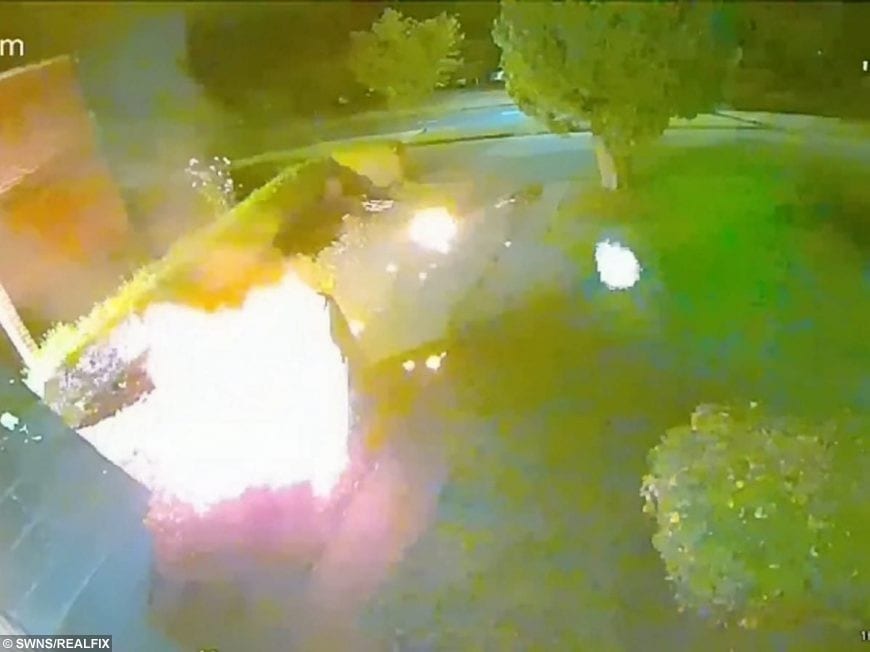 Shocking footage captures the moment a disabled woman’s mobility scooter bursts into flames after being torched on her driveway by a cruel arsonist.

Kirsty Shaylor, 45, was asleep in bed with her partner when a hooded thug crept up her driveway at around 1am last Thursday (18/7).

CCTV footage shows the £1,500 scooter exploding into a fireball outside the property before the suspect makes his escape in a waiting getaway car.

A passing ambulance crew spotted the inferno and alerted the fire service before the flames could spread to the house in Lyndon, Solihull, West Mids.

Kirsty, who suffers from the debilitating condition fibromyalgia syndrome, has now been let too terrified to return home with her children Archie, five, and 15-year-old Kaian.

She said: “We didn’t have a clue as we were asleep. My partner Jamie looked out the window in the morning and said ‘the mobility scooter’s blown up’.

“We looked at the cameras and saw what happened. It was really frightening to see. I couldn’t believe it, I was horrified and in complete shock.

“I’ve no idea who did this because I’ve got no enemies and barely go out. It makes it worse not knowing who did it.

“I’m petrified about going back but my son who’s autistic wants to because he hates the change of being at my mum’s. I don’t feel safe even here.

“If the ambulance hadn’t gone past a minute after the explosion I think we could’ve lost them.

“I had been feeling poorly so I slept on my own upstairs and my partner and Archie were in the front room.

“One of the bins out the front and the camera which recorded the incident has melted, it could have easily spread to the house and been much worse.

“I suffer from anxiety and when I went back to the house on Thursday night I smelt smoke from someone’s fire and had a panic attack. It was horrible.

“My mum can’t walk at all, my mum she is a lot worse than us. She’s stuck now she can’t even get out the house, that’s what’s breaking my heart for her.

“For me, because of my fibramyalgia, walking further than the end of the road, that will put me in bed for a few days in pain.

“It’s had a huge affect on the family. I’m petrified about how I’m going to get Archie to school in September.”

Kirsty doesn’t know how she will afford to replace the scooter, which was uninsured, shared between herself and her mother Sandy, 75, who is housebound without it.

She added: “A neighbour suggested I start a crowd-funding campaign but I’m too embarrassed to ask people for money.

“My disability allowance is only £100 a month. My dad had to sell his car to buy us the scooter. It had just had new batteries put in which cost £300.

“We don’t know how we’re going to cope.”

A spokesperson for West Midlands Fire & Rescue Service said: “We received a call at 12:51am on July 18 which originated from the ambulance service.

“We sent a crew from Sheldon fire station and three fire fighters attended to find a mobility scooter which was 100 per cent alight on a front driveway.

“They used a hose reel to extinguish the blaze. The stop message came at 1:06am. The fire is believed to have been started deliberately.”

West Midlands Police confirmed officers are investigating and urged anyone with information to contact the force on 101 quoting incident 20SH/170312B/19.