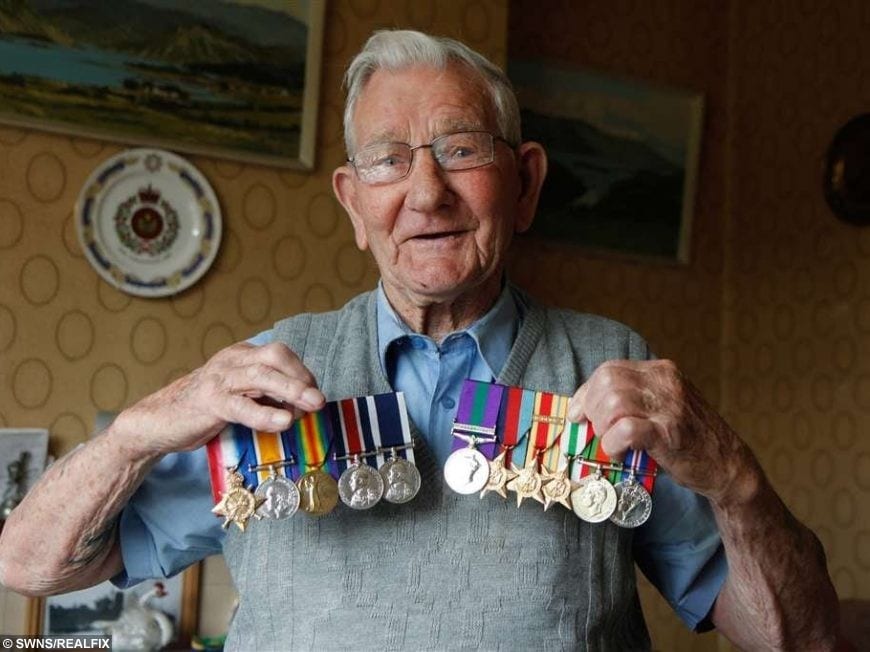 Cruel thieves have stolen medals belonging to a 106-year-old Second World War veteran and his dad – while he was watering his plants.

Burglars swiped widower Leslie Stelfox’s six medals and his late father Arthur’s three medals from World War One from his home – the second time they have been pinched in just five years.

Leslie served during the campaign for North Africa as one of the heroic Desert Rats.

Last weekend’s raid at his home in Milton Regis, Kent, is the second time the same medals have been stolen in five years.

Police were able to return him with his honours two months after thieves took them and other belongings including a watch and cash in 2014.

Leslie said: “This is another kick in the teeth.

“The medals are no good to anybody else, but they proved I’d done my bit for the country.”

Leslie discovered they went missing from his home between 1pm and 3pm on Saturday after he came back inside from watering his plants.

The veteran served in Cheshire regiment, and fought against the Nazi forces led by the Erwin Rommel ‘Desert Fox’ in North Africa.

He said: “It was very quick. I was in the garden doing my watering.

The fuming pensioner said the loss was like “losing your wedding ring”.

“You can understand people taking money and what not, but they could have left the medals.

“I’d like to get them back. They’re earmarked for my grandchildren.”

Leslie’s friend Richard Stew said: “It’s just so awful his medals have been taken again in just a few years.

“They aren’t really worth anything but it’s the sentimental value of them – it’s like losing your wedding ring.”

Leslie’s wallet, with about £45 inside, was also taken and cases, storing his army records, passport and birth certificate, were smashed, although the documents were not touched.

The centenarian, who has lived in his home for more than 30 years, said he did not yet know if more belongings had been taken.

Police are investigating. PC Hannah Cooper said: “We are very keen to speak to anyone who might have information about who is responsible for this offence, which has deprived the victim of some items of sentimental value.”

During WWII the Italian leader Mussolini requested help from his Nazi allies to protect their colonies in North Africa after declaring war on Britain and France in 1940.

Hitler sent a motorised force dubbed the Afrika Korps under the command of Erwin Rommel to block Allied attempts to drive them out of the region.

Britain’s 7th Armoured Division was dubbed the ‘Desert Rats’ after its pivotal victory over the Nazis in the Western Desert Campaign allowed the Allied forces to continue their move up towards Italy.

The campaign was made into the 1953 black and white film Desert Rats by 20th Century Fox, starring Richard Burton, James Mason, and Robert Newton.

It depicted the campaign after German Field Marshal Erwin Rommel, played by Mason, and his Afrika Korps had driven the British Army into headlong retreat toward Egypt and the vital Suez Canal.

Those belonging to his late father were three 1914 campaign medals, one for long service and a special one relating to HMS Swift, which would have been awarded for either saving the ship or someone’s life.