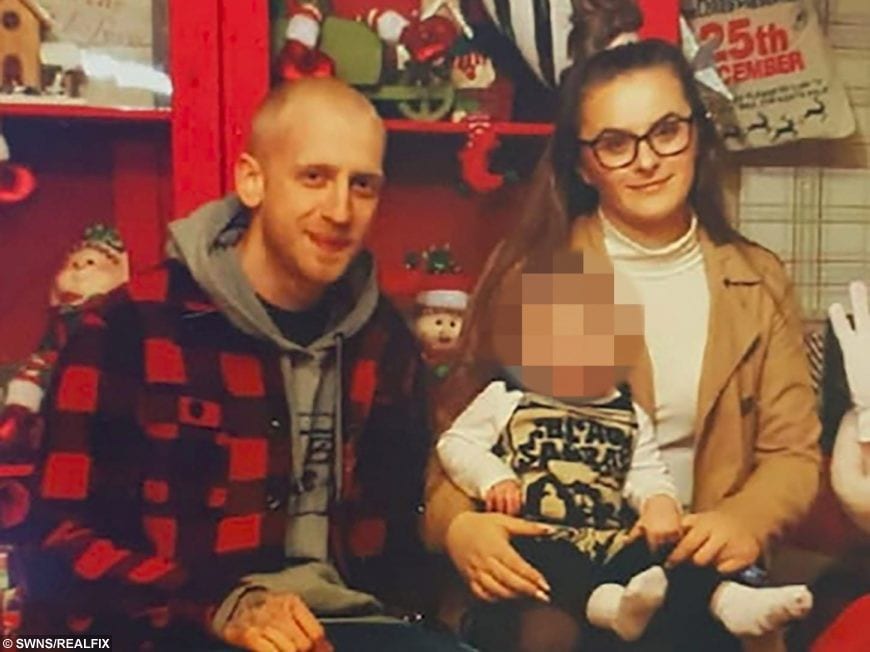 A mum’s ex-boyfriend looked her dead in the eye and said “I’m going to kill you now” before deliberately crashing into a tree when she refused to rekindle their relationship.

Chloe Wilson, 20, is lucky to be alive after suffering a series of shocking injuries in the horror smash including a broken collarbone and a hairline fracture of her spine.

She is plagued by the image of her drunk ex-boyfriend’s vow to kill them, which left Chloe fearing her 16-month-old daughter would be without both parents.

Chloe had turned down Liam Elsom’s advances moments before the crash on January 19 this year – two months after the pair had originally split.

He coerced her into getting into a white Vauxhall Corsa after threatening to beat up a male friend she had been on a night out with at Corporation bar in Sheffield, South Yorks.

She immediately suspected Elsom, the father of her daughter, Aria, was drunk and repeatedly pleaded with him to stop the car and let her go.

Elsom’s anger escalated when Chloe refused to give their relationship another chance before smashing into a tree at around 60mph.

The young mum, from Mexborough, South Yorks., spent six days in hospital where she had several pins and a metal plate put in her collarbone.

Chloe also suffered torn ligaments in her left leg, a blood clot after her seatbelt dug into her stomach, and she had to teach herself to walk properly again.

She is now trying to rebuild her life but still undergoes counselling for PTSD, has to sometimes wear a sling when her arm aches and will need physio and hydrotherapy for up to 18 months.

Chloe bravely read out a victim impact statement in court because she wanted to face her former boyfriend to show him he “had not won”.

Elsom, 25, of Greasbrough near Rotherham, South Yorks., pleaded guilty to wounding with intent to cause serious harm, dangerous driving and common assault at an earlier hearing.

Chloe says he didn’t look at her once during a sentencing hearing at Sheffield Crown Court on Monday, June 17 which saw him jailed for ten years.

Speaking after the hearing, Chloe said: “I knew I needed to go and face him. I wanted to look him in the eye to be able to say you did do that to me, you ruined my life but I’m still here.

“I wanted him to know he had not won. It was so important to me to go to court because when Aria gets older she is going to have questions.

“I want her to know I did everything I needed to. He is in prison for a long time but he deserves it for what he did to me.

“He locked me in the car and he was cold. He was saying to me ‘are you going to get back with me?’.

“He said ‘I’m going to kill you now’ and then bang, straight into a tree. He was drunk, he was angry, he was jealous.

“At the time, on that night, hand on heart, I knew he wanted to kill me. It was like ‘if I cannot have her, nobody else can’, I honestly think that’s how Liam looked at it.

“He nearly killed me, our daughter would have been without a mum and dad.

“Whenever I close my eyes, all I can see is Liam saying ‘I am going to kill you now’. I see his face everywhere. As soon as I hear a car brake now, I feel sick. I feel like I’m back in the car again.”

At first, Chloe was besotted with Elsom after they met through work at a fast food restaurant in December 2016 and began dating a few months later in February 2017.

The pair moved in together and Chloe quickly fell pregnant before giving birth to their now 16-month-old daughter, Aria in February 2018.

Elsom was never physically violent towards Chloe during their two-year relationship, she said.

Chloe blames finding messages to other girls and Elsom’s constant drinking as the reasons why they pair eventually split in November 2018.

They continued speaking on a daily basis and went for a daytime trip to York to see Santa with Aria just before Christmas last year.

“At first he was everything I ever wanted, I loved him more than anything and to me, he was the most important thing,” added Chloe.

“At the beginning he was amazing, I could not fault him for anything. We did everything together.

“He started drinking all the time and started being nasty. In the end, he turned out to be everything I never wanted.”

Chloe was invited out for drinks with a male friend in January this year but after walking to the bar to buy a drink, she was taken aback to find Elsom stood next to her.

“I did not expect him to be there. I walked on to the dancefloor and turned around and Liam was there shouting at my friend,” she added.

“He started punching my friend and laying into him. I got in between them and then he punched me which bust my lip.

“I ran off in hysterics and floods of tears. I was looking for my friend but could not find him. Liam was constantly calling me saying if I didn’t get in the car he was going to punch my friend’s face in.”

Chloe gave in to Elsom and got into his car to protect her own friend, which she instantly knew was a mistake after he took off at speed.

“He was going at stupid mile an hour and I put my seatbelt on and braced myself for what could happen,” she added.

“We were flying round these roads but I kept saying I wanted to go home. I was screaming at him saying ‘please, stop the car, you are drunk’.

“He had gone round a bend and the tyres had come up in the air. He was saying to me ‘are you going to get back with me?’

“We were driving so fast and he then looked at me dead in the eye and said to me ‘I’m going to kill you now’. I felt sick.”

Chloe fell in an out of consciousness and remembers seeing Elsom look back at her before slamming the car door shut.

“It all happened so quick. I could not breathe when I woke up, I felt like my chest was closing in,” she added.

“He got out of the car, looked at me and just slammed the door.

“I had to undo my seatbelt. I had a broken collarbone and fractured spine and had to open the car door. The pain was so intense and I must have passed out and I fell on the road.

“I’m the luckiest person ever to survive. Every doctor I saw said I’m lucky to still be here. I genuinely thought that was it.”

Speaking after the sentencing, investigating officer Joanne Dixon said: “I am satisfied with the sentence handed to Elsom.

“His impulsive actions that night have had far-reaching consequences and have resulted in a long recovery period for the victim.

“Domestic abuse and violence will not and should not be tolerated. I hope now that Chloe can find some closure and concentrate on her recovery.”

« Previous post Trio Of Cruel Jet-Skiers Have Been Filmed Harassing A Pod Of 250 Seals
Next article » From Russia With Love: Four-Year-Old Girl's Message In A Bottle Travelled 5,000 Miles From Spain To MOSCOW