Darren Purchon, 11 from Hull, who was robbed of just Ã2. See Ross Parry copy RPYPOUNDS. An 11-year-old boy on his way to school was terrified by two men who threatened to beat him - and then robbed him of just Ã2. Darren Purchon was waiting for his bus to school when he was approached by two men who said they'd hit him unless he handed over his money. The petrified schoolboy dropped the only money he had on him at the time - Ã2 for his bus fare - which was picked up by the heartless yobs.

An 11-year-old boy on his way to school was terrified by two men who threatened to beat him – and then robbed him of just £2.

Darren Purchon was waiting for his bus to school when he was approached by two men who said they’d hit him unless he handed over his money.

The petrified schoolboy dropped the only money he had on him at the time – £2 for his bus fare – which was picked up by the heartless yobs.

His mum Zena Dagnall has now blasted the thugs as “horrible bullies”.

Darren, a pupil at Andrew Marvell School in his hometown of Hull, East Yorks., said: “One of them kept saying to me, ‘Give me my money, give me my money’.

“I told them I only had my bus money on me, but he said he would hit me if I didn’t give him it.”

“That’s when I dropped the money.”

He added: “I’m just getting on with things as normal.

After the robbery, Darren waited until the men had left the scene before rushing back home to tell his mum what had happened.

Miss Dagnall, 41, said: “He was in shock. He thought he was going to get in trouble for coming home and not going to school, but obviously that wasn’t the case.

“He was really shaken up, he thought they were going to hit him.

“I was fuming when he told me what had happened. I rang the police straight away and they have been 100 per cent in helping us.

“These men are horrible bullies. I would not like to see them again.

“What they have done is disgusting and they are still out there.

“I don’t want this to happen to anyone else.

“It is horrible and terrifying for Darren and for me to hear something like this happened to him.” 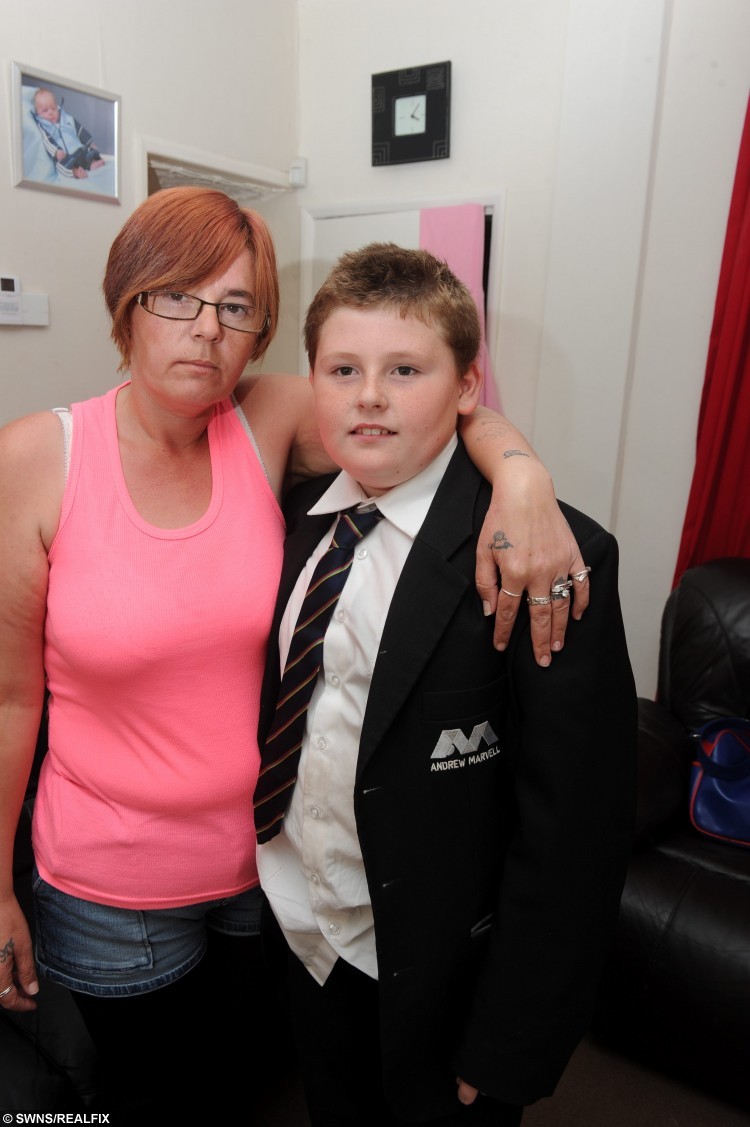 Miss Dagnall says Darren is now being escorted to and from the bus stop by a family friend, until he feels comfortable being on his own.

She said: “It shouldn’t have to come to this, but I don’t want him to be on his own after what has happened.

“I have his younger brother to take to school and have to drop him off so can’t take Darren to the bus stop myself, so a friend is helping out and making sure he is safe.”

Humberside Police confirmed they are investigating the robbery and are appealing for witnesses to come forward.

A force spokesman said: “Police are appealing for information following a robbery at the bus stop adjacent to Iceland on A165, Holderness Road, Hull at around 9.24am on September 25.

“An 11-year-old boy was at the bus stop when two unknown men approached him and one of the men allegedly threatened him before demanding money.

“Fearing for his safety the victim dropped money on the floor, before running away and the suspect walked off towards town centre.”

The man who threatened Darren is described as white, between 5ft 9in and 5ft 11in, with a beard.

He had short brown hair and a large nose.

He was wearing blue trousers, a white jacket with blue sleeves, a black Adidas tracksuit top and black and white trainers. There is no description of the other suspect.

Anyone with information should call Humberside Police on 101, quoting crime reference number 2140434.

Success for the ‘paedophile hunters’ as child sex offender is jailed

Teacher ‘stabs’ 10-year-old pupil with a pair of scissors

Teacher 'stabs' 10-year-old pupil with a pair of scissors