An angry nan was caught on CCTV battering a burglar in the street after she caught him raiding her home.

Margaret Allen discovered the heavily-built intruder coming down the stairs of her home and chucked him outside, before swinging a couple of massive punches at the much younger man.

The fuming 72-year-old bundled the thief out of her home before he managed to run away, with her jewellery spilling from his pockets.

CCTV from outside the house showed he had been in the house for 11 minutes, while her sick husband was still in the house.

On the day of the burglary Margaret had briefly gone out to pick up litter in the cemetery and left her door open. 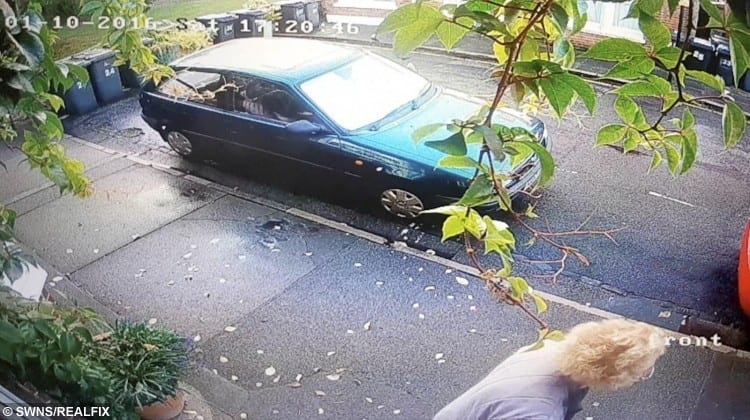 Her 81-year-old husband was in the house, but because of his illness was attached to a feeding tube in a separate room.

She said: “I heard a noise from upstairs and then suddenly this stranger appeared.

“I was angry more than scared and just wanted him out of my house.

“My husband Les is poorly at the moment so I just got hold of this chap and literally bundled him out of the door.

“I dialled 999 and was shouting out to neighbours for help.

“A few gave chase along with some people who had been in the cemetery, which backs onto our house.

“The last thing I saw was him running away with my jewellery falling out of his pockets.”

The burglary happened in Canterbury, Kent, at about 5pm on Saturday as Margaret returned home she noticed a bag containing cans of beer in her hallway.

Margaret, who was accommodation manager at Kent and Canterbury Hospital for 40 years, said: “When I came back in, I saw a carrier bag in the hallway which had ham, bars of chocolate and cans of lager in it.

“I thought ‘that’s odd’ because it was nothing to do with us. That’s when the burglar appeared.

“He was very well built and wearing a baseball cap and a hooded top, but didn’t have the hood up. He mumbled something and had a foreign accent. I also think he was drunk.

“When we checked our CCTV, it appeared he had been in the house for about 11 minutes, which is quite alarming.

“Afterwards, friends said I was lucky he didn’t have a knife because there was a bit of a tussle. But I didn’t think of that at the time and was more angry than frightened.”

Fortunately, among the stash dropped by the man as he fled was Margaret’s engagement ring, a 40th wedding anniversary ruby ring and her laptop.

But he did escape with several watches and a much-treasured silver charm bracelet.

Margaret added: “It’s of great sentimental value because the individual charms were bought by my husband over the years.

“They include a fish, a tortoise that opens to reveal a hare and a fly with a spider inside. I just hope that if it is offered for sale, someone might recognise it.”

Kent Police say that today (Fri) a 29-year-old man has been charged with burglary.

Jurijus Kuznecovas, of Canterbury, has been bailed to appear before Margate Magistrates Court on November 3.