A hapless thief fell on his bum while trying to steal a motorbike has been caught on film.

But the theft of the grey Suzuki DI650 was not as smooth as the pair would have hoped.

Footage shows one clumsy criminal while breaking off a wheel lock being knocked off balance, rolling over on to his backside with his legs flailing in the air.

He then pushes the bike out of the car park as his accomplice rode off on the moped in Tower Hamlets, east London,

The first suspect is a white male, who was wearing a black biker’s helmet, a dark blue jumper, light coloured jeans and black shoes. 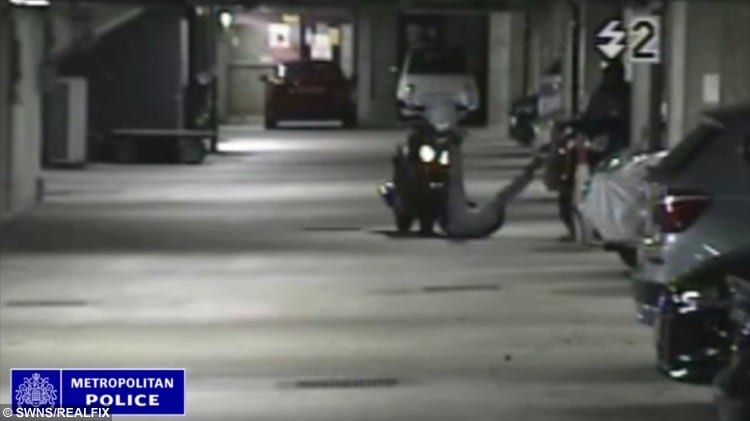 The second, also a white man, was wearing a black and grey helmet, a dark blue jumper and trousers and trainers.

The bike was stolen in Cinnabar Wharf Central on Wapping High Street on 10 September, but it was not reported to the police until 13 September.

PC Ryan Smith at Tower Hamlets CID, said: “We are keen to hear from anyone who may recognise those shown in the footage or the still released, or anyone who witnessed the theft.”