A pensioner was left with a dislocated shoulder after she was pushed to the ground and robbed by a cruel thief who lay in wait for her.

The 77-year-old woman had been out shopping when she was thrown to the floor down an alleyway and had her necklace stolen.

The cowardly attack, which took place in Crystal Palace, south east London, left the pensioner ‘frightened and in enormous pain’. 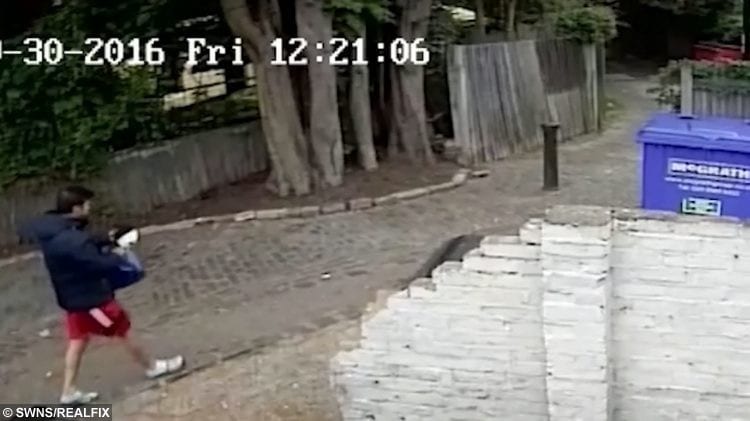 Police investigating the robbery have released CCTV footage in the hunt for the suspect after the vile robbery around 12:20pm on September 30.

The video showed the woman being approached by a man who lunged at her without warning, knocking her to the ground and then running off.

The force of the unexpected attack caused the victim to fall and land awkwardly, dislocating her shoulder, before members of the public rushed to help her.

About ten minutes after the attack, the woman was found by police and she told officers that the necklace she had been wearing was missing.

The victim was taken to a hospital in south London by the police, as there were no London Ambulance Service vehicles available, police said at the time.

The suspect is described by police as either a white or Asian male, aged 25-35 years old, wearing a blue jacket, red shorts with a distinctive white strip at the side, and white socks and flip flops.

PC Andrew Garland, from Croydon Police, added: “This was a cowardly attack on an elderly lady that left her frightened and in enormous pain.

“We are asking the public to help us find this man so we can bring him to justice.”