This amazing CCTV footage shows a boxer turned robber foiled as four female Boots workers batter him with a BIN LID – before detaining him until police arrive.

The women managed to overpower burly coach Michael Newton by wrestling with him and whacking him with the piece of plastic.

They refused to let the boxing coach get away after he attempted to rob a Boots pharmacy store.

The four ladies then ordered him to sit in a back room until police arrived at the store in Hull, east Yorks.

A judge has now praised the bravery of the manager and three colleagues.

He told them “If those four ladies don’t get Employee of the Month for September in Boots, it’s a poor do.”

Prior to the bungled robbery on September 30, Newton, who was once jailed for ten years, was a “reformed” character who gained coaching qualifications in prison.

He used to work at a boxing gym run by professional Hull boxer, Tommy Coyle.

Just last year, he rushed to the aid of a woman who was being attacked by two other women in the street.

After making a citizen’s arrest, he received a judge’s commendation and a High Sheriff’s award of £250.

But it was Newton was back in the dock at Hull Crown court on Monday, after a return to his heroin addiction led him back into crime for his “next fix”.

CCTV showed him going into the store just before 3pm.

Prosecutor Claire Holmes described how, when Newton walked behind the dispensary and made a grab for the till, the manager “instinctively wanted to stop him”.

She “shoved” Newton in the back and shouted “Oi, stop!”

As colleagues came to her aid in the ensuing struggle, she picked up a plastic lid and raised it above Newton’s head.

Miss Holmes said she “made a movement to hit him over the back of the head with it, but she didn’t. In fact, it was a deterrent manoeuvre”.

At one stage, Newton is seen desperately reaching for two bags of coins that fell on to the floor.

But they only contained £5 worth of 5p coins, and £1 worth of pennies, the court heard.

The manager then stood across the door to block Newton’s exit. She shouted for help, and a male passerby joined the effort, helping to guard the room Newton was ordered into.

Newton, from Hull, was arrested and later admitted robbery.

In a victim statement, the manager said: “You don’t ever expect this kind of thing to happen, do you, and it’s shaken up the whole team.”

Pharmacist at the store, Ru Ong, said: “The manager tried to stop him and they struggled back and forth, but she just would not allow him to get away.

“He was struggling and swinging his elbows, but we kept hold of his jacket so he would not get away.

“We just kept shouting to people outside but most people were too scared to help.

“Then one man came and stopped him and we managed to hold him inside till police came.” 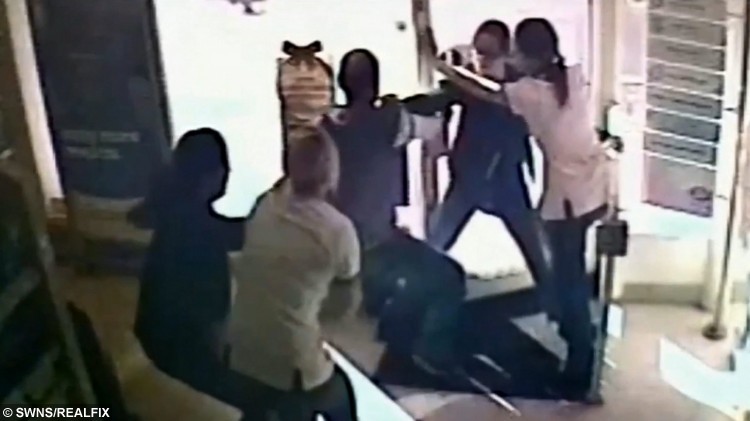 Since being jailed for ten years for aggravated burglary in 2002, Newton had worked alongside the Samaritans and coached boxing to steer young men away from crime.

Paul Norton, defending, told how Newton cared full-time for his partner, and had a part-time coaching contract with Pink Collar Ladies’ Boxing Club.

He said Newton had been taking the heroin substitute Subutex, but became “complacent” and suddenly stopped, leading him back into heroin use.

Judge Mark Bury sentenced Newton to 12 months in jail, suspended for 12 months, and ordered him to do 150 hours of unpaid work, and have 30 days’ rehabilitation.

He told him: “I’m going to give you the opportunity to show the courts, and those who know you, that this was an aberration and there will be no repetition, because if there is, you know what is going to happen.”

Mum slams hospital for abandoning her after suffering miscarriage