A hard-up father who couldn't afford an electric scooter for his children had the last laugh by pimping up their push bike - with his old cordless DRILL. See SWNS story SWDRILL: Aldis Kalnins (doub-corr), 42, was being bugged by sons Luka, 6, and Odmi, 8, for one of the latest £250 electric ride-on toys. But the creative father-of-three said they were too expenisve and simply swapped swapped their pedals for his old 12v drill - saving hundreds of pounds. The delighted kids now have a supercharged electric bicycle to whizz around on outside their home in Riga, Latvia.

A hard-up dad who couldn’t afford an electric scooter for his children had the last laugh by pimping up their push bike – with his old cordless DRILL.

Aldis Kalnins (doub-corr), 42, was being bugged by sons Luka, six, and Odmi, eight, for one of the latest £250 electric ride-on toys.

But the creative father-of-three said they were too expenisve and simply swapped the pedal arms for his old 12v drill.

He then connected a power cable to the handlebars – giving his kids a supercharged electric bicycle to whizz around on.

DIY fanatic Aldis, of Riga, Latvia, said: “Like other children my own kids want to get electric scooters, tablets, quads, drones etc.

“I cannot afford to fulfill all their wishes and what’s more, I’d like them to see that some things can be made by themselves and not just ideas on clipboards.

“I looked online but did not find any video where the bike pedals are replaced so literally, like I have done.

“My kids are happy and excited about the new ride, but every time the battery goes flat, they have to return to their normal pedal bikes.

“The scooter is safe, because it doesn’t go too fast, but just enough to please the children.”

Aldis – who operates science museums and exhibitions in Latvia – created the machine in a single day by firstly removed the pedal arms.

He then fixed the cordless drill on one side with a large metal rod instead of a drill bit which is attacked to the crank.

This drives the chain cog on the other side, which in turn powers the wheels.

Aldis replaced one brake lever with a cable running to the drill. The children operate the motor by pulling the brake lever.

He finished the design by bolting on a piece of metal for his children to put their feet on while they power around. 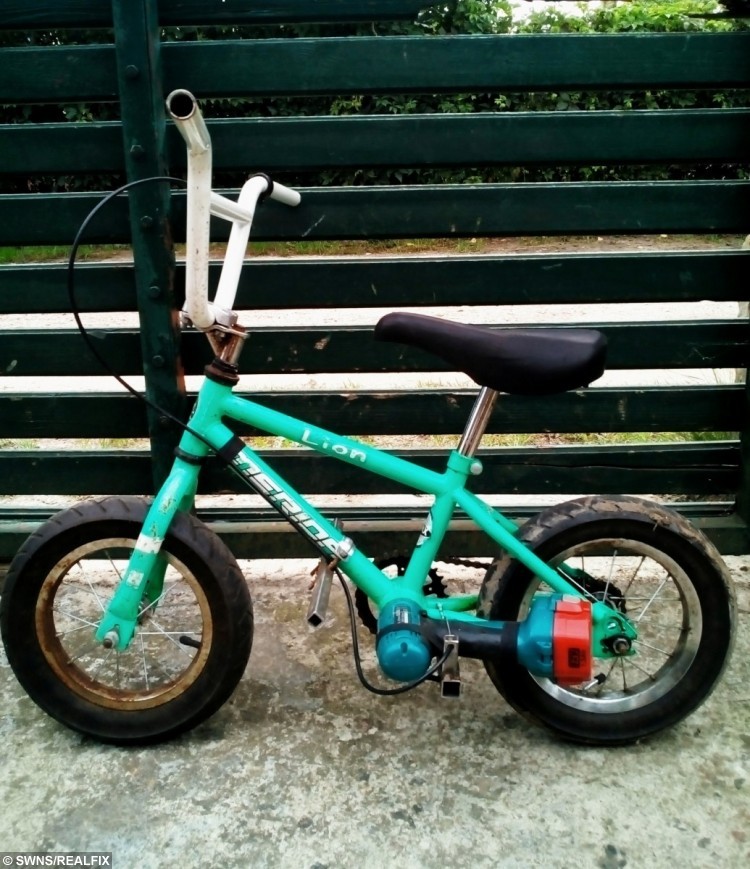 The kids can ride about 500 metres on the bike before the battery dies and they have to spend 10 minutes recharging it.

But Aldis said a new drill with the same 12v 13Ah battery would last for twice as long and give them extra turbo.

Aldis, who has another daughter Helen, 13, added: ‘I wanted to make this scooter as quickly as possible and it took less than a day. It’s too small for Helen though.

‘For me it was important that this transformation work do not include turning and welded parts, because it would be too complicated.

‘Therefore, I stuck to the principle ”Use everything at hand and do not look for anything else”.’ 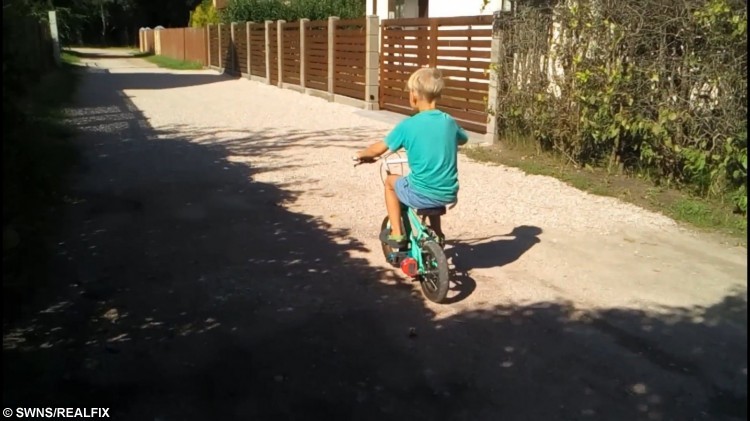 Aldis is currently working on a new interactive exhibition in Latvia called ‘Wonders / social physics for kids’ which looks at science in everyday life.

He details his inventions on his blog wondersbook.wordpress.com.

Man bit into piece of metal hidden in Lidl dessert

Man bit into piece of metal hidden in Lidl dessert