A six-year-old schoolgirl is causing a sensation in the normally staid world of chess – by beating adult competition to land two major titles in just a month.

Little Carolina Espinosa Cancino, who has been playing since she was two, likes nothing more than singing along to her favourite musical, Annie, or humming the ‘Let It Go’ soundtrack to Disney film Frozen.

But when the chess board comes out she switches into junior master mode, leaving opponents more than three times her age trailing in her wake.

She played for five gruelling hours before taking the title. Then, last week, she scooped another junior title at a championships held in Croy, Lanarkshire., beating adult players.

Carolina comes from a long line of chess champions and was taught by her father, entrepreneur Jose Miguel Espinosa.

She is following in the footsteps of her older siblings, Miguel, 20, Cristina, 19, and Monica, 15, who are all already international chess players.

“Carolina knows that chess is a game of strategy that requires concentration of attention, memory, creativity, imagination, sense of responsibility and emotional-control.

“Carolina knows that talent is 10 percent of the base and the remaining 90 percent is work.”

As well as her musicals, Carolina enjoys drawing and colouring in like most little girls her age and is busy learning her times tables.

But in between that she practices her chess for two hours every day during the week.

And despite her remarkable work ethic she is shy and modest.

Carolina said: “I like chess because I can learn from my dad. When I’m playing I concentrate very hard and have to be serious. But when I’m winning I get really excited.

“I don’t feel bad when I lose because I just tell myself I’ll try harder next time and beat the next person.

“I play my brother and sisters all the time but they never let me win. We have to play properly or else it would be cheating.

“I don’t talk to my friends much about chess but one of my friends said she saw my picture with my trophies so that was exciting.”

Proud dad Jose, 53, said: “Carolina is only six years old so she’s just in the beginning of her chess career.

“She has the passion for chess, it’s just a matter of progressing little by little.

“It will be a long, hard journey to become grand master but she is very talented.”

Next week Carolina will compete for the Scottish Girls Championship for girls aged 18 and under.

The competition is split into three categories – primary five and below, primary five to seven and secondary school.

Carolina is expected to compete at the primary five to seven level.

Jose said: “To me the trophies don’t matter. Carolina’s experience with tough opponents is the most important part.

“Difficult competitions like this will help her to become a stronger chess player.” 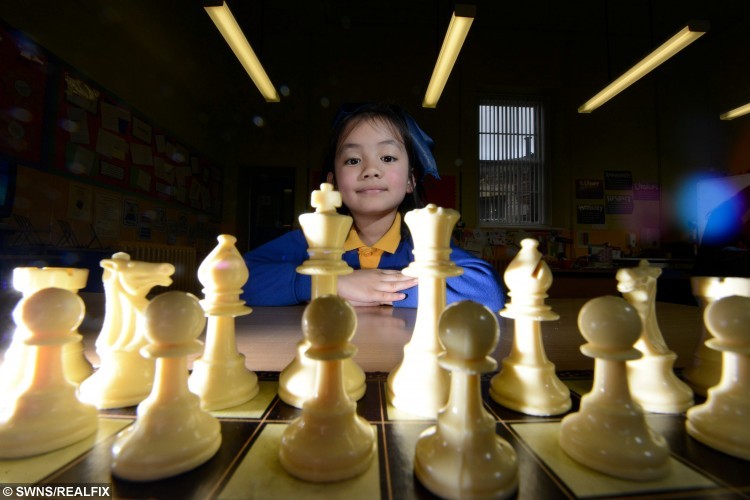 The family moved to Scotland in 2010 from Spain, where Carolina’s parents ran a marketing and advertising business.

They had a holiday house in Girvan since 2005 and decided five years later to live here full-time — despite the miserable Scottish weather.

Ardent believers in the power of language, they moved to be closer to relatives in Glasgow and to give their children a bilingual upbringing.
ENDS

Bird and deer are best of Im-pal-as