Could doing THIS to dolls allow children to grow up happier?

A woman is doing a booming trade in re-branding childrenÃs dolls Ã and specialises in de-sexualising the toys to make them look more acceptable for children. See SWNS story SWDOLL: Bee Hale, 46, alters the dolls by re-clothing them, changing their body shape and removing any image of makeup, in the hope of sending out a message to doll manufacturers worldwide. She also makes specialist dolls for children with illnesses such as cancer, and will make up dolls to look like they are undergoing chemo therapy. She also works on boys dolls, and decreases prominent jaw lines and chisels off six-packs to make them seem more realistic.

A woman has launched a business selling plain looking dolls after deciding Barbie and Ken were too SEXY for children.

Bee Hale, 46, says she is already doing a booming trade by de-sexualising the popular girl’s dolls by re-clothing them, changing their body shape and removing any trace of make-up.

And she has now also turned her attention to the boy’s by decreasing any prominent jaw lines and chiselling away at any impressive six-pack.

Bee, of Redruth, Cornwall, is hoping the success of her “realistic” doll business will send out a message to manufacturers worldwide.

The hairdresser began her mission after she found she could never relate to “unrealistic” toy dolls.

She said: “It’s not just for girls, it’s for all children.

“We are also trying to de-sexualise these overly made up dolls, to make them more acceptable for children to play with.”

“We are just trying to make children feel more at ease with what they are going through.

“We do boy dolls as well, because we think that is very important. We make boy dolls to resemble the more effeminate boys. We sand down the jaw line, take the six-pack off, make them more boy-like.”

Bee says that since she was a little girl herself, she could never relate to her dolls so would end up making her own using plasticine or clay.

She said: “I wonder if I had a more realistically shaped doll when I was a young girl, whether I still would have grown up with a low impression of my body shape, which made me yo-yo diet all my life.

“I make dolls more acceptable for children and ensure that they send the right message to girls that you don’t have to look like the manufacturers say you do.”

The dolls are all sourced second hand, from car-boot sales and charity shops, before they are totally renewed and recycled under the moniker Rescued Dolls.

Bee says she starts her alterations by wiping off the original face using acetone, before repainting them with watercolour pencils and acrylic paint and then seals them with non-toxic varnish.

She then adds detachable shoes, hand-made clothes, and special adornments such as hearing aids depending on the specification.

The dolls sell for between £25 and £40, and Bee donates most of the profits to charities such as Children in Need.

She said: “The dolls are found in charity shops, car-boots, and things like that, then I take them home and wash them and clean the hair up.

“Then I take the faces off, and repaint them, and give them bespoke handmade clothing.”

Bee also makes specialist dolls for children with illnesses such as cancer, and has also made up dolls to look like they are undergoing chemotherapy.

She said: “I also do commissions, so people send me photos, then I make a portrait of them on the blank canvas of the doll.

“I make dolls with birth marks or hearing aids, if requested, so that children can relate to them.

“It makes the children feel a bit more at one with themselves, and accepting of their own individual marks.

“We make them with no hair for children with cancer, and for children going through chemo, that sort of thing.

“I present dolls with imperfections so that children can see that that is ok.” 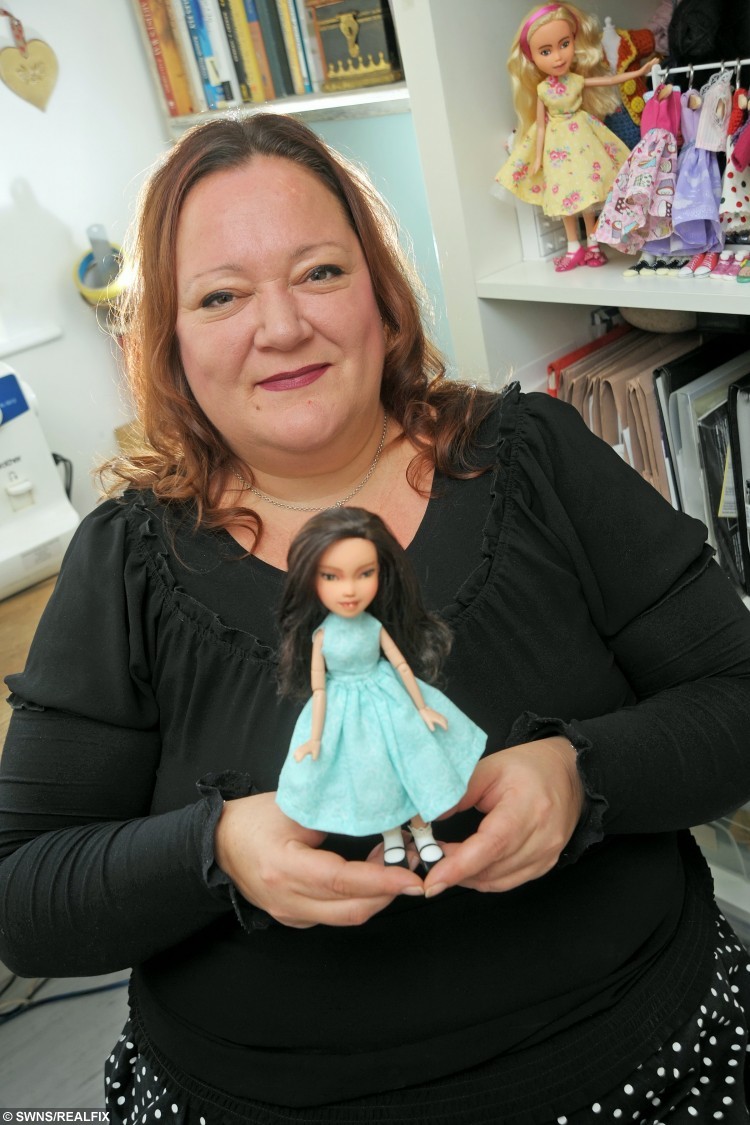