Robert Young, 26, with some fish fingers bought from Iceland, pictured at her home in Pontefract, West Yorkshire, on 25 August 2015. Earlier this year Robert Young was shocked when he found a piece of cardboard in some fish fingers he had bought, from Iceland, for his daughter Ellie-Jay. See Ross Parry Copy. RPYFISHFINGER: A man has vowed never to eat fish again after his daughter almost choked to death on a piece of cardboard he found inside a FISH FINGER. Robert Young, 26, said he had just served up Ellie-Jay, six, a teatime favourite of Iceland own brand fish fingers, chips and beans, when the youngster began to choke. Robert said: ÃI had just made Ellie-Jay her tea and made a fish finger sandwich for myself when she began choking. ÃShe just panicked, this piece of cardboard was stuck in her throat. I had to put my fingers down her throat and pull the cardboard out.

A dad says his daughter almost choked to death in front of him when a stray piece of cardboard got into her fish fingers.

Robert Young had just served up Ellie-Jay’s teatime favourite from his local Iceland supermarket with chips and beans when the six-year-old began to choke.

He acted quickly and reached into her throat to pull out the four-inch long piece stiff cardboard which was the size of one of the fish fingers.

Suppliers Youngs have admitted the stray piece came from the production process and have apologised and vowed to tighten up their safety procedures.

Robert, 26, said: “I had just made Ellie-Jay her tea and made a fish finger sandwich for myself when she began choking.

“She just panicked, this piece of cardboard was stuck in her throat. I had to put my fingers down her throat and pull the cardboard out.

“It was massive. It was the full size of the fish finger. It looked to me like a piece of A-Tex roofing you see on a house. It was a long as a permanent marker.

“It was horrible. I’ve never experienced anything in my life like it.”

Robert, who tragically lost another daughter, Emily Fay, when she was born prematurely just 27 weeks into his partner Rhian Harris’ pregnancy, said he feared the worst.

He added: “We had already lost Emily Fay and I didn’t want to lose another child.

“It panicked me as it. It was one the hardest things that has happened in my life and I didn’t want to go through it again.”

Dad-of-two Robert paid £2 for the 40-pack of fish fingers and contacted Iceland straight away.

They told him to contact Grimsby-based fish giant Young’s who supplied the fish fingers.

Young’s admitted that the cardboard had got into the food during the manufacturing process – and offered him just £10 compensation.

In a letter to Robert, Youngs wrote: “This matter has been taken very seriously and brought to the attention of the Quality Manager and Production Manager.

“He in turn will be re-brieﬁng all personnel involved, on the importance of sustained visual inspection throughout processing to prevent a recurrence of this matter.

“On behalf of Young’s Seafoods, I wish to apologise for any distress caused by this incident and assure you that this is not typical of our products.

“We are acutely aware of our responsibilities to our customers and endeavour to produce a high quality product at all times.” 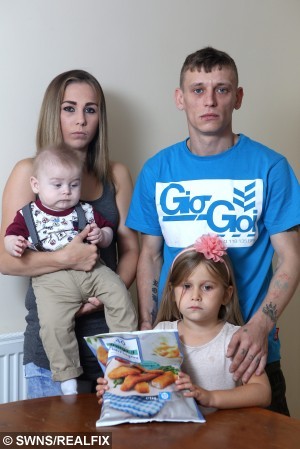 Robert said: “It wasn’t the money that I wanted. It was an apology for my little girl and it was me that got the apology. I thought that was disgusting.

“I did explain to them on the phone what had happened but they didn’t seem to give a monkey’s. It’s not like that, it’s somebody’s life and they’ve just fobbed me off.

He said the episode his daughter much more cautious when it comes to food.

Robert, from Pontefract, West Yorks., said: “She will never eat fish fingers again as long as she lives and I won’t even eat fish from the chip shop anymore.”

He added: “We used to spend #200-300 a month in Iceland but since this incident we now do our shopping at Tesco or Asda and have never had a problem with them.

“I know it’s not Iceland’s fault but something could happen again and one of us could end up really poorly.”

Young’s Seafood said: “We investigated the issue and found that the material he found in his fish fingers was a piece of block liner – the cardboard liner that frozen fish blocks are packaged in during transportation, before they are made into fish fingers.

“We immediately alerted the manufacturing team to this issue and they have since made improvements to our block stripping processes, moving from a mechanical process to a manual process, to ensure greater consistency and quality control.

“We wrote to apologise to the consumer, in April, offering a Postal Order reimbursement and gesture of our concern and goodwill.

“We are grateful to the consumer for bringing this issue to our attention and would like to reassure him that our factories operate to the highest standards and that we constantly work to improve our manufacturing processes.”

Hate spiders? Then you might want to know where this was found…

Hate spiders? Then you might want to know where this was found...