A former Land Girl and great-gran-of-four has been hailed as Britain’s oldest ZUMBA dancer – AGED 90.

Nimble Dorrie Pack, 90, took up the craze three years ago after she lost her husband of 62 years, Royal Navy sailor Ken Pack.

She now dons brightly-coloured gym gear and attends four 60-minute sessions every month, strutting her stuff to chart-toppers alongside women in their 30s and 40s.

As well as keeping her in shape, Dorrie, a former line dancer who taught yoga for 30 years, says Zumba keeps her social calendar full.

The smiley supergran had a 90th birthday party with her class earlier this month and the ladies dine together and go for cream teas.

Dorrie, of Sidmouth, Devon, said: “I spent a lot of time looking after my husband and he died six years ago, but I have still kept doing all the things I wanted to do.

“Then three years ago I saw an advert for Zumba in the paper and it said, ‘Go along, the first one is free.’

“I have hardly missed a lesson since. I can’t describe it, I just love it so much – the movement to the music and the teacher is absolutely wonderful.

“We go in and she starts off with a warm up with five or six different directions and we gradually build up and get busier and busier.

“Then we slow down and the last two are very relaxed. The last one is deep breathing.

“We do the routines to beautiful music, well-known pop songs, and it’s all on your feet. There is no sitting down doing it – you’re up and dancing to the music.

“It’s a very happy class, we never stop smiling. Afterwards I feel fantastic. I don’t come away feeling tired, I am invigorated. It is a wonderful thing.”

Dorrie spent three years in the Women’s Land Army joining during World War Two in 1943 at the age of 16.

The nonagenarian married her childhood sweetheart Ken, who she met at primary school aged 10, in 1948.

While she worked in the fields, he was conscripted into the Royal Navy where he served as a signalman before working as an engineer for a steel company.

Dorrie, who went on to become a personal assistant, also took up line dancing for eight years and taught yoga in her fifties.

Now the fitness fanatic focuses her energy on Zumba – as well as attending a church group, film club and the opera and tending to her garden.

Dorrie said: “As a Land Girl we did all sorts of different things – picking carrots and sugar beans, ploughing and working with the animals.

“We were out at 6am and back in at 6pm. It was very physical but it was a wonderful time.

“I have stayed active and always kept fit. It just me – I love dancing and anything to do with music and I love walking.

“I never feel tired in the Zumba classes. We do lots of steps and there are certain bits where we make noises and throw our hands in the air and shout ‘wooh ooh’.

“We don’t have five minutes for a break. We just have time to nip to the side to have a sip of water and then we’re back at it again.

“I’m so lucky that I don’t find it hard. I find it very easy, but you do have to follow the steps.

“I am always at the front in the middle and everybody knows that’s my place. If I’m too far back I don’t quite see the instructor.”

She added: “I I am the oldest in the class by quite a way. I don’t know of anyone even in their eighties, though there are a few ladies in their seventies.

“There are young people there, in their forties and fifties. All I know without bragging is that people don’t believe I’m 90.

“You think three scores and ten then out you go, but I feel much younger. It’s only a number. 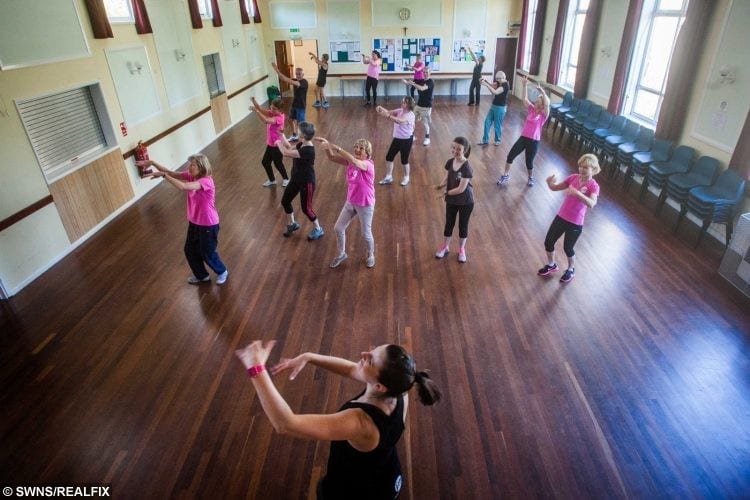 Dorrie’s instructor Johanna added: “Dorrie doesn’t give herself enough credit. She doesn’t seem to realise how brilliant she is.

“She is incredibly fit and healthy and well and she looks after herself. Her enthusiasm and determination are a great inspiration to us all.”