FILE PICTURE Tim (45), and Kerry (39) Meek with their daughters Amy (11), and Ella (9), with their caravan they plan to use to travel around the UK to educate their daughters on the road, after having become disappointed in the English education system and removing them from school. 3 September, 2014. A teacher couple so fed up with Britain's education system they took their children out of school and on a Ã20,000 year-long educational tour of the UK have planned their next trip - around EUROPE. See NTI story NTITEACH; Tim, 46, and Kerry Meek, 40, quit their jobs and sold their #160,000 house last summer to fund their 13,000 mile caravan journey with daughters Amy, 12 and Ella, 10, last September. The girls traded classrooms for trips to castles, museums and beaches in their 12-month "ed-venture" which took them all over Britain. Their parents planned to return to home to Nottingham this year and were going to send their daughters back to school. But their trip was such a success they are now repeating the experience on the continent this year and taking the girls across Europe in their new motor home.

A teacher couple so fed up with Britain’s education system they took their children out of school and on a £20,000 year-long educational tour of the UK have planned their next trip – around EUROPE.

The girls traded classrooms for trips to castles, museums and beaches in their 12-month “ed-venture” which took them all over Britain.

Their parents planned to return to home to Nottingham this year and were going to send their daughters back to school.

But their trip was such a success they are now repeating the experience on the continent this year and taking the girls across Europe in their new motor home.

The couple, who have already spent this summer talking at literary festivals, hopes the 12-month trip will help their daughters improve their French and learn about the Second World War.

Speaking from their motor home, currently in Leicester, dad Tim says: “We never intended to do this for another year.

“But about six months in we started to think about relocating back to Nottingham because it would require a lot of preparation.

“As we talked about it we all thought ‘do we have to stop?’ and it was quite an easy decision really because we were all enjoying it so much.

“We’re still a bit vague on the plans, but we have bought a motor home so we can go much further.

“Before Christmas we want to go to Scotland to wild camp and to the Netherlands to learn a different approach to education.”

“In Scotland the kids can learn more about nature by being immersed in it for seven weeks.

“Then we’re going to the Netherlands and Scandinavia because as a nation we’re much more materialistic than them.

“They start school much later, have a more informal approach to learning, with more time spent outdoor, and are generally much happier nations.

“It’s not unknown over here that outdoor education is valuable, but data on kids’ test scores is valued more so teachers spend too long marking and not enough time planning lessons.”

“We’re going to go through Germany on the way back and we also want to do a big trip into France to learn about the Second World War and to improve our French on the way.

“Ella absolutely loves her languages so we think she’ll really enjoy this part of the year.

“We’d also love to go over to Ireland and Northern Ireland as we never made it over last year and the girls are fascinated with their history.”

Last year the intrepid family travelled from Nottingham up to the Scottish borders, back down to Longdon and across Norfolk.

They visited a dormant volcano in Scotland, gave sand yachting a go in Norfolk and visited Bletchley Park, the home of the Second World War codebreakers.

Reflecting on their daily routine, Tim said: “Every morning we get up as early as we can and do a gratuity reflection over breakfast, where we comment on things we’re thankful for the day before.

“Then we do maths at 9am before going out and learning the other subjects through visits to museums, or beaches to learn about erosion, for example.

“The kids write reviews of places we’ve been to on Trip Advisor to improve their writing and Amy is writing a novel about her travels at the moment.”

Tim and Kerry, who were both teachers for ten years, say they have no criticisms of staff at Richard Bonington Primary School in Arnold, Notts., where their daughters attended and Kerry taught.

They said the decision was more to do with a controversial new National Curriculum which was introduced last year.

Tim, who quit his job at Derrymount Special School in Arnold, added: “Children are not sausages in a sausage factory to be pumped full of facts and content ready for regurgitation at the end of some arbitrary Key Stage, when they take high-stakes assessments.

“Education is becoming overly dominated with tests, assessments and targets, at the expense of rich, engaging and enjoyable learning.

“It is all about targets and keeping Ofsted off your back and not about what is best for the children.

“It is not the fault of the teachers or heads. There is too much pressure on performance-related achievement and league tables.”

“Learning should be fun and engaging and that’s why we have done this, to reinvigorate their appetites for learning by giving them a different experience.

“That way they are devising their curriculum and influencing the direction of their learning.

“People who have seen Amy and Ella since we’ve been travelling have said how much more mature they are.

“I think before they were achieving, but now they are really flourishing.”

“We do a lot of festivals, and the girls now write their own material and speak to huge audiences, taking questions at the end.

“Although they miss aspects of school, like the bunsen burners in science classes, I think this whole experience has developed them in different ways that will put them ahead of the class in certain aspects.

“They keep in contact with their friends on Skype and we spent the whole of the summer in Nottingham, so I don’t think they’ve missed out on spending time with their school friends too much.

“You never know what will happen and I’d never rule anything out, but at this stage I think it will be right for us to return to school next year.” 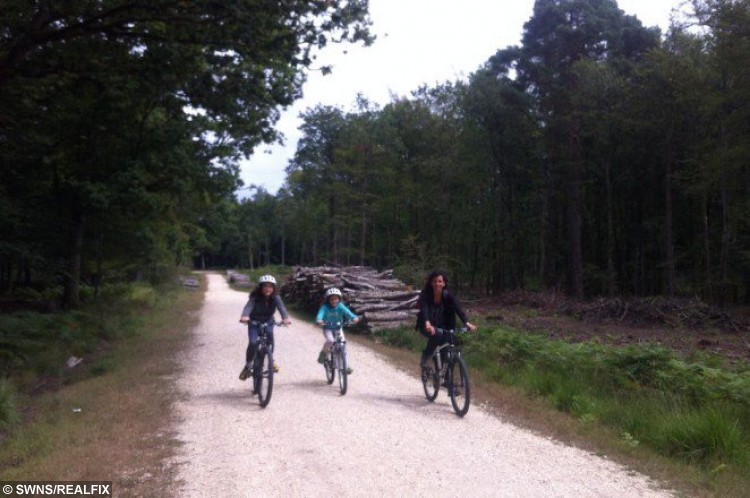 Heartwarming: Photographer captures the beauty of animals dealing with disabilities