Eileen Rooney with daughter Kaitlyn Branchfield, aged five from Greenock, Inverclyde, who has a rare metabolic illness that means eating a chicken nugget could send her into a coma. MAY 03 2016 . See Centre Press story CPKID; A five-year-old girl has such a rare metabolic disorder that she could slip into a coma just by eating a single chicken nugget. Little Kaitlyn Branchfield was diagnosed with ornithine transcarbamylase (OTC) deficiency when she was just 15 months old — a condition that affects just one in every 80,000 people. The genetic illness means the five-year-old’s body is unable to get rid of harmful ammonia, which if allowed to build up will start to attack her brain and vital organs – and could cause irreparable damage.

Kaitlyn Branchfield was diagnosed with ornithine transcarbamylase (OTC) deficiency when she was just 15 months old – a condition that affects just one in every 80,000 people.

The genetic illness means her body is unable to get rid of harmful ammonia, which if allowed to build up, will start to attack her brain and vital organs and could cause irreparable damage.

Kaitlyn’s mum Eileen said : “Kaitlyn will never be able to have a steak, chicken or anything like that. Any meats or anything that’s high in protein in general. She can’t have a roast dinner.

“You have to look at everything you buy as it has your protein allowance on it.

“If we go to the likes of McDonald’s or if we feel like going out for a meal I have to take my scales and bowl and weigh things.

“She can’t eat a chicken nugget. The only thing she can get is a small portion of French fries which is about three grams of protein.”

OTC deficiency is largely produced during the breakdown of food and as a result Kaitlyn is on a strict diet and can consume no more than five grams of it a day.

It means that as little as a single chicken nugget or a small yoghurt could push her over the limit and lead to lethargy, vomiting and even push her into a coma.

Eileen, 30, said: “She’s right into baked potato and tuna right now, but again I have to use my scales.

“We can’t order from a menu for her. I phone before we go anywhere and explain that my daughter has a disorder.

“If she gets too much protein or she doesn’t get enough medicine she gets lethargic and the ammonia will attack her body. 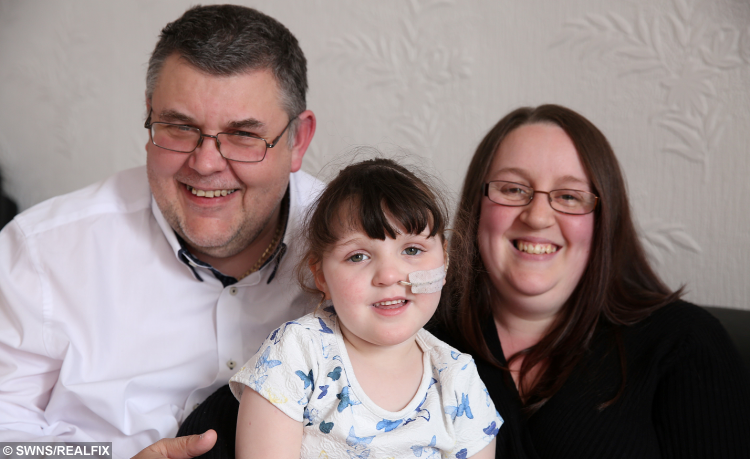 “She would have to go into hospital and would get a very high dose of intravenous medicine into her veins to flush the ammonia out as much as possible. Then it’s a case of hoping it hasn’t done too much damage.

“You really don’t want it to get too that stage.”

Kaitlyn receives specialist medicine four times a day just to allow her to consume any protein at all – which is vital for the body to build and repair.

She also gets a food supplement to ensure she receives all the vitamins and minerals she needs.

Both are administered via a tube through her nose, but the youngster will soon have a procedure which will see a ‘peg’, or button, put in her stomach to make the medicating process easier.

Kaitlyn has to have blood samples taken every three months and her diet and medication is adjusted accordingly.

Eileen said: “The best way to describe it is it’s similar to diabetes in that it’s metabolic and where diabetics can’t take too much sugar but Kaitlyn can’t have too much protein because it produces ammonia.”

The youngster, who lives in Greenock, Inverclyde, with her mum, dad Alan, 29, and one-year-old twin brothers John and Connor, also has a form of autism after suffering brain damage when she was little more than a year old, prior to being diagnosed with OTC.

At one point her parents were told that she might not survive after being put in a medically-induced coma, and even if she did come through it she might be left in a ‘vegetative state’.

But Kaitlyn has made a miraculous recovery, goes to nursery every morning and will start at primary school after the summer.

Rob said: “They are always striving for funding and the money goes straight to the unit.”