This is the hilarious moment a posh OAP enjoying afternoon tea told a bystander to move out the way – so she could get a better look at some NAKED bikers.

The video shows the elderly lady sat in the window of Betty’s tearoom in York telling a man stood against the window to move so she could gander at the naked group.

It was captured during York’s annual naked bike ride as the participants dismounted in St Helen’s Square and held a minutes silence for the people who died in traffic accidents.

But a silver-haired woman donning a chequered green shirt couldn’t see the activity due to the positioning of one of the marshals.

She tapped on the window as her presumed husband chowed down on some soup.

After the man moved, the woman, who has not yet been identified, stuck her thumb up at him – before going back to admiring the bizarre views.

However, not everyone was keen to watch the peloton of bare flesh as it whizzed around the historic city on Saturday (June 24). 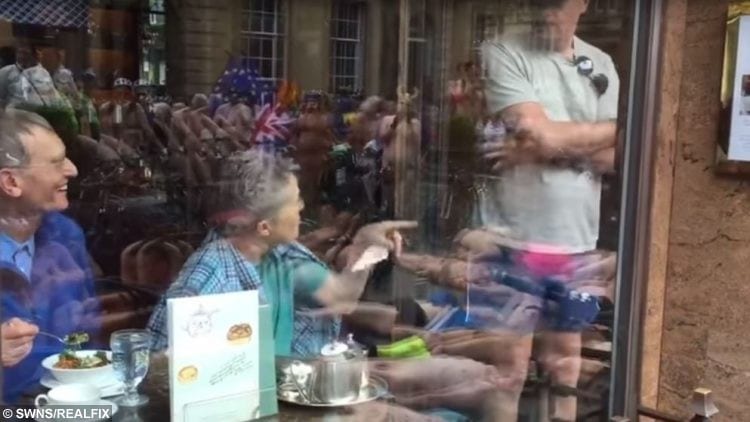 One Facebook user wrote: “It’s disgusting and an excuse for these people to abuse the situation. I’d have called the police if I thought they would intervene.

“By you promoting this you are actively encouraging this blatant abuse of the purpose of this event. Shame on you.”

But North Yorkshire Police say the law surrounding exposure applies only if there is an intention of causing alarm or distress.

The force is satisfied that this wasn’t the intention of the people who participated in this organised event.