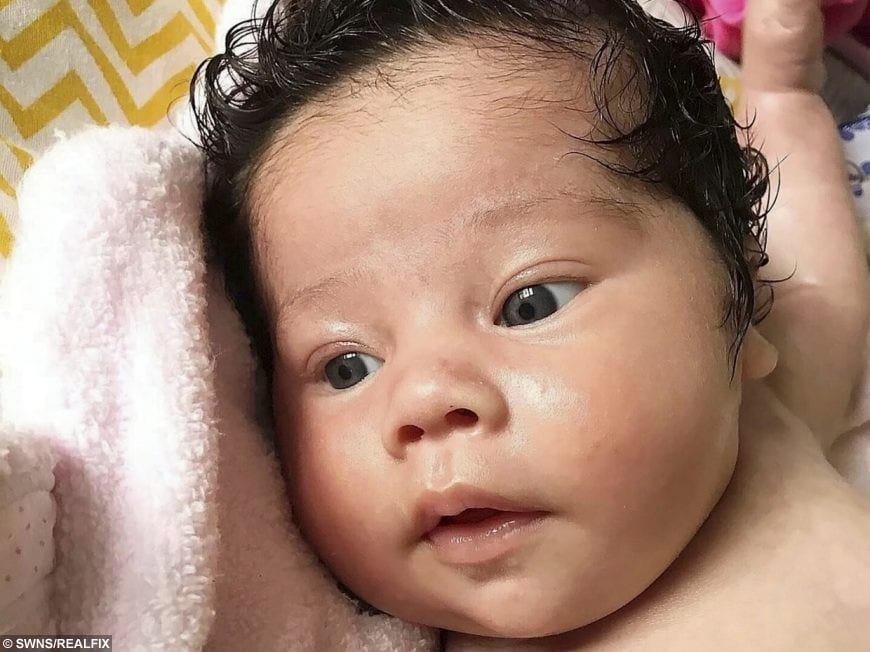 Newborn Tia Robinson stunned midwives and her own mum when
came into the world – sporting a marvellous head of thick black hair.

Proud mum Georgia Robinson, 22, couldn’t believe her eyes when little Tia was delivered weighing 9lbs on June 18 with hair all over her head.

According to the mum-of-two, midwives at Burnley General Hospital, Lancs., said they had never seen a newborn like her.

Now, less than a month later, Tia’s rapidly growing hair has already gone over her tiny ears – and Georgia has no intention of cutting it anytime soon.

A brilliant selection of photos show the baby’s luscious locks, including one of her alongside four generations of her family.

Georgia, who worked in operations before falling pregnant, said: “I couldn’t believe it when I saw her, there was so much hair, I really wasn’t expecting it.

“The midwives were as shocked as me, they were saying they had never seen anything like it.

“My friends and family are all absolutely obsessed with her and the hair is the first thing everybody talks about.

“It’s growing really quickly and we’ve had to start putting clips in already.

“She loves having her hair brushed and washed as well.”

Georgia and her partner Bradley Duffy have a two-and-a-half-year-old, Ellis, but he didn’t have half as much hair when he was born.

They added Tia’s colour is a bit of a mystery, as none of them have hair as dark as hers.

She said: “Everyone loves Tia so much.

Her brother Ellis loves her and is always giving her lots of hugs and kisses, which is great.

“I have posted pictures of her on Facebook and everyone loves her, she’s getting loads of likes.

“Even when we’re out shopping people stop us to say hello to Tia.

According to an old wives’ tale the amount of heartburn a woman suffers during pregnancy correlates to the amount of hair on their newborn’s head, although Georgia says she didn’t have any over the past nine months.

Instead experts say the amount of hair a baby is born with is actually influenced by genetics and ethnicity.

However, a baby’s hair as a newborn bears little resemblance of what he or she will look like as they grow older.

Some infant’s lose their hair just a few weeks after being born due to hormonal fluctuations.

Inside the womb, the infant is exposed to high levels of hormones from their mother, which drop when the baby is born.

« Previous post 'Body Armour May Have Saved My Life': Police Officer Has Told How She Caught Her Breast Cancer Early - Thanks To Her Body ARMOUR
Next article » Baby Who Contracted Brother's Chicken Pox Nearly Died After Serious Infection Led To A Flesh-Eating Disease To Feed On His Lungs