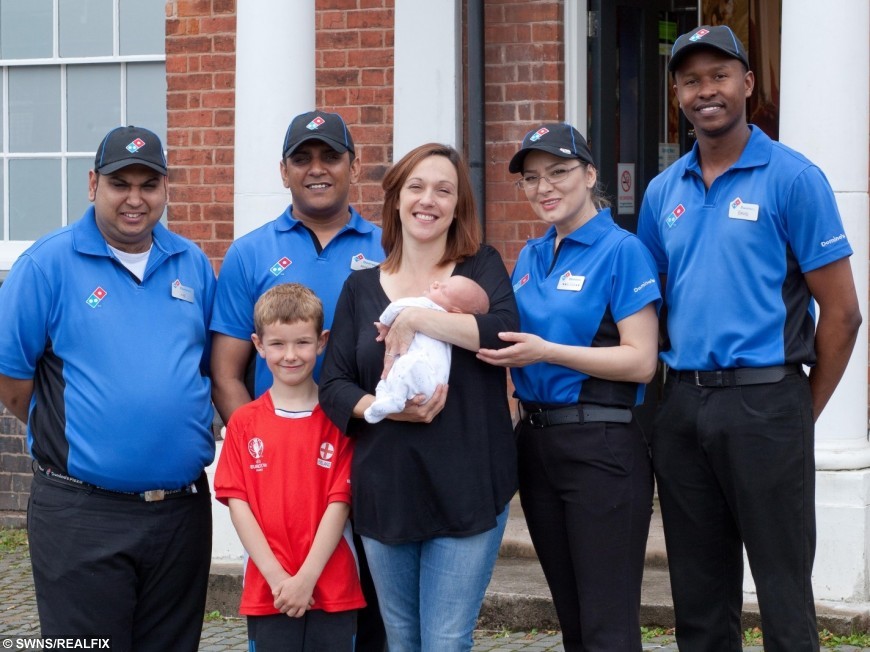 Staff at a Domino’s pizza takeaway made the ultimate delivery – when they helped a woman customer give BIRTH to a baby boy.

Matthew Maltby-Russell, 35, was rushing partner Gemma Grainger, 35, to hospital when they were forced to pull over when she had an overwhelming urge to push.

After stopping up in the car park, air conditioning engineer Matthew dialled 999 while five members of staff rushed over to help Gemma have a safe delivery.

Little Noel was born outside the pizza outlet in Tamworth, Staffs., weighing 5lbs 9oz at 8.20pm on June 13. 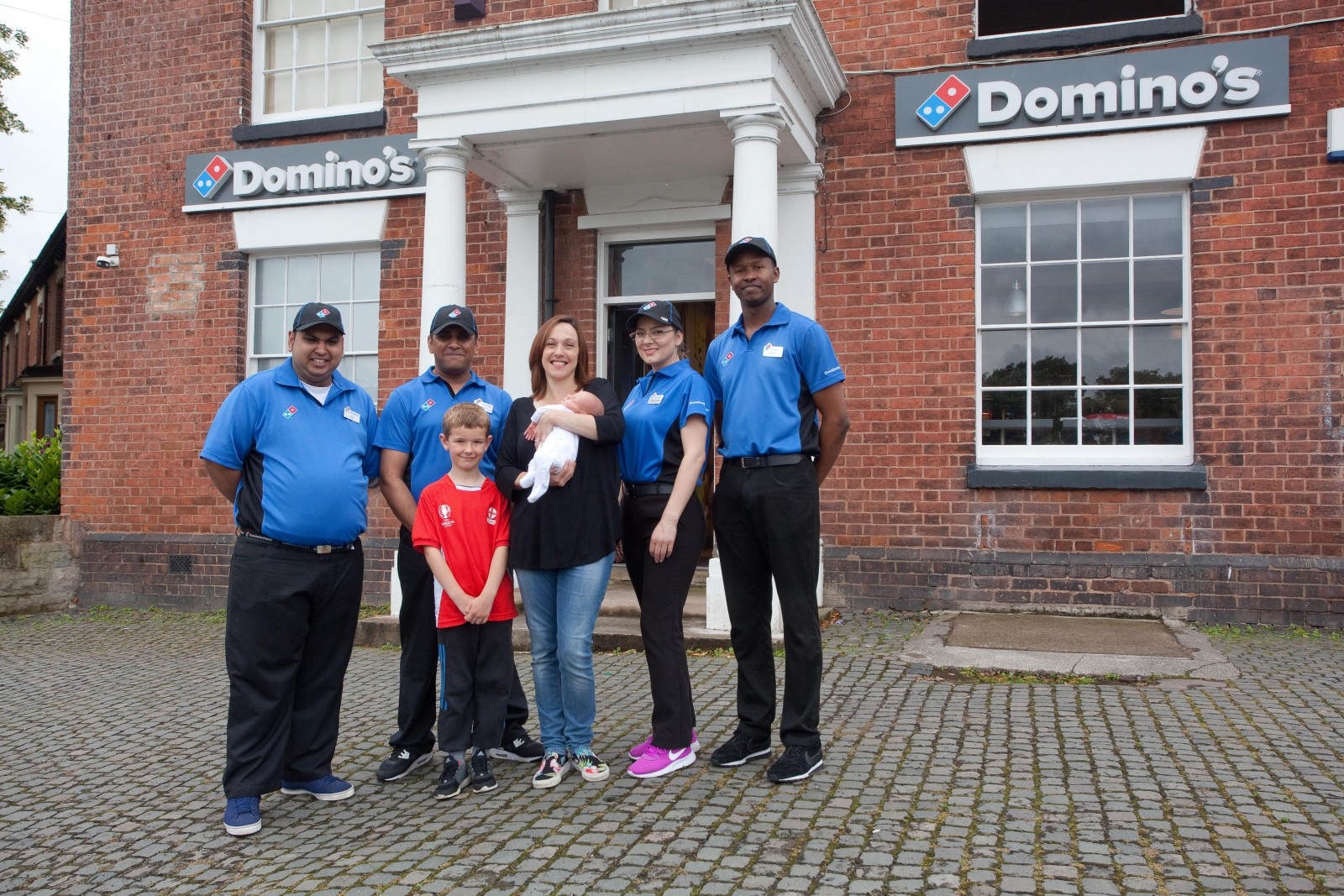 Gemma Grainger (35) from Birchmoor, Tamworth, with baby Noel outside the Domino’s where he was born

An ambulance arrived five minutes later and took mum and baby to Queen’s Hospital in Burton-on-Trent, Staffs., for a check-up, before discharging them the next morning.

Marketing worker Gemma, of Tamworth, Staffs., said: “Matthew was driving and I had only had a few little pains, so I thought I would be alright.

“But in ten minutes that pain had become unbearable and I looked down and saw I had Noel’s feet hanging out of me and I had an urge to push.

“We were near town and I knew that Domino’s has a large car park because we go there quite often.

“We pulled over in the car park and my six-year-old, George, was crying as I was lay in the backseat and Matthew was running around outside dialling 999. 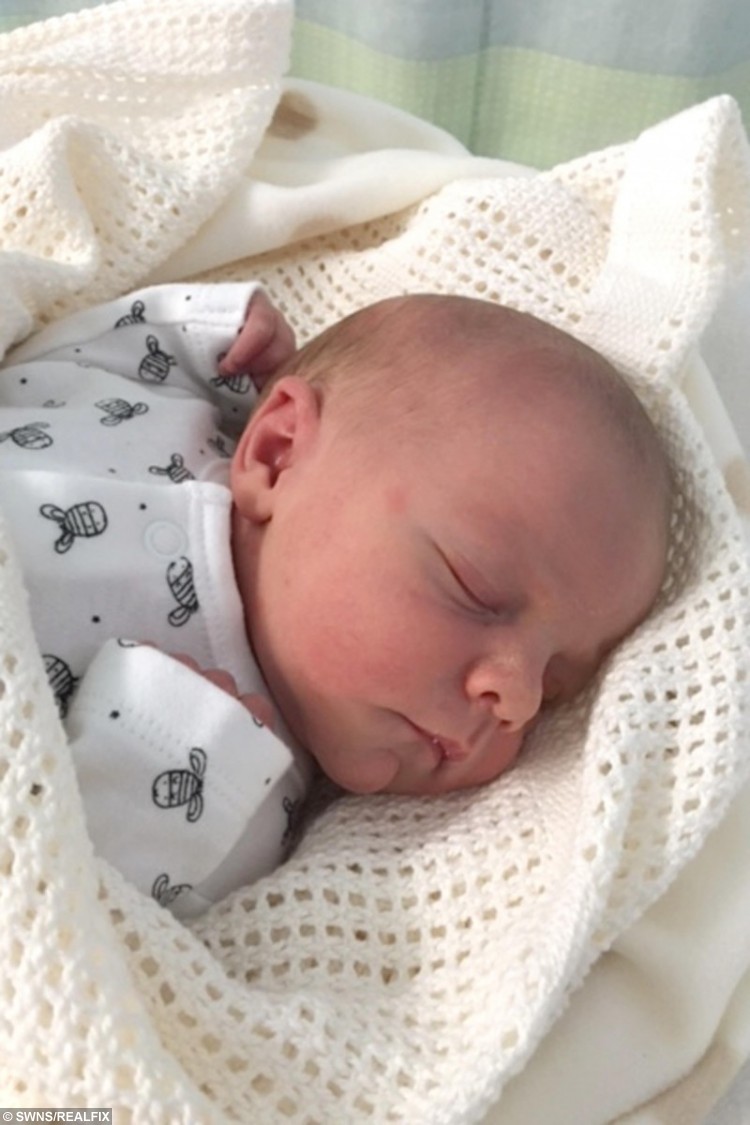 “Staff in the takeaway could see what was happening and suddenly I looked up and five women workers were standing around me giving me towels and offering me water.

“They lay me down and made sure I was sat up, and some of them looked after George and calmed him down.

“Noel was meant to be a caesarean, but I knew he was coming. Within 20 minutes he was out, I pretty much delivered him myself.

“The ambulance arrived at 8.25pm and the paramedics treated me for shock. I was just shaking – I couldn’t believe it.

“Then they took me to hospital with Noel for checks, and we stayed overnight before they let me go after the all clear.” 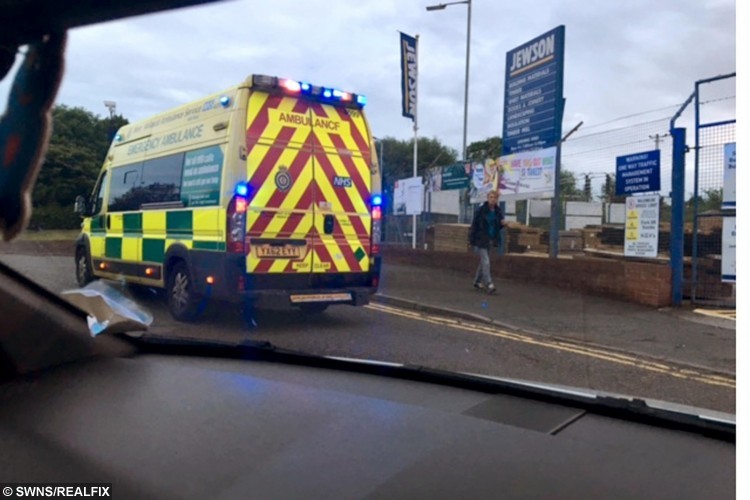 Noel is now well over 7lbs and staff at Domino’s let his brother design his own pizza for free last weekend when the family took their new arrival to meet the staff.

Gemma added: “I can’t thank those workers enough, they really calmed down George on the night and helped me when I needed it most.”