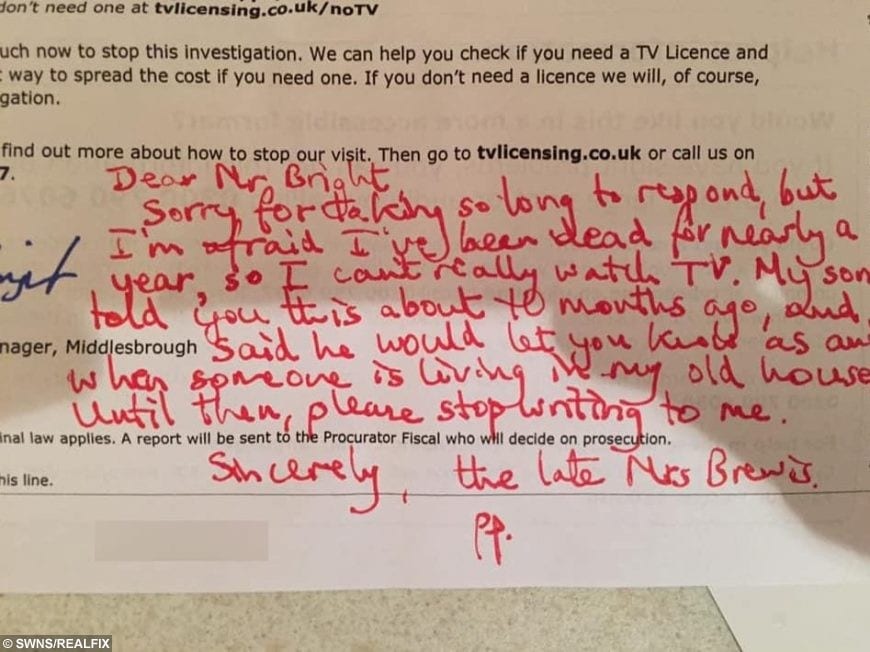 A bereaved son has hit back at TV Licensing after they sent threatening letters to his dead mum — by writing back as “the late Mrs Brewis”.

David Brewis’ mum Dorothy passed away from a stroke in November 2017 and he informed TV Licensing within weeks, cancelling her payment.

But he said TV Licensing continued to hound her empty address with letters demanding she pay – eventually threatening legal action.

The agency sent seven letters to his mother Dorothy’s old home between July 2018 and this month.

Teacher David from Windsor, Berks., got so fed up he took matters into his own hands – repeatedly writing back as “the late Mrs Brewis”.

“My son will let you know if that changes. Please leave him alone.

Yours, the late Mrs Brewis.”

And in another reply to a further letter this month he said: “Sorry, I’m still dead, and so don’t really watch much telly. Please leave me and my son alone.

“Yours, the late Mrs Brewis.”

Chemistry teacher David said his replies were meant to be “tongue-in-cheek” as well as “slightly passive aggressive”.

He said: “This is about the only field in modern life where we are asked to prove that you’re not breaking the law by secretly watching TV.

“Normally the state is inaccessible, and when we want it, we can’t easily reach it.

“But it has no problem intervening on relatively trivial matters such as this. They have no issue with sending threatening letters.

“These kind of letters, by the way, go to elderly people too. Can you imagine what kind of shock it would be to get a note like this at 70 or 80?

“There is a heavily implied presumption of guilt – over TV.”

David said his mother’s empty address in Durham received four letters from the government-run authority between July and October 2018.

They threatened the “current occupier” with £1,000 fines if they failed to renew in time.

David responded as “the late Mrs Brewis” in October 2018, and TV Licensing fell silent – until August, he said.

David drafted another sarcastic note back to TV Licensing – again posing as his late mum.

In his August letter, David edited their note, crossing out “we understand you may be busy” and replacing it with “dead”.

And where they wrote “of course, if you don’t need a licence”, he’s annotated and underlined: “Because you’re dead”.

David’s letter said: “As my son has told you – several times now – I am, unfortunately, dead.

“He will let you know if either I come back to life and start watching TV again, or if anyone else starts living here.

“In the meantime, please leave him alone.

He replied to further letters last month and in recent weeks.

He posted his replied on Twitter, where it users branded the authority “Incompetent clowns” and “Lazy Bandits”.

TV Licensing apologised to David for causing “distress” – but maintained it had a duty to enquire if the properties of the deceased were still unoccupied.

A spokesperson explained: “After Mr Brewis informed us that his mother had sadly passed away we recorded the property as being unoccupied and stopped any correspondence to the address for some time.

“We have a duty to write to unoccupied properties after a period of time so we are able to establish whether it remains unoccupied or whether new residents are occupying the property – that’s why these letters are not addressed to a named person.

“We are very sorry to Mr Brewis for any distress these letters may have caused and we have cancelled any further correspondence to this address for a further 12 months.”