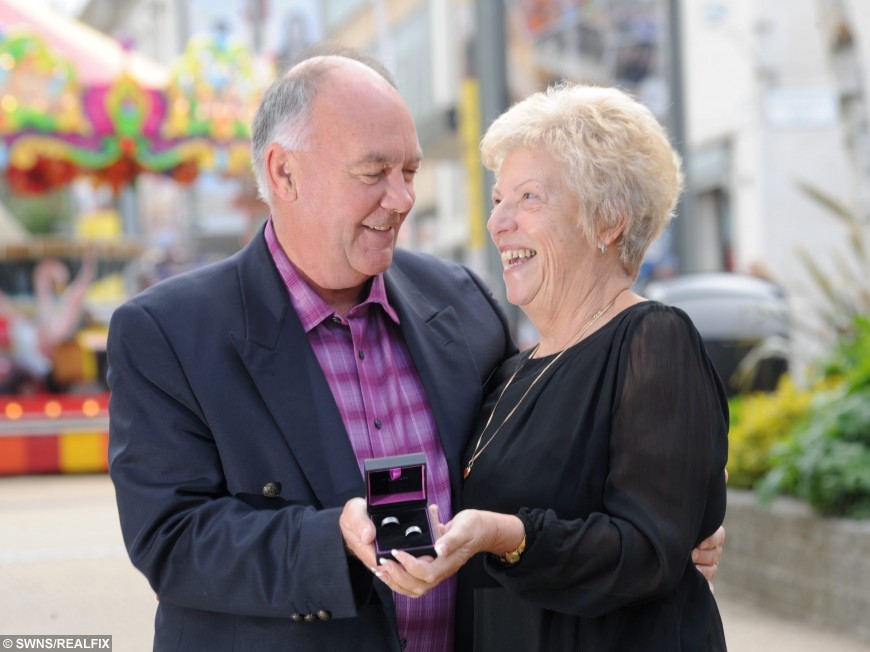 A couple have rekindled their childhood romance and are to marry – more than half a century after being torn apart as lovestruck teenagers.

Paul Antis, 68, first met Gloria nee Jenkins, 67, and fell in love when they were at school together. 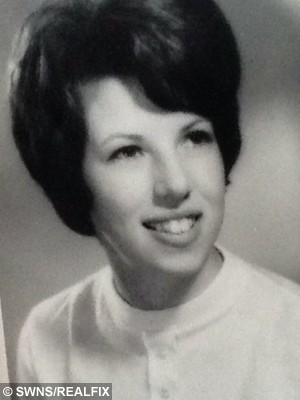 But their relationship fell apart when Gloria’s disapproving mother burned Paul’s letters to her and they moved on and grew up apart then had families of their own.

Now – 55 years on – the couple are to tie the knot following the death of Gloria’s husband and Paul’s divorce.

The couple even flew flew halfway round the world from Australia to select the wedding rings in Plymouth, Devon, where they first met in 1960.

The lovebirds first met at Plympton Grammar School in Plymouth 1960 when Paul was 13 and Gloria just 12-years-old.

Friendship grew into love and the pair were inseparable throughout their early school life – until Paul saved up his pocket money to buy Gloria a friendship ring.

Paul said: “It was one of those kinds of moments where you caught sight of each other across the playground.

“We became friendly on the school bus after that and then eventually plucked up the courage to ask her to go to the pictures.”

The pair were inseparable throughout their school life and on Gloria’s 14th birthday Paul decided he wanted to buy her a friendship ring, to show her his true feelings.

He said: “I saved up my pocket money for three months and used that to buy a friendship ring.

“It was Gloria’s 14th birthday and we really were pretty serious about being boyfriend and girlfriend so it was just an opportunity to express how I felt about her.”

The relationship faultered, however, when Paul became an officer in the Merchant Navy and Gloria moved to Essex with her family. 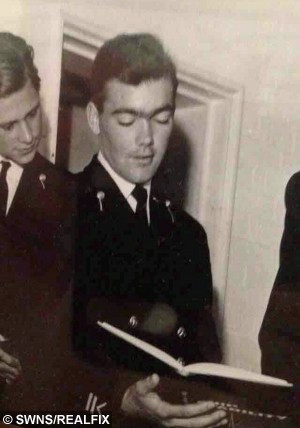 Initially the couple tried to make things work, but when Gloria’s mother intervened the relationship came to an end.

Paul said: “I would come home from sea, the ship would dock in London. I would go straight to see Gloria but only briefly for a couple of hours because then I would have to go visit my parents in Plymouth.

“Then one trip I went there and her mother took me to one side and said that it wasn’t doing Gloria any good.”

Gloria tried to write to Paul while he was away, but got his address wrong and the letters never reached him.

He assumed she had taken her mother’s advice and ended the relationship.

Paul said: “She failed to put the name of my ship on her letters so they never reached me.

“I was going up the West Coast of America thinking it was strange I hadn’t heard from her and I thought it was just that her mother had got to her.

“I wrote to her saying ‘Okay if it’s over, it’s over’ and of course Gloria didn’t realise that I hadn’t got her letters.”

The letters were eventually returned to her address in a big bundle, but Gloria never received them, and it later emerged her mother had burned them.

Thinking that Paul had moved on and started a new life without her, Gloria decided to do the same and when he returned to England he heard she had married someone else.

“I came back from sea after 18 months and thought it was rubbish that we weren’t together so I phoned her up to ask her to marry me but her mother told me she had got married the week before.”

Paul then emigrated to Australia where he built a life for himself, later marrying and having five children, while Gloria had four children with her husband in Essex. 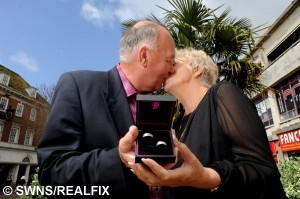 Paul and Gloria picking up their wedding rings

The pair remained estranged until two years ago, when Gloria contacted divorcee Paul to tell him her husband had passed away.

Paul said: “I realised it was a chance that we could be together. I came straight over and met her and, as I had always dreamt, it was amazing.

“In reality it could have been a disaster but it is better than amazing – we were still the same silly kids from the moors.

“We just feel as though we are destined to be together and now that we are we realise that it’s a match made in heaven.”

Paul and Gloria will be married near their new home in Melbourne, Australia, on June 19.

« Previous post You'll never guess what was stuck up this man's nose! It shot out after 44 years when he sneezed
Next article » Agoraphobic finally leaves home after a decade then plunges down manhole