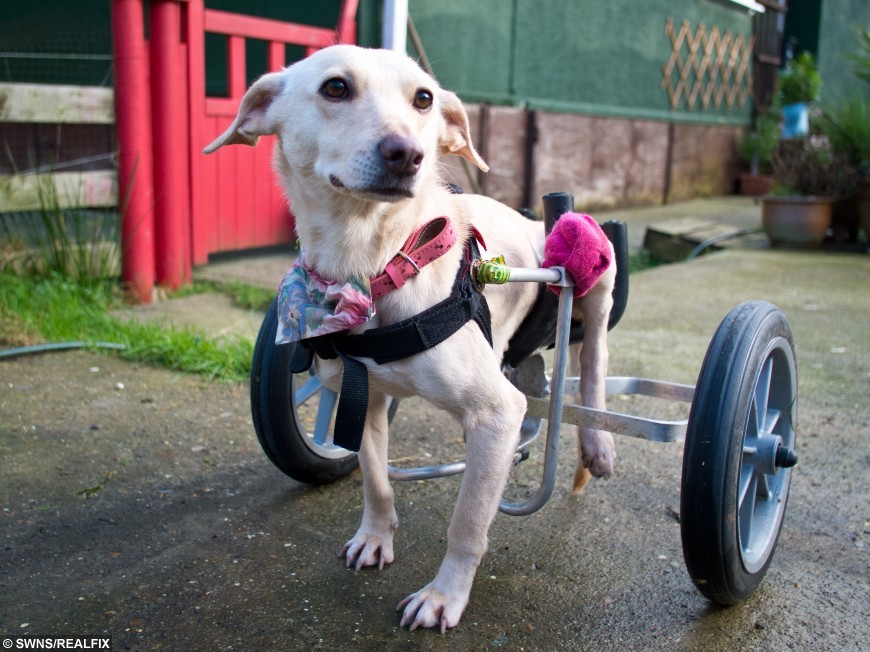 A disabled dog rescued by an animal-loving couple from appalling conditions in India is now enjoying UK life with a smart new set of wheels.

Animal-loving couple Angela and Ian Szczypka spent £2,300 flying 18-month-old mongrel Indy back from Goa after spotting her on holiday.

Despite their plans to relax on the beach, the Szczypkas fell in love with the injured puppy during a visit to a rescue centre, where they witnessed “shocking” conditions.

The two-month-old pup had lost the use of her back legs after suffering a horrific attack by another dog. 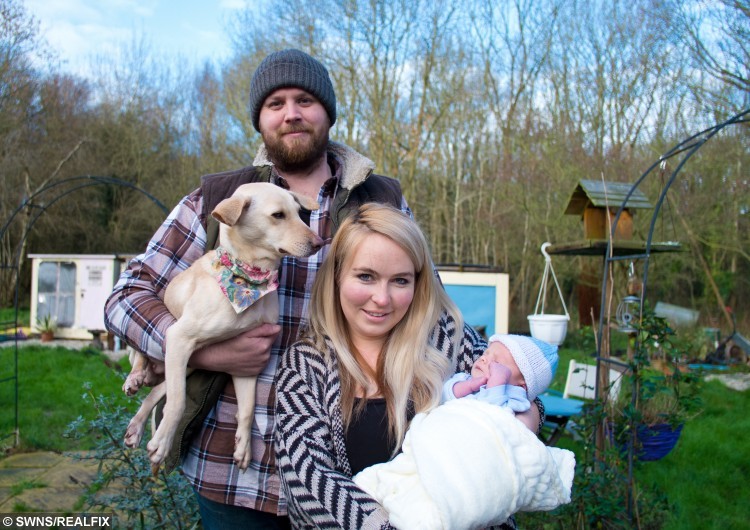 Angela and Ian with baby Tobias and Indy 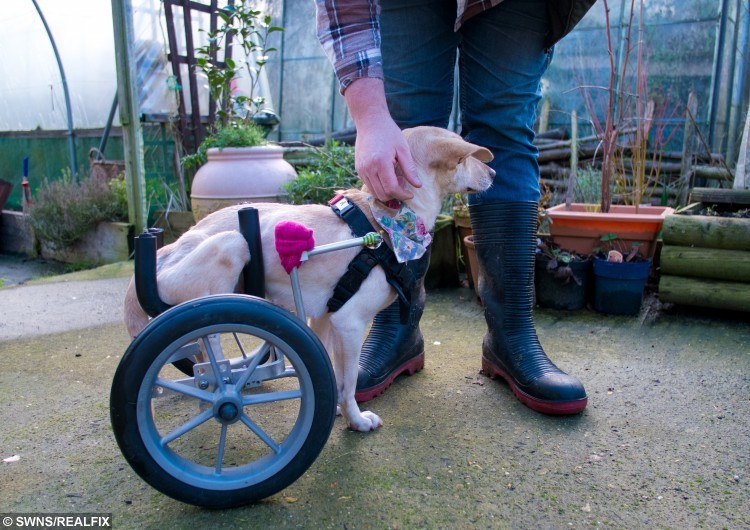 Angela and Ian, who have their own smallholding of animals back at home, were so moved by the sight of Indy that they returned to volunteer at the centre every day until they left.

Angela, 29, described the moment she and her husband locked eyes on the sorry pup.

She said: “We went to India at Christmas in 2014 for a month. We were going to go for a nice relaxing beach holiday. But we saw photos of an animal rescue centre and we wanted to go and visit.

“We’ve got a smallholding here in the UK with chickens, rabbits, dogs, cats. So we like our animals.

“We were quite shocked by what we saw there. It was basically this big compound. They were all fed and looked after there, but it was quite graphic.

“Indy was the saddest looking dog there. She had had a broken back, so was just dragging her back legs around. We were told she’d been attacked by a bigger dog.

“Coming from England we’d never seen a dog in a state like that before. There were trails of bloody where we was dragging her legs along the concrete, and flies were following her around.

“She was just a frightened little dog that sat in the corner. Other puppies were hanging on her back legs. It was just terrible.” 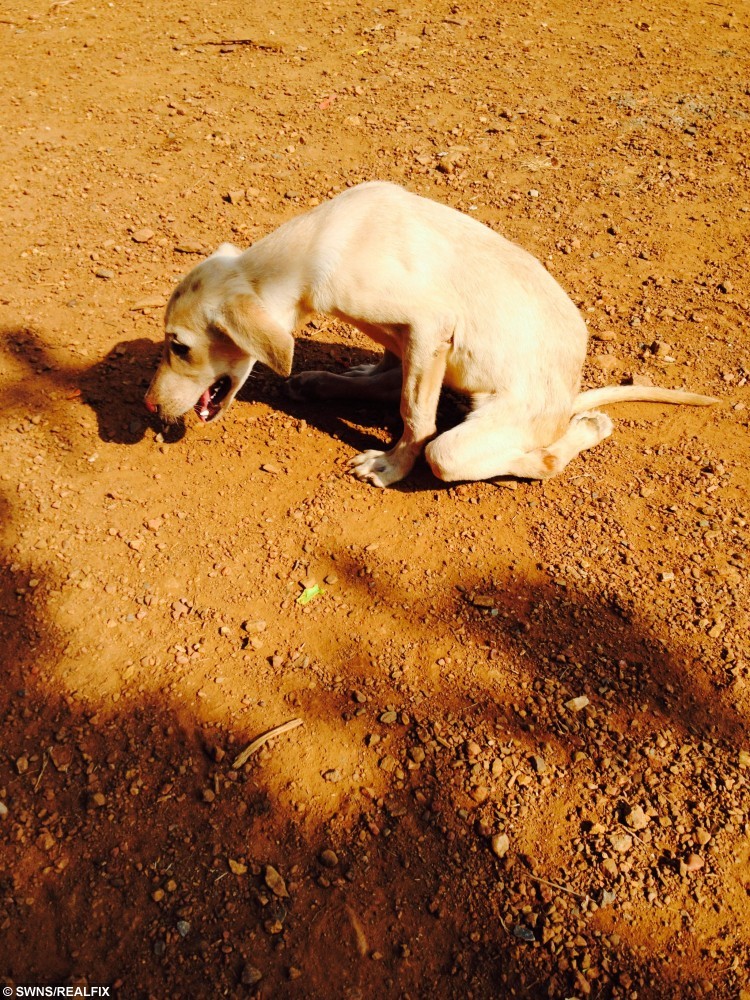 Indy in Goa, India, with her badly injured back legs 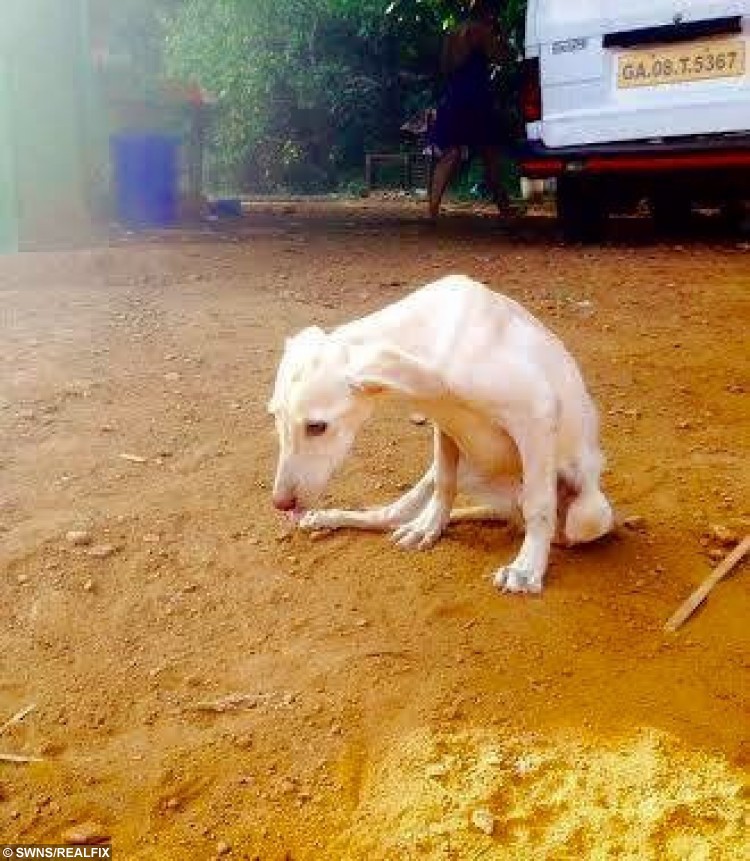 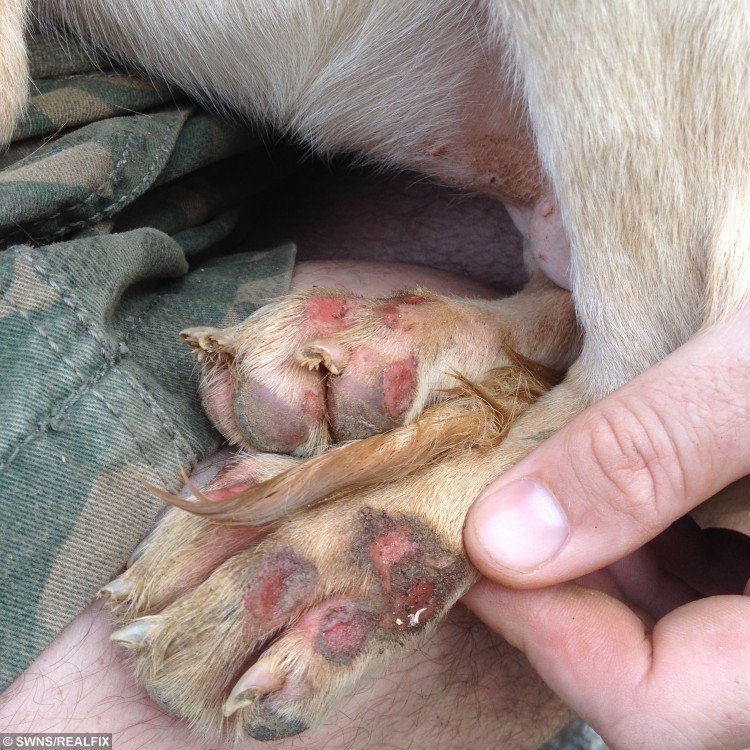 The 29-year-old told of how she and her husband developed a relationship with the injured dog.

She said: “We went to the rescue centre every day to volunteer and walk the dogs for a few hours every morning. We started trying to think of a way we could walk Indy, so we came back with a towel one day and put it under her bottom so her back legs were lifted and she could walk.

“She got to know us and she got happier in herself. We could see that she was improving quite a bit. She had more life in her because she was so depressed before.

“So we decided to adopt her and take her home, which was completely crazy. We already had two dogs, two cats and all the other animals. But we didn’t really want to leave her behind.”

It was nine months before Indy arrived in the UK and Angela described the emotional reunion.

She said: “It took nine months to get her here. We paid for her to go to a daycare centre in India for £3 a day. By the time she got her flight here she’d put a bit of weight on and could get around a bit better.

“We picked her up from the airport in September and it was amazing. She was so overwhelmed she walked straight into the glass doors! But she recognised us which was lovely.

“Because she can’t wag her tail, our other dogs found her body language quite hard to read at first. But now they’re best of friends. She’s as good as gold and she’s doing really well. She’s been through so much in life that she’s quite easygoing.

“She’s on a really strict raw diet now, because she’s partially incontinent. It was chaos for about two months. We had to put her in nappies, children’s tights, leggings. Now she’s out of nappies and very recently she’s just started to ask to go to the toilet. I think she was just fed a lot of curry in India and it took a while to get it out of her system!

“Now she goes for a walk every morning and loves to spend her days under a blanket by the radiator.” 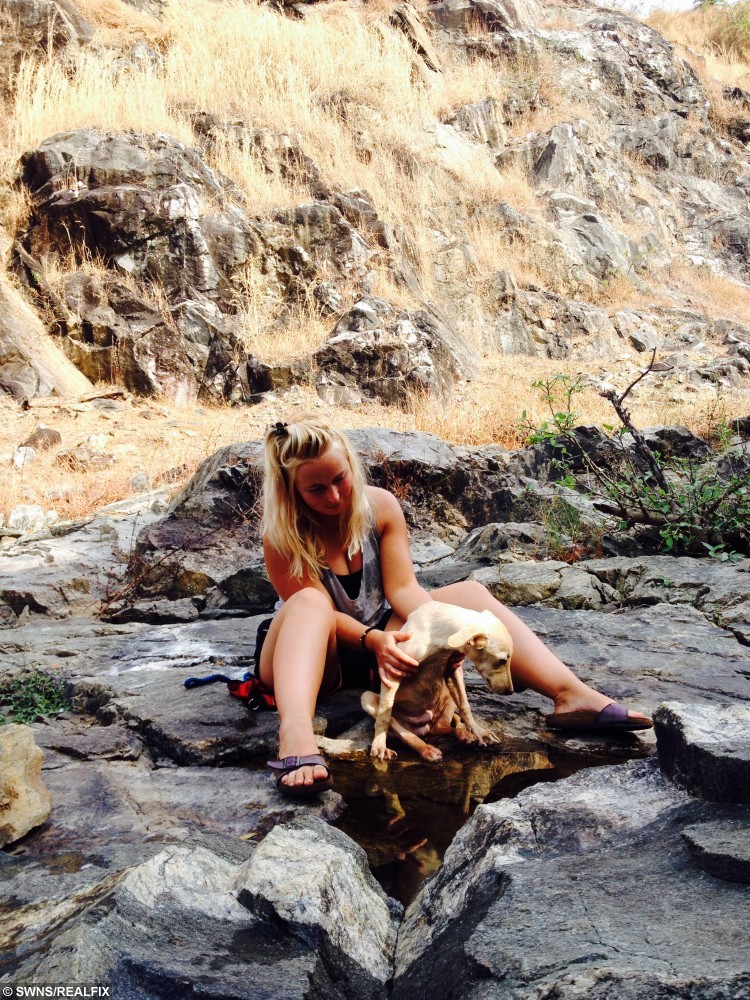 The couple fell in love with Indy in Goa 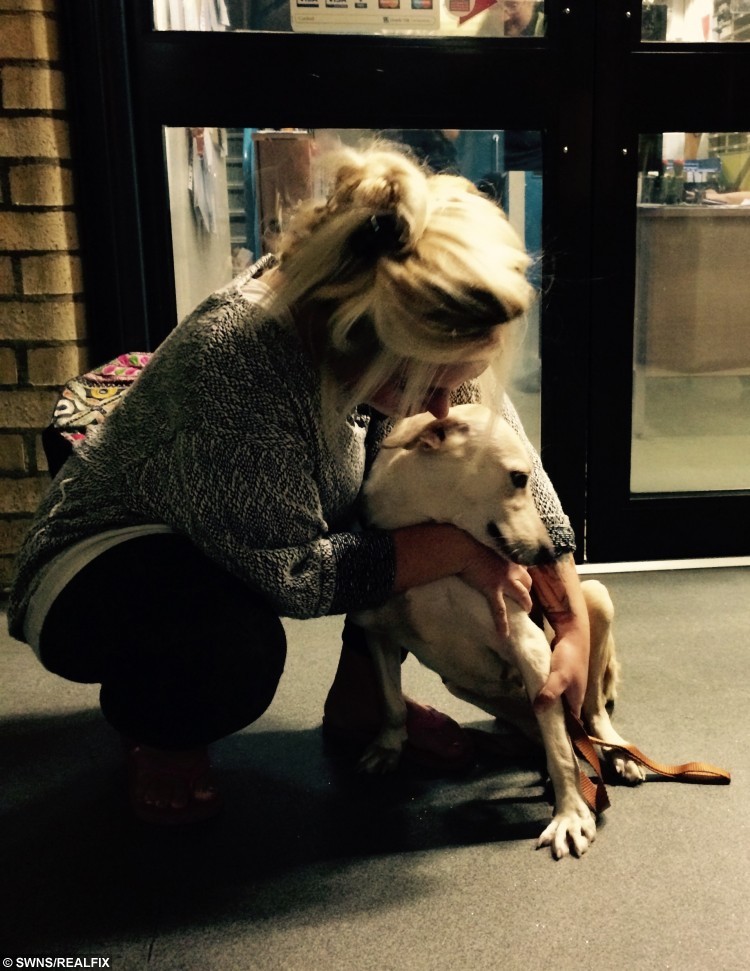 Angela picking Indy up at the airport

Angela described the amazing moment little Indy was given a special wheelchair to help her walk.

She said: “A man in Kent made us a wheelchair for £300. He’s amazing. He makes ski wheelchairs for dogs in Sweden, and for dogs all over the world. It took a while to get it made because Indy’s got a funny body shape. She’s a bit like a seal when she walks.

“But as soon as she got the wheels she was off. She runs around in it all the time. She runs along the beach, in the woods where we live, and on all terrains. She’s had one accident when she decided to chase a squirrel up a tree but fell backwards and ended up on her back. She was fine but looked a bit peeved.

“But she’s much better behaved than the other dogs. She get a lot of attention when we’re out. Everyone wants to know her story.”

Angela and Ian have already spent more than £2,300 on Indy, which includes her time in an Indian daycare centre, flights, vet bills, her wheelchair and other equipment including a special pair of trainers.

And there is hope that the 18-month-old pooch may one day be able to walk again, after vets discovered that she can still wag her tail. 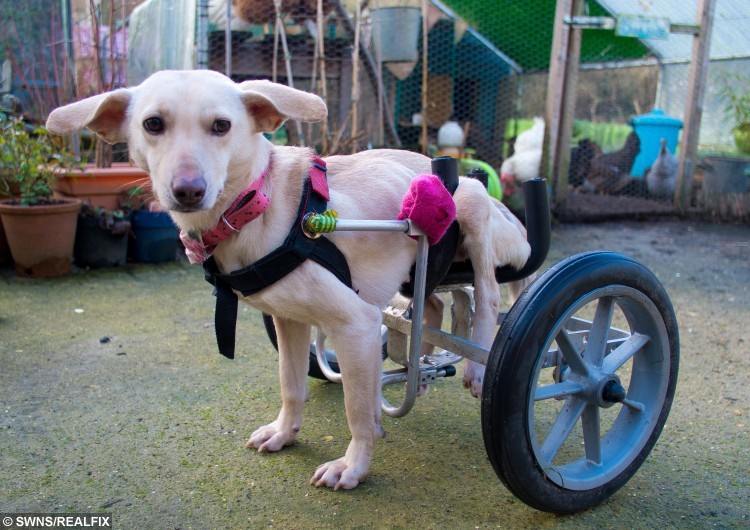 The Szczypkas, from Benfleet in Essex, are now fundraising so that Indy can see a ‘supervet’ who may be able to help with her mobility.

Angela said: “We took her to the vets to get spayed and he noticed that she can still wag her tail. A lot of vets wouldn’t believe us, but she happened to wag it while we were there. He said that because she can wag her tail, she should get x-rayed, so we paid for that.

“It showed that her back wasn’t completely broken – there was a tiny bit still attached. He suggested that we go and see a supervet – that there was a little bit of hope. He’s down in Surrey and the consultation fee alone just for the initial appointment is £250.

“Once we’ve figured out whether there’s something they can do, it would be thousands of pounds for any treatment. But we’re not going to worry about that just yet.

“It’s been quite an expensive process, so we set up a Facebook page and a Go Fund Me page for the £250. There’s been a really good response. So far we’ve raised about £100. It just shows there are a lot of kind people in the world. People are really interested.”

To follow Indy’s progress, visit Facebook/theindyfund and to donate to her fund, go to www.gofundme.com/theindyfund.

« Previous post Emotional moment Oskar takes his first steps in front of the football fans who enabled him to walk
Next article » Super-slimmer is back in wedding dress she wore 38 YEARS AGO!