HomeFamiliesMost PopularIdentical twins who married on the same day will bury their husbands at a shared funeral – after they died just ONE day apart. 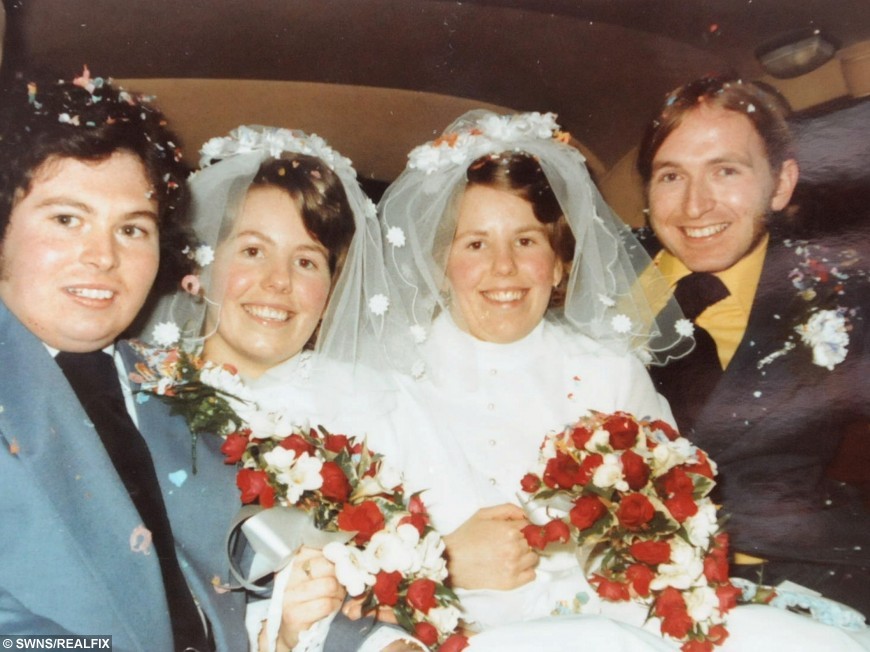 Identical twins who married on the same day will now bury their husbands at a shared funeral – after they died just ONE day apart.

Lynda Tomlinson and Ann Ross, both 61, even met their respective spouses on the same day when the pair approached them on the dancefloor of their favourite club.

Remarkably, the two couples got engaged on May 13, 1973 before the twins were both married together when they were aged 20 on February 15, 1975.

The sisters, who both work as dinnerladies and cleaners at the same school, while Ron was a polisher at Rolls-Royce and Derrick was a driver.

But Derrick was forced to stop working eight years ago because of diabetes which saw him lose all of his toes and then his left leg.

Tragically, Ron – who was diagnosed with bowel cancer a year ago – died the day after his 64th birthday on February 7 at Royal Derby Hospital.

Derrick, who suffered a heart attack and a stroke as well as kidney problems and blood poisoning then passed away aged 61 at the same hospital just a day later.

Lynda and Ann will now bury their husbands, who grew up living next door to each other, in a joint service. 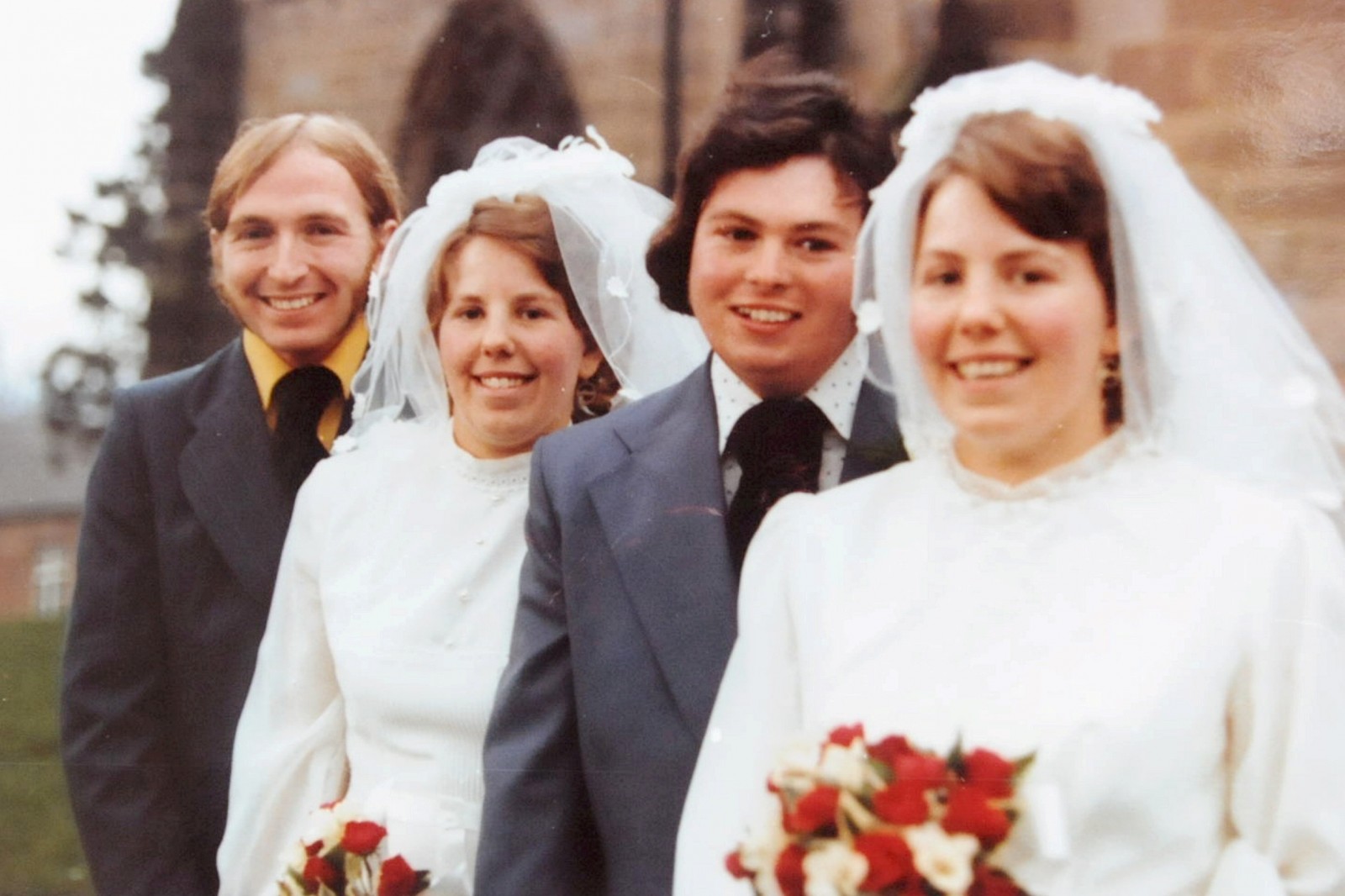 The heartbroken twins said they even both slept at the hospital where the two men were in different wards, for the last couple of days.

Mum-of-three Ann, who lives in Chaddesden, Derby, said: “At least they have gone together.

“If it would have happened a month or two apart then we would have gone through it all again.

“We travelled all over the world together, that’s what I’ll miss the most.

“He always bought me flowers and a card on Valentine’s Day. I’ve lost my husband and my best friend.”

Gran-of-six Lynda, who lives in Spondon, Derby, added: “We both slept there for the last couple of nights, I couldn’t have done it on my own.

“When Derrick was took ill with kidney problems I used to visit him and then I would go to the Macmillan Unit to visit Ron and Ann would come down and we would swap.

“It is a miracle that they have been take together, our special bond has twins has definitely helped us cope with it together.

“I loved Derrick to bits and will miss him forever.

“We did everything together, I don’t know how I’ll do it now he’s gone. This is the saddest time of my life.” 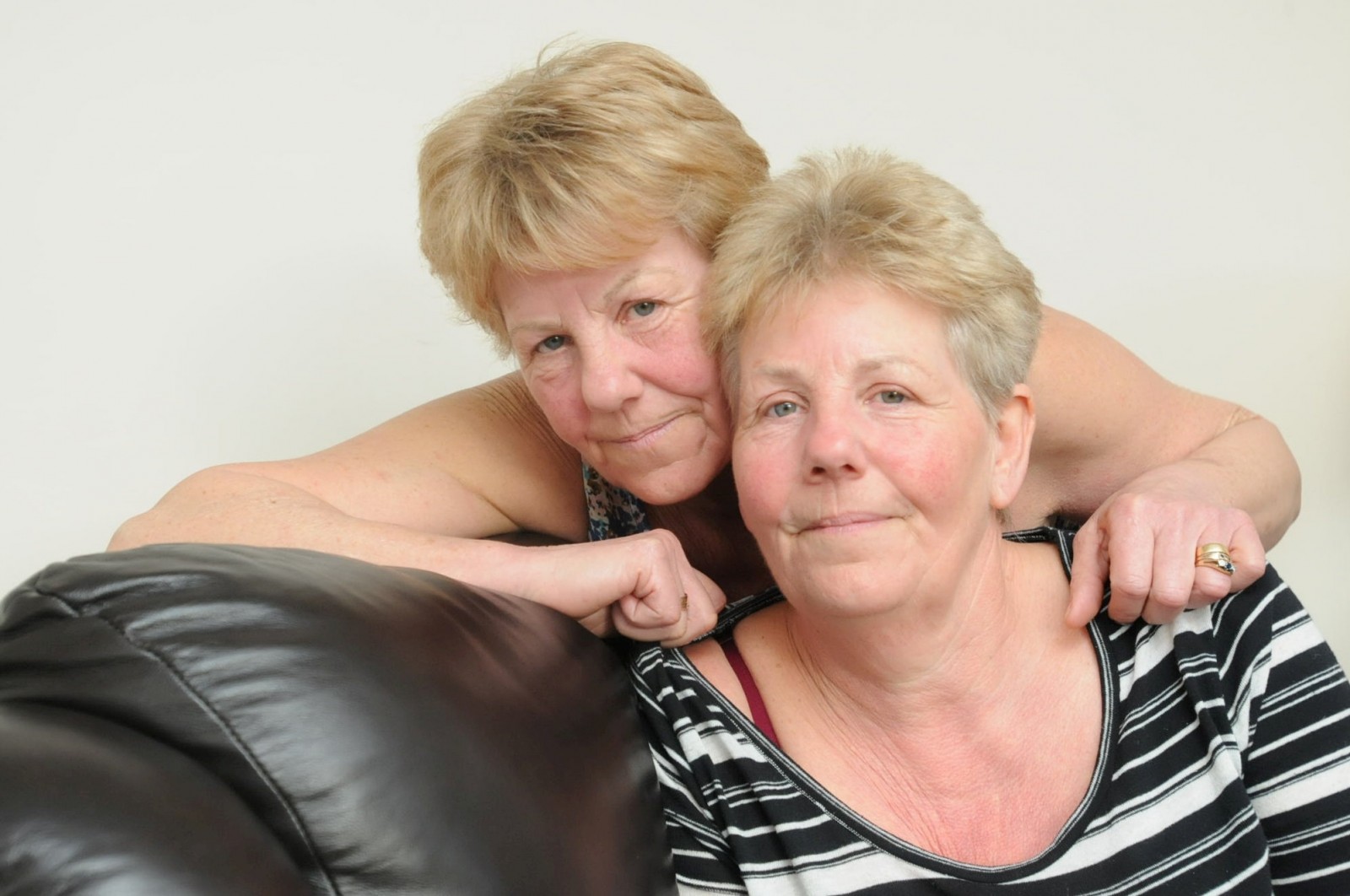 As well as his wife Lynda, Derrick leaves behind two daughters, Marie Freeman, 37, and Sarah Stayley, 35, and six grandchildren aged between four and 17.

Ron leaves behind Ann and their three children, Andrew, 31, Adam, 28, and 23-year-old Lindsay.

The twins both met their husbands, who loved going to watch their beloved Derby County FC, at their favourite nightclub Tiffany’s in Derby.

Ann, who grew up with her sister in Spondon, said: “We were dancing on the dancefloor.

“I remember seeing Ron standing there with a pint of beer, because they didn’t dance, then they offered to buy us a drink.”

Lynda added: “Ron was quieter whereas Derrick used to talk a lot more.

“Me and Ann used to dress the same and everything so one time when we were in the toilet we decided to swap to see if they’d notice.

“We went back down and sat in each other’s seats. Eventually they cottoned on after about 10 minutes, I can’t remember why but they realised at the same time.”

The twins were then both walked down the aisle by their father at the same time when they got married at St Werburgh’s Church in Spondon.

Ann said: “My dad walked us both down the aisle that day. Derrick trod on Lynda’s dress so she had to yank it up.

“We had the reception at the Railway Institute in Wellington Street.

“I remember we paid for a buffet for 200 people and when it came out there was only enough food for about 20 of us.”

Speaking about Derrick’s battle with diabetes, Lynda added: “He lost all of his toes and eventually lost his left leg, so he couldn’t work.

“He was housebound a lot of the time because of his leg but he loved his grandchildren so much and spent so much time with them.” 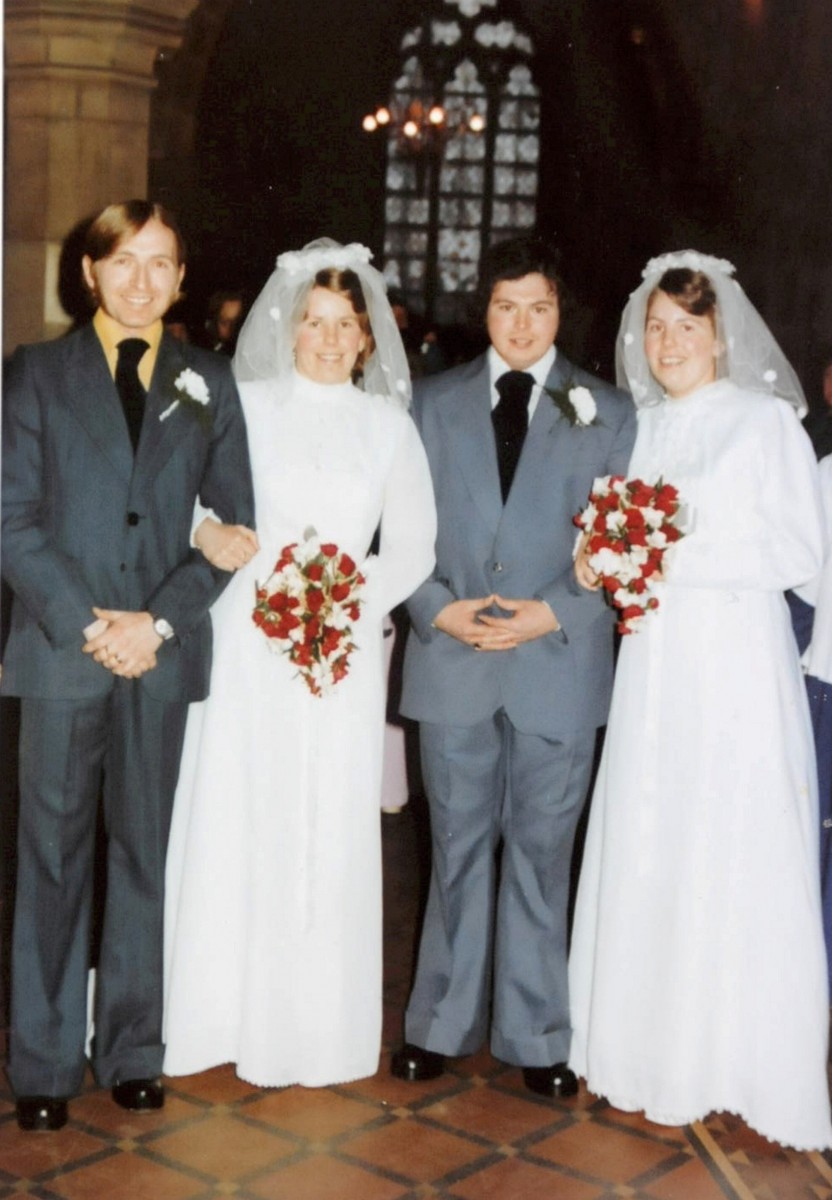 After getting engaged and married on the same day, the brothers-in-law will also share a funeral

Ron, who suffered from bowel cancer, was admitted to the Royal Derby Hospital on Christmas Day last year.

Ann said: “He had chemotherapy for six months but the doctors told us it wasn’t shrinking.

“They told us he only had a few weeks to live.

“He opened his Christmas presents in the Macmillan Unit.

“He cried when he saw the Kevin Hector picture I had bought him, he loved them all so much.”

A funeral service will be held for the pair at Markeaton Crematorium in Derby at 10am on Wednesday.

Guests are asked to wear bright colours and any contributions will be given to Macmillan Cancer Support.