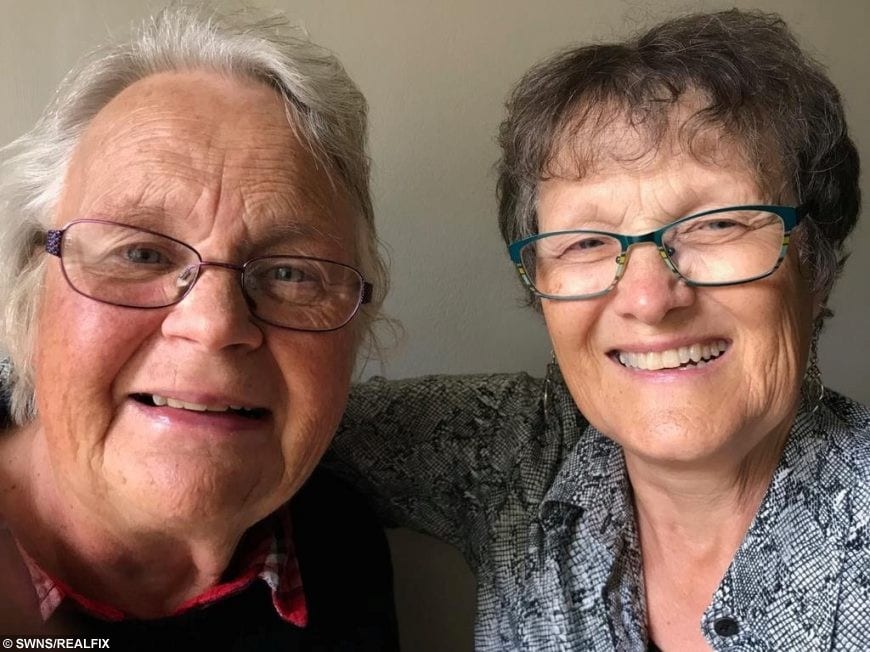 A grandmother has finally met a sister she never knew she had – and uncovered the truth about their war hero dad which had been kept secret for over 70 years.

Rilba Jones, 79, and Mary Brand, 73, met up after they uploaded their DNA to a genealogy website and discovered each other – despite living 3,500 miles apart.

Mrs Jones, of Hull, East Yorks., said she always questioned the truth about who her father was, after being told by her mother that he was a Flight Lieutenant who was killed during the Second World War when she was just two.

Her suspicions proved to be correct, when it was revealed that her real dad was a war-time hero who played a part in the famous “Wooden Horse” escape from German prisoner-of-war camp Stalag Luft III.

As a teenager, her attempts to investigate the matter further were always rebuffed by her mum and the issue was put to bed.

But her daughters, Charlotte and Harriet, bought her an ancestry.com membership for Christmas in 2018 and she made the “life-changing” discovery.

In a twist of fate, Mrs Brand, from Ontario, Canada, had also been searching for long-lost family when she found her English half-sister.

Mrs Brand made multiple attempts to get in contact after Mrs Jones was flagged up as a potential first cousin – but Mrs Jones ignored them believing they were a scam.

Desperate for a response, Mrs Brand asked her daughter to send a last ditch message to see if she’d get a response which prompted Mrs Jones to put her own daughter on the case.

Just a few days later Mrs Jones received a phone call from her daughter Harriet who revealed that “I found your dad”.

Mrs Jones, a retired nurse, said: “I’ve wondered all my life about my identity and this has been life changing.

“I was only really looking to see what my ethnicity was. I thought I might find out I was Danish or Swedish, but it turns out I’m actually mostly Scottish.

“All of sudden Mary’s at my doorstep and I couldn’t have felt more at home – I got such a warm welcome.

“It’s better late than never. I couldn’t believe it, I’d been waiting for this moment for over 70 years.

“I was so pleased to learn who my father was – he led such an interesting life and was a war hero.

“I didn’t know what to expect all those years wondering and searching for answers – but it wasn’t this.

“Now I can tell everyone I’m half-Canadian.”

Daughters Harriet, 44, and Charlotte, 40, thought the gift could help their mum find answers she’d sought after he whole life.

Harriet said: “When we bought my mum the DNA test I secretly longed for answers about her identity.

“I wanted them for her, because I knew she was troubled by not knowing. Six months after giving the test to her the answers came.

“We were utterly bowled over to discover how all of our identities had been determined by DNA. Meeting Mary was the icing on the cake.”

She added: “I thought there was no way this was right, as I knew all of my cousins and half cousins – I didn’t trust the website.

“Then a younger person emailed me and I thought I’d let my daughter speak to her, as I thought it was a scam.

“My daughter then called me to say she found my dad. It was a stunning phone call, I just couldn’t believe it.

“I spent so much of my youth trying to find this man, but when you don’t find answers you just give up.

As a youngster Mrs Jones was told her father was Flight Lieutenant Blair White, who was shot down and killed in the invasion of Sicily in 1943, when she was just two.

But when she was 14 she’s been sent into a back bedroom as a punishment where she discovered an account which had been locked away which revealed her mother’s secret pregnancy and subsequent efforts by relatives to find a “suitable” husband.

When she confronted her mum with her new information, she was immediately shut down and they never spoke about it again.

Her real father was John Norman Harris, who left Canada to join the RAF in 1937 – and probably met Mrs Jones’ mother when he was being treated for injuries at Torbay Hospital in Torquay in 1939.

Flight Lieutenant Harris’s plane was shot down in 1942 during a raid on Hamburg and he spent the rest of the war at the Luftwaffe-run camp Stalag Luft III, which held captured Western Allied air force personnel.

In 1943 prisoners constructed a gymnastic vaulting horse to disguise men, tools and containers of soil, while a tunnel was dug, allowing three men to escape to safety.

Mr Harris’s role in the break-out was re-enacted in the 1950 film The Wooden Horse.

After the War he returned to Canada and went on to have four more children.

A talented writer, he was best-known for his mystery novel The Weird World of Wes Beattie, published shortly before his death in 1964.

Mrs Brand, a keen investigator of her own family history, said she’d already uploaded her own DNA to ancestry.com when Mrs Jones’ details flagged up as a possible first cousin.

She then devoted months to contacting her potential family member before she finally received a response.

It wasn’t long after that she made the 3,500 mile voyage to meet her – and she now plans to attend Mrs Jones’ 80th birthday later this year.

Mrs Brand said: “My daughter Googled her, and we found her right away. She looks very much like my older sister Elizabeth and my younger brother John.

“Meeting Rilba was like a wonderful gift from our father. He has been dead for 55 years, but now I have another piece of him.

The two sisters speak regularly, exchanging emails and stories from their lives, patching together pieces that were once missing.