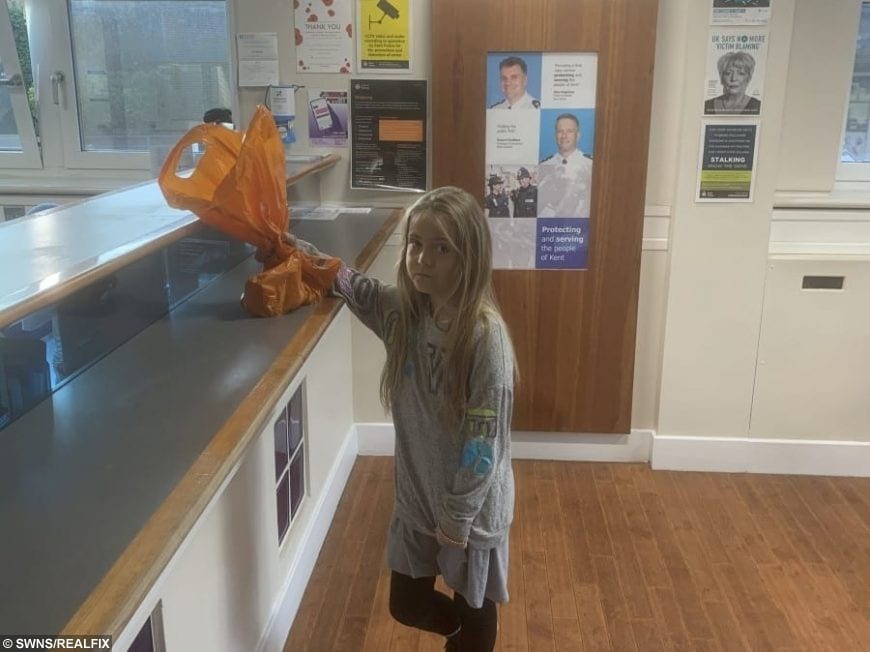 A little girl was forced to break into her piggy bank to pay a police fee after officers impounded her HORSE.

Eight-year-old Sahara Treeby emptied her Christmas savings when she heard police needed £500 to release her pony Poppy and her mum’s horse Bumble after they were set free by thieves.

The horses had escaped from their yard in the middle of the night after a break-in at their stables and were found loose in the road in Sevenoaks Kent.

Sahara’s mum Angela Gibson received a call from Kent Police last Tuesday, who told her the horses had been found wandering along a road.

She was told Bumble and Poppy had been placed in safe-keeping with a contracted green yard and it would cost £500 for their release – despite the break-in.

Angela said: “My daughter was distraught and immediately gave me all her savings to help get her pony back.

“I explained I didn’t have £500 to hand so close to Christmas but said I could give them £150 now and the remainder after Christmas.

“But initially I was told it had to be the full amount even though their escape was the result of a burglary and a botched theft.

“I understand there is a cost for someone to collect the horses and look after them – but £500 for one day?”

Angela realised her yard had been broken into overnight when she returned to the stables.

The chain on the gate had been cut, tack had been stolen and ramps put up to the back of her horse lorry.

She said: “It looks as though the thieves tried to load our horses onto the lorry but they couldn’t get the motor started because it is fitted with an immobiliser.

“They either then let the horses loose or they escaped.”

Angela reported the break-in to police but was still told she would need to pay a £500 release fee.

She continued to call the police and was eventually told that the horses would be released to her for £150 “as a gesture of goodwill at Christmas.”

Police arranged for Angela to collect the horses from a nearby park and she was never given details of the green yard where her horses were held.

Kent Police say they finished their inquiries and the investigation is now closed.

Angela said: “Nobody even came out to look at my barn or the lorry but they say there is no evidence. What a joke.”

Insp Dave Smith, of Kent Police’s Rural Task Force, said: “Horses or ponies found wandering on a road are at risk of causing serious injury, therefore it is important action is taken straight away.

“Our officers in the rural task force, along with those working for the private contractor, carry microchip scanners and will make every effort to trace the owner.

“To avoid paying a fee it is really important that all owners ensure their animals are micro-chipped and the details registered are kept up-to-date so that contact can be made immediately following the discovery of a horse.

“If they cannot be identified and there is no available field or stable for the animal our officers will have no choice but to hand them over to the care of the company.

“Kent Police charges an initial fixed tariff based on a horse being recovered within seven days, however this fee is subject to change.

“It only partly covers the cost the force incurs for each animal seized and so it is important for everyone that owners are located quickly.”

« Previous post Holy Smokes! I fell Out Of My Third-Floor Window While I Was Having A Cigarette
Next article » 'Life Just Isn't Full Without A Dog In It - Right?!' -Friends Who Posted A Letter To Their Neighbour Asking To Take Their Dog For 'Walkies' Got Adorable Note Back